What happened to Huan the Wolfhound after he died?

I just finished reading the chapter of The Silmarillion devoted to Beren and Lúthien, which contains the greatest character in all of Tolkien's work, in my opinion: Huan, the Wolfhound of the Valar. He catches arrows midflight; kills countless werewolves; beats the living snot out of Sauron; scares Morgoth silly; turns on his former master when said master attempts to do evil; lets Lúthien ride him like a horse; dresses himself in a werewolf's hide to travel incognito; talks, but not so often that it gets annoying; never sleeps; and so on. 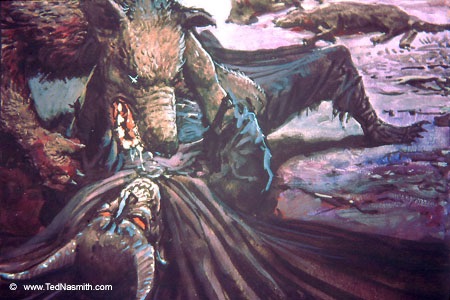 Sadly, he sacrifices himself to save the people he loves, and as a misanthrope who adores dogs more than anything else in the world, I need to know what happened to him afterwards.

Did Huan go to the Undying Lands, or even get reincarnated on Arda to hang out with Beren and Lúthien some more? 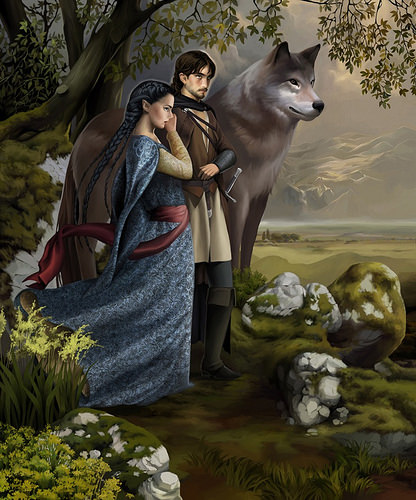 Yes. Huan is a Maia.

But true ‘rational’ creatures, ‘speaking peoples', are all of human / ‘humanoid’ form. Only the Valar and Maiar are intelligences that can assume forms of Arda at will. Huan and Sorontar could be Maiar — emissaries of Manwë.

Following the footnote, we find:

See p. 138. - At the bottom of the page bearing the brief text V (p. 389) my father jotted down the following, entirely unconnected with the matter of the text:

As one of the Maiar, Huan can never truly die. So whether he went back to the Valar on his death (most likely), or won't be seen again until the End, he'll be back.

I for one believe Huan is a Maia.

If that is true, then I believe his spirit lives on after his body has died, and is chained to Arda while Arda exists. I cannot tell if he would ever get reincarnated.

Regardless of whether Huan really is a Maia, I definitely do not believe he would get better quickly enough to meet Beren once again. The Silmarillion tells the story of the life of Beren until its end, and Huan meeting him again does not seem to match it. Also, when Huan died, he spoke for one last time to say goodbye to Beren, and he spoke only in the rarest occasions, and this would not qualify if they would see each other again.

My personal reasons for thinking Huan was a Maia aren't supported by canon, and aren't really convincing, so I won't describe them here. However, there's a word of god reference claiming he might be a Maia. En.wikipedia states this:

Tolkien wrote he was either a beast-shaped Maia or a common animal made to speak by the Valar.

And as the source of that, gives the following reference:

It would seem an awful lot of Maia spirits inhabited the Great Lands, if we accept that all talking, intelligent creatures were possessed of them. On the other hand, such creatures as Huan or other talking animals could be indeed just animals that were given some ability of speech and intelligence by the Powers (Eru, Valar, or even Morgoth himself for his evil creatures). For example, the stone trolls encountered by Bilbo & Co were made by Morgoth from stone and given some ability of speech and recognition. At the end of his life, Tolkien speculated that orc originated not in corrupted elves but in animals who were transformed by Morgoth and, again, given the faculty of speech and some intelligence.

If this idea is true, then Huan died like an animal, i.e. simply ceased to exist.

He catches arrows midflight; kills countless werewolves; beats the living snot out of Sauron; scares Morgoth silly; turns on his former master when said master attempts to do evil; lets Lúthien ride him like a horse; dresses himself in a werewolf's hide to travel incognito; talks, but not so often that it gets annoying; never sleeps

All of the proof you need that Huan is a Maia is in the above/original description. I don't think a common animal, even one given some intelligence or ability to speak by the Valar would scare Morgoth and defeat Sauron. To me, it's clear he is Maia and I agree he is an awesome and special character. I think he shares his fate with all of the other Maia.

Not the answer you're looking for? Browse other questions tagged tolkiens-legendarium the-silmarillion valar or ask your own question.

58
Did Balrogs have their own language?
6
What's the difference between the "spiritual" beings in Tolkien's universe?
9
How many of the Ainur were unable to change their physical form?
3
How many Maiar are there?