What is the first reference to a 3D printer in science fiction?

Considering 3D printing has really only just become a very accessible concept, I was wondering what is the first reference to a 3D printing machine of some description in science-fiction? I would prefer it to be a science fiction story where 3D printers operate in a manner similar to the way they do today (i.e. layer-by-layer printing), possibly where they are a regular home-appliance, but if the first reference to 3D printing in today's format is more like a new invention or used only commercially, that too is acceptable.

Passing the last bank of cabinets, he found himself facing a machine. It was complicated and bizarre and it was making a crystalline growth. Near it, another and different machine was manufacturing a small, horned lizard. There could be no doubt at all about the process of fabrication because both objects were halfmade and both progressed slightly even as he watched. In a couple of hours' time, perhaps less, they'd be finished, and all they'd need would be . . . would be--

The hairs stiffened on the back of his neck and he commenced to run. Endless machines, all different, all making different things, plants, bugs, birds and fungoids. It was done by electroponics, atom fed to atom like brick after brick to build a house. It wasn't synthesis because that's only assembly, and this was assembly plus growth in response to unknown laws. In each of these machines, he knew, was some key or code or cipher, some weird mastercontrol of unimaginable complexity, determining the patterns each was building and the patterns were infinitely variable.

Murray Leinster's "Things Pass By" has a man building a spaceship one layer at a time by spraying:

"But this constructor is both efficient and flexible. I feed magnetronic plastics — the stuff they make houses and ships of nowadays — into this moving arm. It makes drawings in the air following drawings it scans with photo-cells. But plastic comes out of the end of the drawing arm and hardens as it comes. This thing will start at one end of a ship or a house and build it complete to the other end, following drawings only."

1939: "The 4-Sided Triangle", a novelette by William F. Temple (later expanded into the novel Four-Sided Triangle), was first published in Amazing Stories, November 1939, available at the Internet Archive. A newly invented duplicating machine is used to duplicate diamonds, art objects, rabbits, and finally a woman. The author does not go into detail about how the machine works, as the story is not about the pseudoscience, it's about the social consequences of duplicating a person. At least it's clear from this description (emphasis added) that the copy is built up layer by layer, not instantaneously:

The quartz window, through which the three were looking, was set in a tall metal container, and just a few feet away was another container, identical even to the thickness of the window-glass.

Overhead was a complex assemblage of apparatus: bulbous, silvered tubes, small electric motors that hummed in various unexpected places, makeshift screens of zinc, roughly soldered, coils upon coils of wire, and a network of slung cables that made the place look like a creeper-tangled tropical jungle. A large dynamo churned out a steady roar in the corner, and a pair of wide sparkgaps crackled continuously, filling the laboratory with a weird, jumping blue light as the day waned outside the windows and the dusk crept in.

An intruder in the laboratory might have looked through the window of the other container and seen, standing on a steel frame in a cubical chamber, an oil painting of 'Madame Croignette' by Boucher, delicately illuminated by concealed lights. He would not have known it, but the painting was standing in a vacuum.

If he had squeezed behind the trio at the other container and gazed through their window he would have seen an apparently identical sight: an oil painting of 'Madame Croignette' by Boucher, standing on a steel frame in a vacuum, delicately illuminated by concealed lights.

From which he would probably not gather much.

The catch was that the painting at which the three were gazing so intently was not quite the same as the one in the first container—not yet. There were minute differences in colour and proportion.

But gradually these differences were righting themselves, for the whole of the second canvas was being built up atom by atom, molecule by molecule, into an exactly identical twin of the one which had felt the brush of Francis Boucher. 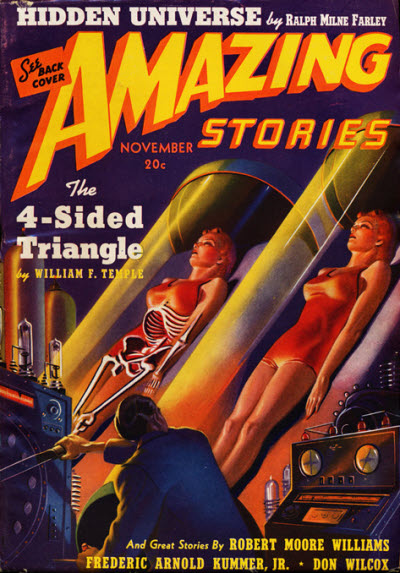 It seems surprisingly difficult to find such examples amongst science fiction films, television, and books / stories. I interpret the question in such a way that "3D printing" refers to the automated deposition and molding of layers of a material to fit a predetermined shape, and hence different from instantaneous materialization. So this rules out Star Trek-style replicators, etc.

Just in case someone else thinks about this too, I also want to mention that I ruled out The Jetsons (1962-1963), which featured a Star Trek-style food replicator. (Some believe that their device was a 3D food printer, but having reviewed clips of the show, I don't see any evidence of this.)

I also looked at the usual suspects such as Asimov, but there was nothing I could specifically pin down as "3D printing".

I have settled on:

In this film, synthetic skin is 3D-printed.

Here is a blurb on this:

Life imitates Darkman and the 3D skin printer is born

And here is a trailer that shows the printing in action:

Not the answer you're looking for? Browse other questions tagged history-of technology or ask your own question.