Which specific comic from the 1960's had the story of a man from Earth who was suddenly transported to an alien planet where he found alien machines which he used to return himself to Earth?

In the story-line I recall, the planet was uninhabited and the man from Earth had to build a working transporter from long-abandoned alien machines.

Adam Strange, a character in the DC universe, was first published in 1958. He was an archeologist, who was hit by a "zeta beam" from the planet Rann, which transported him there. He learns to use the technology there, and becomes a protector of the planet. The beams wears off and returns him to Earth. But the scientists of the planet have provide him with the information to figure out where the next beams will hit the Earth allowing him to return. 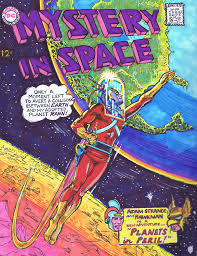 26
What is the name of the story where a guy goes to an alien planet to test a disintegration gun?
9
Short story about man using telekinetic remote viewer to wage war on alien planet
19
Man vs. Alien from an old anthology
5
Science fiction novel with a sentient (and morally conscious) planet. Possibly called “Rogue” or “Rogue Planet”
6
Young Adult (likely Christian-ish) Sci-Fi book - young man crashes in alien planet, attacked by a pterodactyl, dwells in caves
8
Old sci fi story about a ship that arrives on an alien planet and watches evolution from bacteria to whatever comes after man