Is there a list of the names used for Sauron in Lord of the Rings?

In the preface to The Lord of the Rings: A Reader's Companion, authors Wayne G. Hammond and Christina Scull mention a surprising fact:

Dr. Richard E. Blackwelder once counted in The Lord of the Rings 632 named individuals (of which 314 are in the Appendices), a number which soars to 1,648 when one adds titles, nicknames, and descriptive epithets (Sauron alone has 103).
- The Lord of the Rings: A Reader's Companion, p. xii

I can think of several names and epithets related to Sauron: The Dark Lord, the Enemy, the Lord of Mordor, the Eye, the Nameless, the Great Foe, and of course, he is in fact the title character of the series - the Lord of the Rings. In other works, he is called Mairon, Annatar, the Necromancer, the Fair, etc.

Robert Foster's Tolkien's World From A to Z: The Complete Guide to Middle-earth lists 32 titles, names, and epithets, only about a quarter of the number mentioned by Hammond, Scull, and Blackwelder. 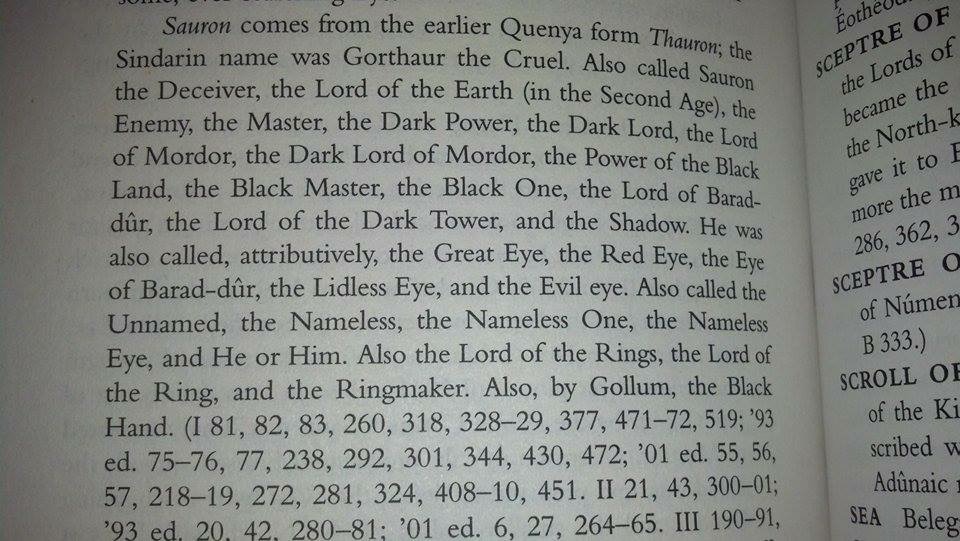 But still, if you had asked me how many titles, names, epithets, etc, are attributed to Sauron, I probably would have said something in the neighborhood of 20. I was shocked to read that the number is so much higher: 103!

Has anyone compiled a list of all these names, titles, epithets, and so on?

So I found myself with some free time this weekend.

Spoilers: I didn't reach 103; I managed 57, and that's with a fair degree of permissiveness (some variation of "the Power" appears close to a half-dozen times; my definition of "epitaph" is pretty loose, etc.). As always, I welcome expansions or corrections:

Blackwelder's chief work about Tolkien and Middle-Earth was A Tolkien Thesaurus, published in 1990; his other work on the topic was the shorter manuscript entitled Tolkien Phraseology. It was quite an extensive piece of work:

He spent four years compiling a concordance to the names of characters, animals, and plants in Tolkien's work, which was published in 1990 by Garland Press as A Tolkien Thesaurus. A fifteen-page companion booklet, Tolkien Phraseology, was published by Marquette in 1990.

I don't have A Tolkien Thesaurus, but I would bet anything that it contains the list of Sauron's 103 "titles, nicknames, and descriptive epithets".

Hammond and Scull do not cite where this claim of Blackwelder is from.

Of those three, A Tolkien Thesaurus, is really the only one that seems like it could fit the description. (The other two are about proverbs and newspaper imagery, respectively).

But I have looked in A Tolkien Thesaurus, and the entries there are a lot more like a concordance than a thesaurus. The entry for Sauron is fairly long, but it definitely does not contain 103 different nicknames.

My guess is that Blackwelder's list has not been published, and was either privately communicated to Hammond and Scull (who knew him personally), or was found among his notes which have been deposited at the Marquette University Library.

It not being published could explain why Hammond and Scull do not include a citation.

Don't forget all the early names for Sauron, including Thû and Tevildo, Prince of Cats.

(Interesting; the Lidless Eye that Frodo sees in the Mirror of Galadriel is described as a cat's eye with a fairly ordinary pupil, merely ringed with flame).

Not the answer you're looking for? Browse other questions tagged tolkiens-legendarium the-lord-of-the-rings names sauron or ask your own question.