I'm trying to identify a movie I watched back in the early-to-mid 80's on cable, most likely HBO or Showtime. In the movie, aliens visit a small town. The visit is witnessed by two children - a local boy and a girl whose parents had stopped in the town while on a road-trip.

a local man is behind the mutilations. He was abducted or changed when the aliens visited 25 years ago, and now works for the aliens by cutting up the cattle using a glowing rod of some kind. The rod resembles a lightsaber blade but you can hold it.

Unfortunately, I don't remember the actors involved, but these three main characters were all Caucasian. The main two leads were around 30, with the local man being older. The town was in the Southwest, I believe, with lots of scrub-brush and semi-desert areas around the town.

Could it be The Return?

That would be The Return. 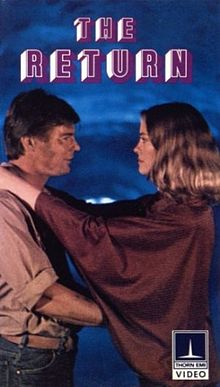 The Return was made in 1980 and is a Science Fiction Horror Film featuring Raymond Burr, Martin Landau, Vincent Schiavelli, Jan-Michael Vincent, and Cybill Shepherd.

Twenty five years after two children and a prospector see a UFO descend upon their sleepy New Mexico town, a series of cattle mutilations have occurred and all three find themselves being brought back together to discover what happens when the UFO returns.

4
70s or 80s horror movie, guy is cutting people up and throwing them in a portal to a monster?

9
1980s film involving humanoid aliens crash-landed on Earth
11
I'm looking for the title of a sci fi film about a killer robot
7
Looking for the title of a gold heist movie involving the telekinetic son of an extraterrestrial/alien?
6
Looking for a title to a 80s sci fi film
7
Looking for 80s sci-fi movie, Aliens who fuse, Robotic Band Members
9
Book about an astronaut who is tasked with investigating the disappearance of a shuttle in the vicinity of a small forest planet
13
Looking For Title of Circa 1990s English-Language Sci-Fi Film