Why didn't Neo have a hole in his belly?

After the Agents inserted a tracking bug into Neo and he wakes in his room, he is immediately contacted by Morpheus again and meets with the redpills. Before taking him to see Morpheus, they demand that he pull up his shirt... after which Trinity

attaches a large device to his torso that tracks and RIPS OUT the tracking bug, apparently through his belly button.

However, despite the claws of the device OR the violent removal, Neo has no visible wounds afterwards. Now, the Agents may have the ability to heal any visible wounds (since they can manipulate the Matrix code), but the redpills wouldn't have this ability. Plus, there appears to be quite a bit of blood & gore that comes out with the bug:

Why are there no holes in Neo at this point?

Note: Question inspired by an answer to Was Neo dreaming when Agent Smith interrogated him, his mouth disappeared, and a robotic insect crawled into his belly button?

The bug removal device doesn't appear to penetrate Neo's skin, so there's no reason to expect a wound from the "claws": 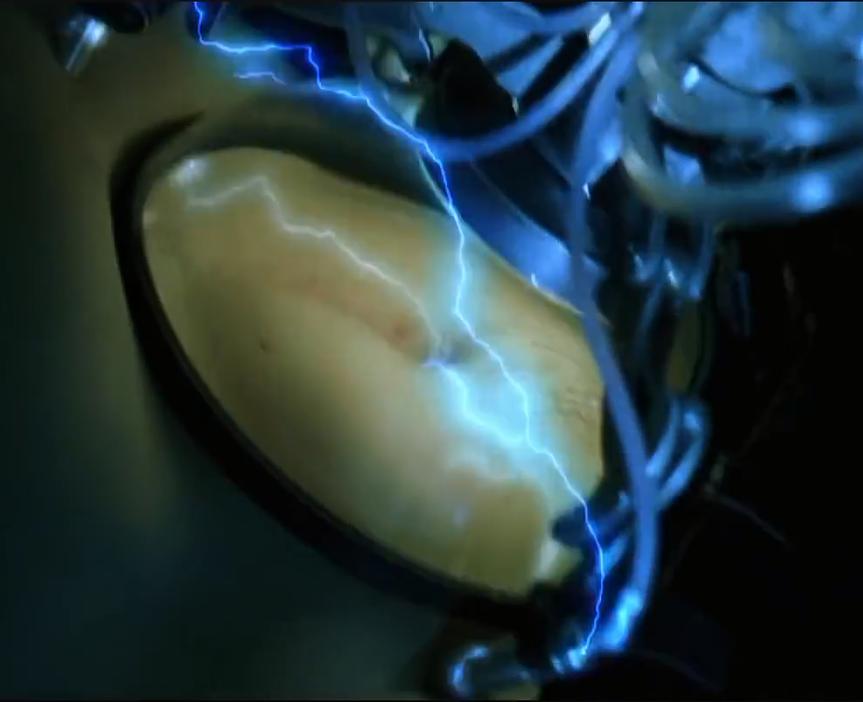 Some redness on the skin might be expected, but not much else.

The "violent removal" of the bug through his navel is more difficult to explain, but it turns out that it's possible in the real world (our real world, not the one in The Matrix) to do surgery through a person's navel -- this is called a laparoscopy. According to the U.S. National Library of Medicine, the surgery is a fairly minor outpatient procedure:

Afterward, the incisions may be sore. Your doctor may prescribe a pain reliever.

You will recover for a few hours at the hospital before going home. You will probably not stay overnight after a laparoscopy.

Another source describes the procedure itself a bit:

The typical pelvic laparoscopy involves a small (1/2" to 3/4") incision in the belly button or lower abdomen.

...a laparoscope (a one-half inch fiber-optic rod with a light source and video camera) is inserted through the belly button. The video camera permits the surgeon to see inside the abdominal area on video monitors located in the operating room.

The size of the incision is on par with the bug that was removed from Neo, so the procedures are comparable. In real life the surgery is performed with general or local anesthesia, but it's possible (albeit very painful) to remove the bug without anesthesia.

You've noted that there's some blood and gore when the bug was removed, but in a real laparoscopy there's not much more blood than that. This video (WARNING: graphic) shows a laparoscopy done on a patient under local anesthesia and there doesn't appear to be much bleeding even when the laparoscope is removed:

The bug removal device probably vacuumed up most of the blood from Neo's navel and, since we don't know much about the device, it's possible that it can apply a clotting agent to the wound to further prevent bleeding (or, if nothing else, Trinity could have applied a clotting agent and/or bandage shortly after she finished removing the bug). We don't see Neo's abdomen after the bug is removed except immediately after (and even then it's not a great view), so we don't know much about how the wound was cared for. Neo might have also been given a painkiller off-camera.

Since it's possible in real life to perform a similar procedure without much blood and gore, and we don't get a good view of the wound and its care, it's within the realm of possibility that Neo's wound was too simply minor to notice. It's not even necessary for either the bug or the removal device to have special properties within the Matrix simulation to explain the minor wound.

Wound inside the Matrix

Partway through the interrogation in which the device was inserted into Neo, it appears that the Agents sedated him and then returned him home to his bed. As a result, Neo believed it was all a dream, and was very surprised to learn that the device is "real":

Working off the idea that the Agents do not want their activities to be known (or else why make it seem like a dream?), the device is probably designed at Matrix-code level to exit the body after it has served its purpose, without leaving an exit wound as evidence.

Wound outside the Matrix

As for what happens to his physical body, this is probably just a matter of timing combined with attentiveness on the part of the machines. As we know, injuries suffered in the Matrix can manifest themselves in the real world, but Neo was still plugged into the Matrix at the bioelectric harvesting fields for probably an hour or so after the device was ripped out of his digital projection. Given the advanced level of medical technology possessed by the machines in order to maintain the fields, they likely recorded something wrong with his body and repaired any damage to his tissue and skin in that period of time, before he was literally washed out of the Matrix. (Repairing injuries in physical bodies caused by mishaps suffered within the Matrix seems like good practice, so as to maintain the quality of the crop.)

If you watch closely as he is sliding through the pipe between 1:48 and 2:00 in the following clip,

there appears to be no wound or bleeding in his abdominal area. This provides evidence for the machines being the ones to repair any injuries to him before he was rescued by the crew of the Nebuchadnezzer.

I think the simplest answer is "Trinity gave him a band-aid" (off camera).

No, seriously. The bug is ejected through his belly-button and in the subsequent scene (when he gets ejected from the Matrix) we don't get to see whether he's carrying a wound or not.

The next time we see him inside the Matrix, he's operating under a pirated signal using a brand new body (shell), complete with new hairstyle and fancy clothes. Any previous wounds he'd incurred in his old life would have been erased when he jacked back in (in the same way that his hand wound from Reloaded disappeared after he came out of (and then returned to) the Matrix).

8
Was Neo dreaming when Agent Smith interrogated him, his mouth disappeared, and a robotic insect crawled into his belly button?

34
Why didn't Agent Smith kill Neo before he met Morpheus and Trinity?
18
Why did the agents have to physically capture Neo?
24
Why Did Neo Think His Powers Would Work Outside the Matrix?
9
Was the tracking bug actually inserted into Neos body, or was it a program?
5
Why didn't Neo use an operator to transport him?
64
Why didn't the machine kill Neo after he was ejected?
8
Was Neo dreaming when Agent Smith interrogated him, his mouth disappeared, and a robotic insect crawled into his belly button?
7
When does Neo understand his choice?
14
Does Neo have any back-story?
59
Why did Neo even have to fight?