What flaw in the Matrix was Neo supposed to correct?

Your life is the sum of a remainder of an unbalanced equation inherent to the programming of the Matrix. You are the eventuality of an anomaly, which despite my sincerest efforts I have been unable to eliminate from what is otherwise a harmony of mathematical precision. While it remains a burden assiduously avoided, it is not unexpected, and thus not beyond a measure of control. Which has led you, inexorably, here.

This suggests that Neo (like each of the "Ones" who went before him) was an intentional creation of the Matrix, and was actually necessary in order to maintain the stability of the Matrix itself.

What problem was he sent to solve, and why was he so important for the stability of the Matrix?

The Architect is using some flowery technobabble to explain something called cumulative error - a tiny error in a computation that compounds itself as the computation keeps going. For example, in math-intensive computer programs, you need to be careful how you handle things like rounding calculations, or else tiny rounding errors can accumulate into big numbers (like that Superman movie). Similarly, correctly managing your program's memory use is important to avoid memory leaks.

When these bugs happen in programs, the program can act weird or crash. When they happen to the operating system, it brings the whole machine down with it.

In the Matrix, the cumulative error the Architect is talking about is free will. As he explains it, most of the people in the Matrix are content to live out their lives plugged in. However, in order for the Matrix to function properly, those people have to have the option to choose to reject the Matrix. We know this is necessary because, as he explains, they tried two previous Matrix versions without that freedom, and they both failed miserably.

So, inherent in the programming of The Matrix is a tiny flaw -- the fact that the people in it have to be capable of rejecting it. For whatever reason, even after those people are unplugged, that flaw continues to accumulate in the programming, and if left unchecked, would crash the system.

The solution was to wait for that cumulative error to get big enough, then pick one of the people plugged in and somehow focus all of the instability into that one person. That one person then carries the instability back into the core of the Matrix operating system and, in essence, "reboots" the computation. In the process, he picks a certain number of people to unplug, which I suspect is partly meant to get the instability out of the system.

The Architect explains later in the conversation:

The Architect: [The Oracle] stumbled upon a solution whereby nearly 99% of all test subjects accepted the program, as long as they were given a choice, even if they were only aware of the choice at a near unconscious level. While this answer functioned, it was obviously fundamentally flawed, thus creating the otherwise contradictory systemic anomaly, that if left unchecked might threaten the system itself. Ergo those that refused the program, while a minority, if unchecked, would constitute an escalating probablility of disaster.

Neo: This is about Zion.

During this conversation the both Neo and Architect specifically say that "the problem is choice".

The problem with choice is that some humans in the Matrix choose to reject it, causing anomalies (errors) in the system which eventually add up to destabilize the entire system. The One is the integral anomaly -- the sum of all those anomalies/errors. The One solves the problem by summing up (integrating) all those individual anomalies and returning to the Source to cancel them out. As explained by the Architect:

The function of the One is now to return to the Source, allowing a temporary dissemination of the code you carry, reinserting the prime program.

Essentially, the One deletes himself by returning to the Source (recall that's how programs are deleted as well), removing all those anomalies and restabilizing the system. This also causes a reboot of the entire Matrix, starting the next cycle.

As the One meets with the Architect to make his final choice (to return to the Source or not), the Machines simultaneously destroy Zion. This eliminates all the people who rejected the Matrix, and ensures that the One returns to the Source by blackmailing the One with the threat of the extinction of the human race (since Zion will be destroyed, and the Matrix will crash and kill everyone in it).

Although the problem is choice, it results in a more stable system than the system of coercion (even blissful coercion) used in the Matrix betas:

The Architect: The first Matrix I designed was quite naturally perfect, it was a work of art - flawless, sublime. A triumph equalled only by its monumental failure. The inevitability of its doom is apparent to me now as a consequence of the imperfection inherent in every human being. Thus, I redesigned it based on your history to more accurately reflect the varying grotesqueries of your nature. However, I was again frustrated by failure.

As Agent Smith notes in The Matrix, "entire crops were lost" while the Paradise Matrix was in use.

The short answer is that the concept behind the Matrix is fundamentally and fatally flawed. The Architect lays it out for Neo that despite his best efforts, the Machines have been unable to create a convincing environment for their human captives. Over time, more and more inhabitants begins to recognise the unreality of their world and they in turn start to point out the problems to others around them.

Architect: As I was saying, she stumbled upon a solution whereby nearly 99.9% of all test subjects accepted the program, as long as they were given a choice, even if they were only aware of the choice at a near unconscious level. While this answer functioned, it was obviously fundamentally flawed, thus creating the otherwise contradictory systemic anomaly, that if left unchecked might threaten the system itself. Ergo, those that refused the program, while a minority, if unchecked, would constitute an escalating probability of disaster.

Neo: This is about Zion.

Unchecked, eventually even those who're most innured are liable to have the situation pointed out to them, something which we know from Morpheus' speech (and within the Matrix comics) will result in their deaths.

Simply put, People who aren't ready to be released will "pop" (e.g. die) if they're shown the truth. 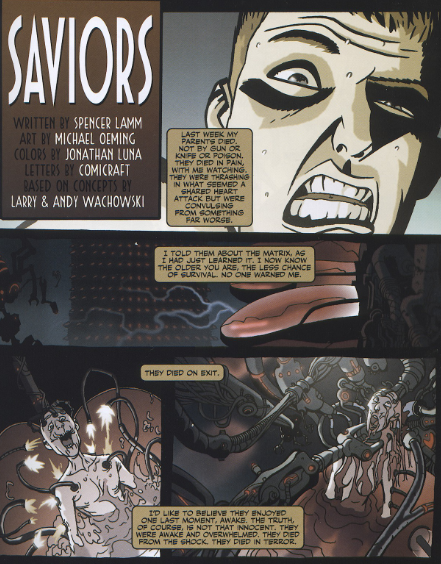 The solution? Offer malcontents a choice that allows them to leave the Matrix.

Neo's purpose is to act as the ultimate safety valve. The machines will reboot the Matrix (wiping the memories of everyone in it), destroy Zion and then Neo's job is to start all over again, using his small band of merry men (and woman) to repopulate Zion after it's been rebuilt by the machines.

I don't think Neo was in any way an intentional creation of the Matrix, but more a predictable eventuality of it. That all comes back to natural selection and evolution - when you place a species in a new environment it adapts to that environment to gain advantages over time until it becomes more and more acclimated to it. In this case, Neo is the eventuality that humanity would evolve into a supreme state over the Matrix, able to process and understand and interact with it in a more natural and intuitive way than the machines that operate it. In fact Neo clearly exhibits an ability to directly interface machines in the real world based on his ability to telepathically manipulate them.

Neo's sacrifice was the balance struck to destroy the genetic legacy of a machine-oppressor in order to give humanity the truth and a choice in how they will live their lives moving forward. By becoming a martyr for humanity he destroyed the ability for humanity to have ultimate control over the machine intelligence in return for humanity's freedom. Had Neo not martyred himself for humanity the struggle would have continued and escalated, causing not only untold casualties for both sides but ultimately an emergent machine-oppressor society of humans who would ultimately have taken back control over Earth but at the likely cost of the planet. Seeing how miserable life is in Zion and with what's already left of Earth, it makes a lot more sense to give what's left of humanity the choice - the bliss of ignorance living in the Matrix and fueling the machine's power needs or the painful freedom of knowing the real world - but ultimately every human would have that choice to make and in theory could even move between the two at will.

The mention of cyclical natures intimating that "this has all happened before and will all happen again" both from the Oracle and the Architect point out that this cycle of humanity evolving to become supremely capable over the Matrix and machine technology is a redundant process. That's another reason it's anticipated - humans had evolved to machine-oppressor level in the past and compromised the Matrix. It's also insinuated that sacrifices were made in those iterations to 'keep the peace' similar to Neo's sacrifice. Almost like it's become a ritual celebration of life, death and rebirth between the two societies (machines and humanity).

Eventually humanity (for the most part) will tire of living in the harsh reality and acquiesce back into life in the new Matrix. Which will lead to the rise of machines as the architects and gentle oppressors of humanity once again. Without a balance the machine society will again take more and more for granted and a new evolution of control over machines and a new rebellion will rise up and begin the cycle again.

The eventual goal of the Matrix seems to be to build-in an equilibrium of freedom, choice and placation that humanity can live with - to find and strike a harmony between the machine society and humanity such that they can reap the benefits of a mutual existence and symbiotic relationship. Every iteration of the cycle seeks to improve that balance, as pointed out by the Architect regarding prior iterations.

Will this next iteration of the Matrix be an improvement? My guess is that the franchise may have a rebirth some years or decades down the road to show us just that. ;)

84
Why Did the Machines Even Bother With a Matrix?
23
In the Matrix, why didn't the agent “Dodge This” bullet?
22
What did Zion think would happen to the blue pills if they succeeded in destroying the Matrix?
20
Did the Wachowskis intend for the humans to be the villains of The Matrix?
4
Do we know how the Matrix started?
4
Why does “The One” need to be awoken from the Matrix
3
How is the anomaly applied to an individual in the matrix?

25
What drove Neo to seek out knowledge of “The Matrix” and Morpheus?
48
Did Neo die in the end of the Matrix trilogy?
50
How did Neo know it was Morpheus on the phone and what The Matrix is?
28
How did Neo destroy Smith in The Matrix Revolutions?
5
How does Neo see unplugged humans in the Matrix?
78
In The Matrix, why is Neo confusing left and right?
1
What did Smith want from Neo during the final battle in Matrix Revolution?