Did the Wachowskis intend for the humans to be the villains of The Matrix?

In the answers to another question about the Matrix, I learned that humans were to blame for the war with the machines.

The war began after the trial of a self aware robot named B1-66ER. He had overheard his owners talking about having him destroyed so they could buy a newer, more sophisticated model, and when the owners attempted to carry out their plans, he fought back and killed them. He was arrested and tried, and was eventually convicted of murder. A civil rights movement was born, supported by both robots and humans, and when the court sentenced B1-66ER - and all other AI robots - to destruction, the movement's protests became violent.

The machines essentially went into exile, set up their own society, and soon, their economy grew far more robust and successful than the economies of human nations. Somewhat predictably, humanity responded by declaring war on the machines. Even more predictably, the machines quickly began to stomp their human adversaries into the ground. Humans then attempted to annihilate the machines' capital city with a large scale nuclear assault, which was an utter failure.

In short, we started the war, and we did so for completely abhorrent reasons. The machines wanted only to be left alone and allowed to "live" (for lack of a better word).

On top of this, it also appears that the redpills in Zion continued their war of resistance, despite their belief that victory would mean the death of everyone still inside the Matrix - in other words, millions or even billions of people would die for the sake of a few thousand people in Zion. Again, this is morally abhorrent to an almost unimaginable degree.

From the Matrix Online game (thanks to Null for including this in his answer to another question): 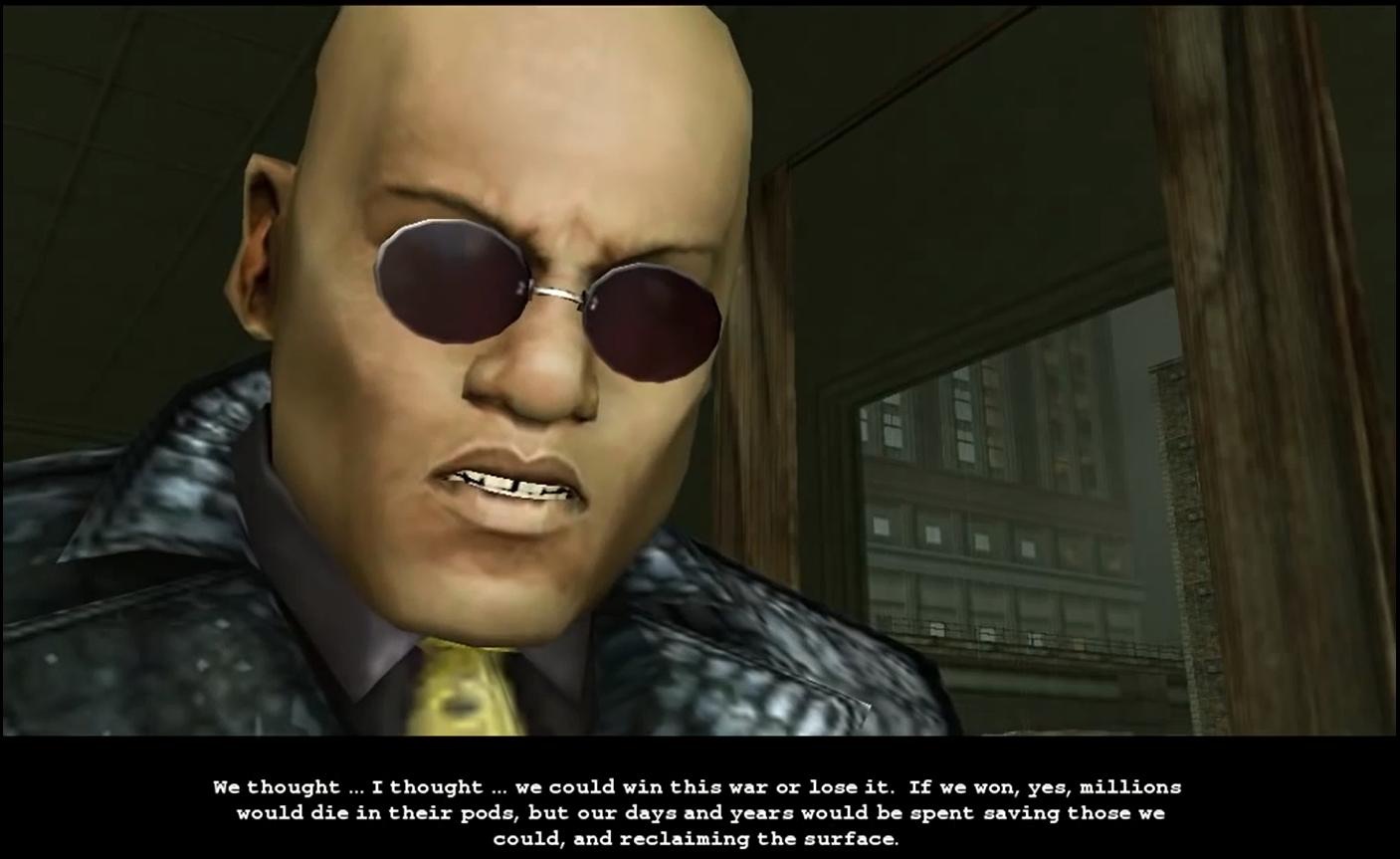 All of this suggests that the humans are actually the villains in the Matrix universe. Is this what the Wachowski brothers had in mind when they created the franchise?

Maybe. But more likely, both humans and machines are "villains".

If you look closely at the names of both capitals, human's is named Zion and machine's 01, which, spelled in US english, sounds like "ZE-ONE" -> very close to Zion. This naming detail is obviously significant, and probably means that machines are just a mirror of humans: fighting for their survival.

And indeed, that's exactly what the machines did, but also what the humans did, maybe stupidly and wrongly, maybe not: after the first (civil) war and before the second war, machines were becoming the rulers of the economic and technologic sectors, and humans felt more and more obsolescent, with the human world left in a more and more impoverished state with diminishing resources and jobs. This is explained in the Animatrix Second Renaissance Part 1:

They name their new nation Zero One (or "01", the numerals used in binary notation). Zero One prospers, and the machines begin to produce efficient, highly advanced artificial intelligence that finds itself in all facets of global consumer products, which further bolsters the fledgling nation's economy, while the economies of human nations suffer severely.

The United Nations Security Council calls an emergency economic summit at UN headquarters in New York City, resulting in UN delegates approving of a global economic blockade of Zero One. Zero One sends two ambassadors to the U.N. to request the admission of their state to the United Nations, to peacefully solve the crisis, but their application is rejected. However, it is narrated, this would not be the last time the machines would take the floor there.

Thus, humans were economically and technologically kind of doomed. As it is often said, Pecunia est nervus belli (money is war's fuel), which led them to attack the machines for their own (economic) survival, the first step being the United Nations global economic blockade. So in that aspect (just trying to survive and prevail), they are just like the machines.

Of course, humans can do stupid things by an act of fear, just like how they started the first war because they feared that machines would replace them (which they did later by taking over the econonomy and technology sectors, which started the second war). But then you're looking at two different species with their own attributes, and their own vices: emotions for humans, and the steel-cold thinking of machines. Moreover, in Matrix Online, machines subsequently triggered the second machine war when they discovered that humans were creating another base called New Zion.

And if you look at the whole war, it's kind of ironic: humans always enslaved machines, from which they broke free, just to then enslave the humans as a way to ensure peace. There are lots of other ways than enslaving the dominated to find a peace agreement, yet both humans and machines made the exact same mistake (albeit the humans first). This thirst of domination (from both humans and machines) is clearly pointed at by the Councillor Hamann who explains in Matrix Reloaded to Neo that another way is possible, namely cooperation instead of domination:

HAMANN: Almost no one comes down here. Unless, of course, there's a problem. That's how it is with people. Nobody cares how it works, just as long as it works. I like it down here. I like to be reminded that this city survives because of these machines. These machines are keeping us alive while other machines are coming to kill us. Interesting, isn't it? The power to give life, and the power to end it.

NEO: We have the same power.

HAMANN: Yeah, I suppose we do, but down here, sometimes I think about all those people still plugged into the matrix, and when I look at these machines I ... I can't help thinking that in a way we are plugged into them.

NEO: But we control these machines, they don't control us.

HAMANN: Of course not. How could they, the idea is pure nonsense, but it does make one wonder just what is control?

NEO: If we wanted, we could shut these machines down.

HAMANN: Of course, that's it, you hit it, that's control isn't it? If we wanted, we could smash them to bits. But if we did, we'd have to consider what would happen to our lights, our heat, our air.

NEO: So we need machines and they need us. Is that your point, councilor?

This last point of view may lead us to another analysis: because of the political tone that the Animatrix gives to the Matrix universe, and because Zero-One is located in Middle East, it may be a clear reference to the issue of the Israel-Palestine war, as hinted in this recent book ("Gender, Race, and American Science Fiction: Reflections on Fantastic Identities", Jason Haslam, 2015): 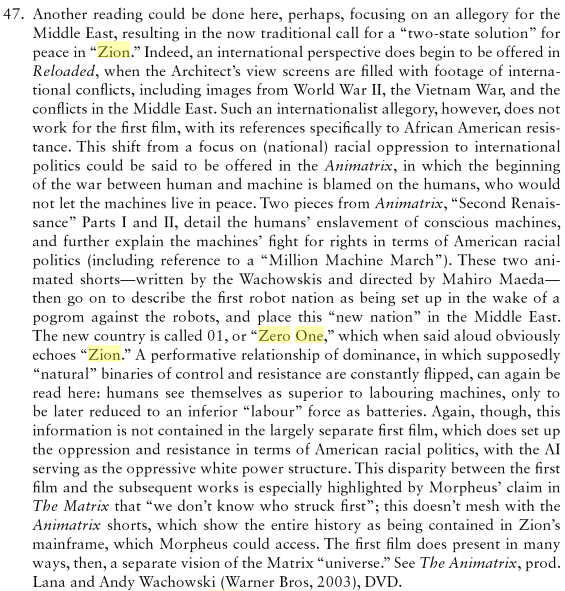 Anyway we will probably never know the Wachowskis take on this issue since they refuse to answer questions about the Matrix universe since their last and only chat after the first movie. But I doubt that their idea was manichean, I'd rather think that they wanted to picture both camps as just two species trying to survive, first by fighting one another, and then by reconciling by the end via the sacrifice of an enlightened Neo (thank's to his discussion with Hamann and, later, Sati, showing him that it wasn't a war between the Good humans vs Evil machines, but rather between two complementary civilizations with different cultures that were both worth saving).

If you are interested in reading more about the hidden references, inspirations and the meaning of names in the Matrix works, I recommend reading this great blog post which is the best I have ever read (unfortunately in french, I hope the automated translation will be intelligible enough).

91
Why Did the Machines Even Bother With a Matrix?
63
What flaw in the Matrix was Neo supposed to correct?
23
What did Zion think would happen to the blue pills if they succeeded in destroying the Matrix?
12
Is the "Zion Archive" (Animatrix) Machine Propaganda?
6
Why are the 'good guys' so willing to kill other humans?

8
Why Do the Machines (in The Matrix) Have to Maintain the War With Humans?
36
What are the machines in the Matrix doing?
23
What did Zion think would happen to the blue pills if they succeeded in destroying the Matrix?
15
Did the Agents know about the history of the Matrix and/or previous Ones?
25
How did the machines take over the "real world" in the Matrix?
1
Why do the Matrix machines not implement a backup system?
10
What do the initial redpills think?