What happened to Captain Kirk's body?

At the end of Star Trek: Generations, Captain Picard constructs a makeshift grave out of stones for Captain Kirk, who died helping Picard to stop Dr. Tolian Soran from destroying the Veridian system. 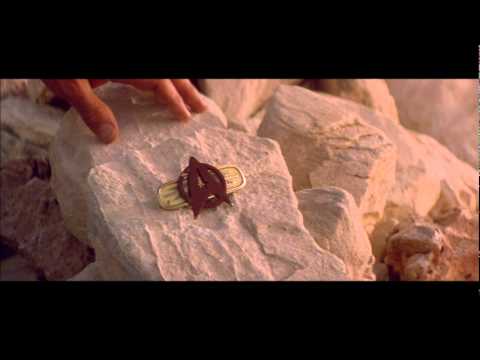 Was the burial only symbolic, or did Picard arrange for one of the starships picking up the Enterprise D crew from Veridian III to also retrieve Kirk's body?

Kirk was a Starfleet legend, and so a burial on Earth — with Starfleet brass and Federation dignitaries present — might have been in order.

Did this happen, or was Kirk's body simply left on Veridian III?

Since there is nothing further in the films or any of the television series about this (at least not that I can recall), any relevant information from the extended universe is welcome.

From Memory Beta, we find there are multiple timelines where different things happen:

According to the original Generations timeline, it seems there is no future reference to what happened to Kirk:

Picard buried Kirk using a pile of rocks, leaving Kirk's Starfleet insignia on one of the rocks as the only indication as to who was buried there. (TNG movie, novelization & comic adaptation: Star Trek: Generations)

However, outside of canon, there is a disturbance to the timeline, but it is corrected and restored to what happens above. Kirk's story doesn't end there though (outside of canon of course) in The Return:

One month after the events on Veridian III in 2371, Starfleet Intelligence extracted Ambassador Spock from Romulus to serve as part of an honor guard transporting Kirk's body back to Earth.

So, there was the intention to give Kirk the ceremony he deserved. I won't spoil what happens, but there is a disturbance to that plan.

Following the events of The Return, we don't actually know what happens to Kirk's body! But I can answer your question insofar as there was at least the intention to give him the ceremony (and he was given a ceremony at the end of The Return, but he wasn't dead)!

Canon evidence is non-existent, so we cannot say for sure, but it seems like his body was left on Veridian III. I am not familiar with many non canon references, but I can do some research and let you know.

EDIT: In the novel the Return, they attempt to bring Kirk back to earth, but they are intercepted by a Romulan Warbird, and his remains are beamed on board, you can look up the novel or read it to see what happens next.

In the comics, Spock arranged for a very discreet transport to Veridian III and took Kirk's body back to his family's farm in Iowa where he is buried, headstone and all.

Not the answer you're looking for? Browse other questions tagged star-trek star-trek-eu star-trek-generations or ask your own question.

12
Why was there no funeral for Kirk at the end of Star Trek: Generations?