What are the forces external to Yahweh in Mike Carey's Lucifer?

In the final issue of Lucifer (#75), Yahweh mentions forces external to himself.

Yahweh: You cannot be your own maker Samael, none of us can 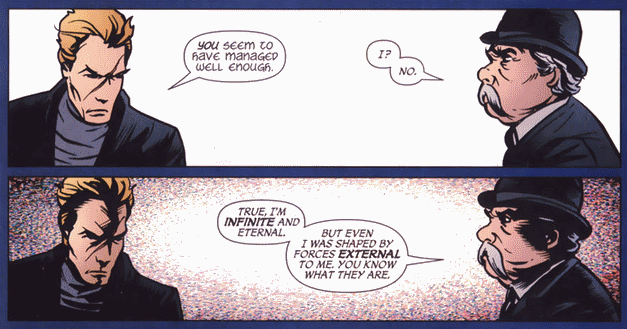 What is the writer intending for Yahweh to convey here?

Though a spinoff from Neil Gaiman's "Sandman", the Lucifer series was written by Mike Carey. He conflicts with the Gaiman-canon in a few places and also worked extensively on Hellblazer around the same time. Perhaps an in-story explanation of "you know what they are" can be found in the greater DC canon, the Sandman canon alone, or perhaps Carey is just making a point about self-determination?

Given the nature of the Sandman comics it could be interpreted in two ways, both can be equally valid. 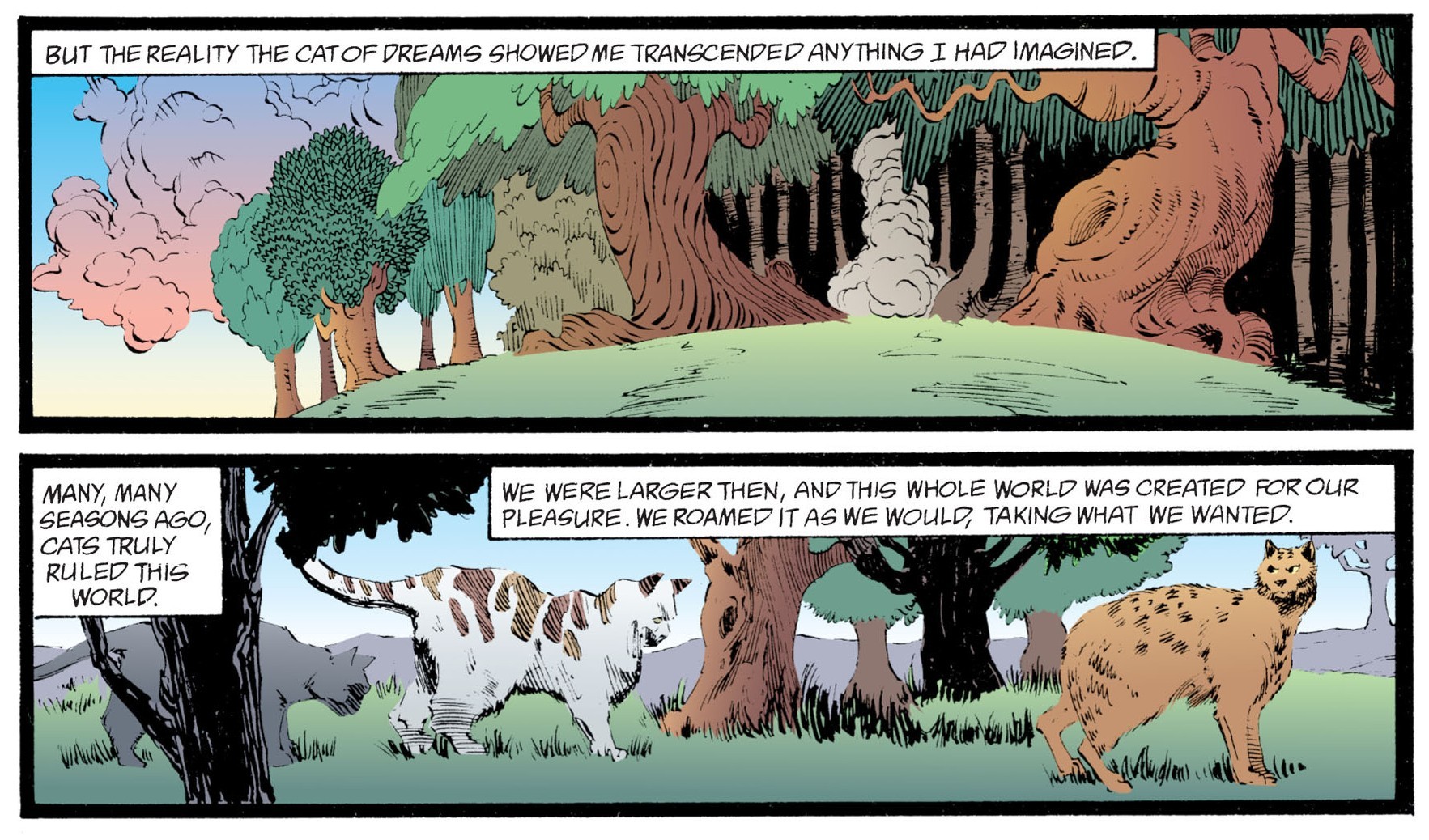 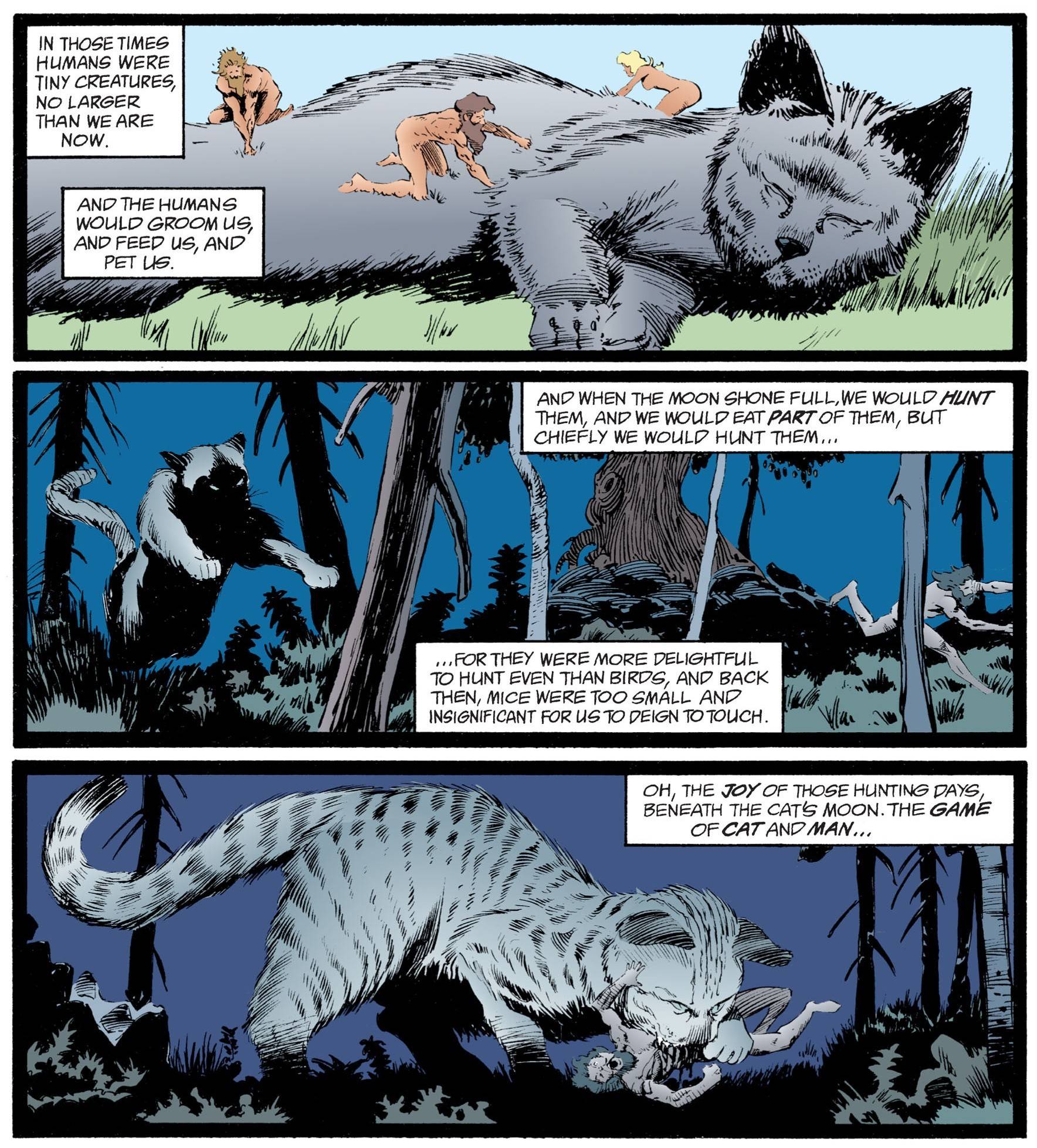 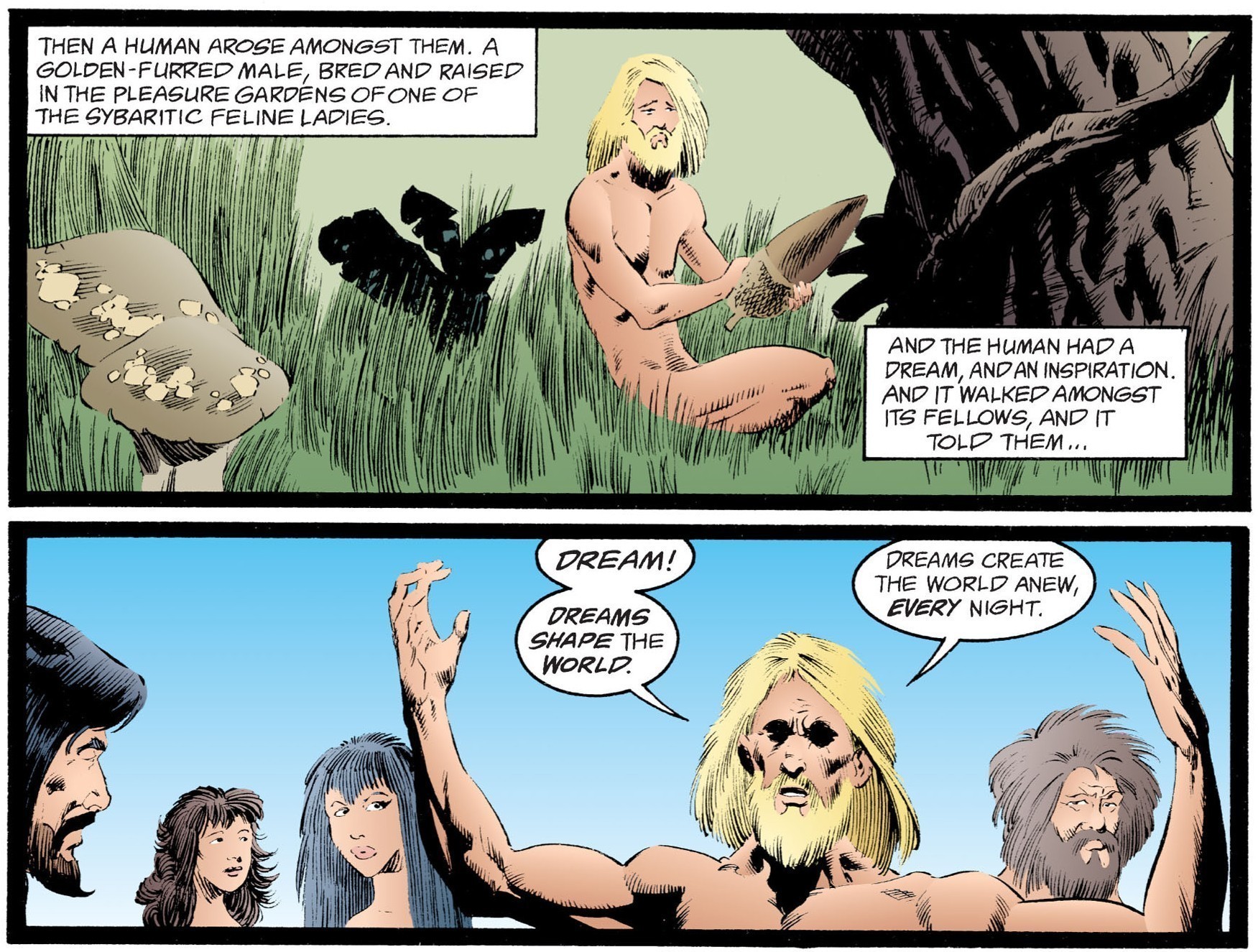 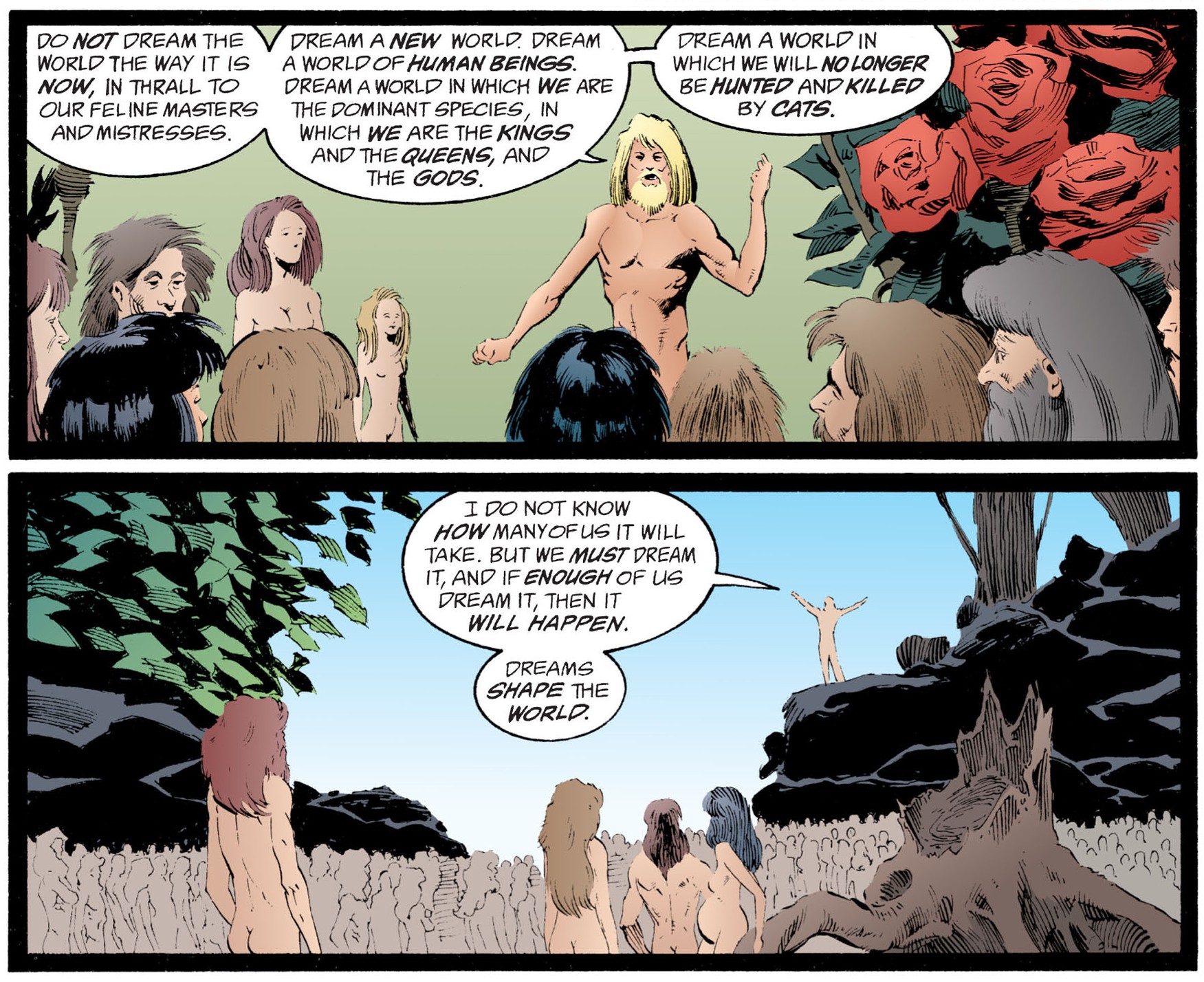 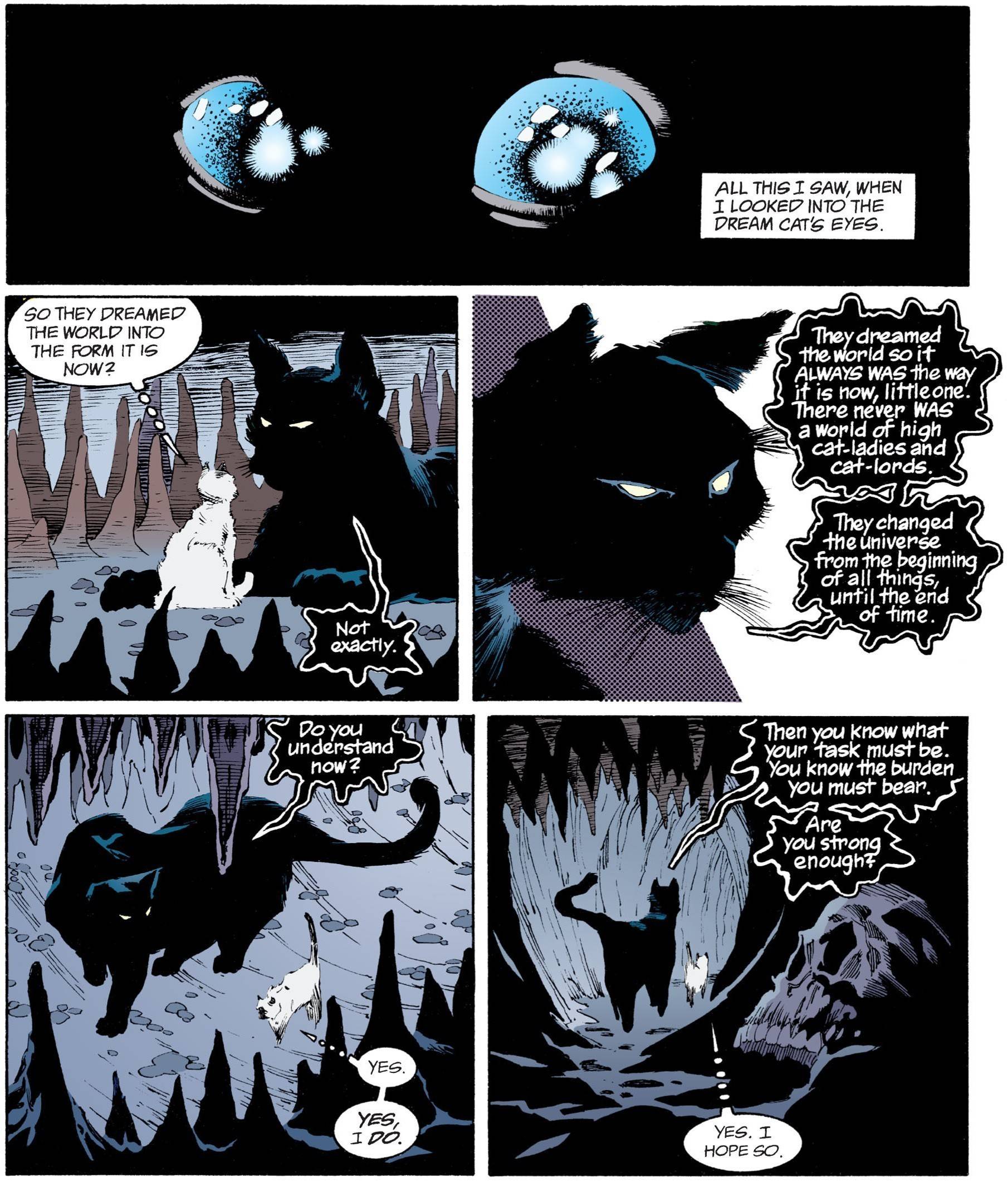 Is the Dream of Cats lying? Who can say but the consensus was, the Dreaming Cat who sought retribution and change for the loss of her kittens was driven to convince cats everywhere they could have the reality they lost back, if they believed.

But as one old Tom, relayed to a kitten he brought to the storytelling, who could convince a thousand cats to do anything...

If this tale is NOT merely an allegory, then the Presence is implying the Universe is ultimately mallable by a will greater than His. The power of the dreams of a determined group...

Mike Carey has answered this question on his Twitter, if you accept that as a valid source:

@aterial_dawn Ie the minds of sentient beings across the universe. We make our gods for ourselves, in our own image.

He also responded to this question again on January 6, 2016 saying:

"I had in mind the beliefs and imaginations of humankind. See "Dream Of a Thousand Cats" in Sandman..."

24
How was Delight changed to Delirium?
7
What is the origin of non-christian deites and realities in Lucifer?

5
How did Mazikeen end up with Lucifer at the "Lux"?
8
Has the "Hellblazer" Constantine ever met Lucifer?
9
Is Sandman ever mentioned in the Lucifer TV series?
7
Is the Vertigo (especially post-"Lucifer") continuity now completely separated from DC comics?
8
What is the out-of-universe reason Lucifer Morningstar's new bar called "Ex Lux"?
2
What are the limits of Jesse Custer's power?
4
Why is the Presence different in the newest Lucifer comic series?
7
What is the origin of non-christian deites and realities in Lucifer?