What was the name of the tv show about a guy who lives in a town with aliens disguised as humans?

I watched it a while ago and I can't remember the name of this show. A guy -- who is a detective I think -- lives in a smallish town where aliens have disguised themselves as humans and he is the only one that knows this.

To narrow it down: there was an episode where three girls were being put on trial as witches and one of the girls saw through the alien disguise and confused the alien for a demon.

Does anyone know what show I'm talking about?

The show was First Wave.

Former thief turned security specialist Kincaid Lawrence "Cade" Foster’s life was idyllic, with a beautiful wife, good job and a nice house. Unbeknownst to him, a race of extraterrestrials called the Gua have identified him as subject 117 in an experiment to test human resilience. As part of this experiment, his life is systematically ruined, including the murder of his wife, for which he is framed. He is the only one of the 117 subjects to solve the riddles of the experiment and escape arrest to live as a fugitive. The Gua are among humans in the form of hybridised genetic clones and plan to enslave humanity—the first of three “waves” intent on conquering and finally destroying the human race. Constantly pursued by the police, and a strange government agency called the Illuminati, Foster discovers previously unknown quatrains of Nostradamus, which tell of three waves that will destroy the planet unless the “twice-blessed man” can stop them. For this reason, Foster investigates strange occurrences that may have ties to the Nostradamus quatrains, hoping to find what he needs to stop the Gua.

The episode with the witches was Season 1 Episode 8, "Book of Shadows"

Cade and Eddie travel to Salem, Oregon, where high school student Diana Black stands accused of killing three high-ranking members of the community. Diana's defense is that she is a witch and the three victims were not human but demons. Cade and Eddie realize that Diana has somehow found a way to identify the Gua. Diana tells Cade that she learned everything from an old book called "The Book of Shadows". Cade finds the book in the police department's evidence room, but the pages that tell how to identify the "demons" are missing. Realizing that the Gua will do anything to keep their secret, Cade realizes that he must find a way to save Diana and recover the missing pages before the Gua can destroy them.

It doesn't entirely match, but is it possible that you're thinking of "Syzygy", an episode of The X-Files? It involves two girls with an interest in witchcraft, a witchhunt, and them eventually being held at a police station by Mulder until their power passes. 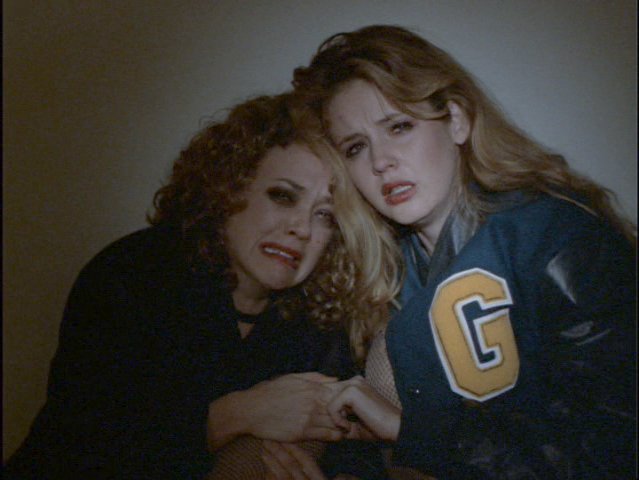 It does not match in that it's two girls, and I don't think they were so much "arrested" as "detained by a federal agent then let go".

Could it be the old 1960s tv show The Invaders?

David Vincent, an architect returning home after a hard, hard, day parks his car in an old ghost town in order to rest for a while before continuing on home. Suddenly, in the middle of the night, something wakes him: a strange object, nonhuman, that is landing in front of his eyes. From this moment he will be trying to persuade a skeptical world that the invasion of our planet is going on, that the nightmare has begun...

Not the answer you're looking for? Browse other questions tagged story-identification aliens tv magic witches or ask your own question.

13
What TV show or movie features pods landing in water and people swimming to shore?
5
Where do the Aliens come from?
2
What dark anime show had a character with organic armour who fought for good?
3
Movie about a young boy with an alien father coming to find him
11
need help finding the name of a book about psychic powers, aliens, and brain in a vat type plot
6
1990s (?) Animated sci-fi cartoon. Search for Indiana Jones lookalike
30
Looking for a short story about a man at a bar who thinks aliens are hiding at the edge of vision
20
Old scifi movie where aliens disguise as humans
10
Movie in which aliens disguise one of them as a cartoon chicken, mistakingly thinking it will help him blend on Earth
8
Movie: astronauts visit a Mars-like planet with aliens passing as humans, alien embarks the ship, which destructs before landing on Earth