This was a book that I read in 1985-1986. I vaguely recall that there was a hand wearing a ring on the cover and that it seemed to be a newer book from the library.

The story took place in the future and the Earth was dying. People weren't allowed to cut any grass or destroy any type of plants. The main character was a boy who lived with his father. They grew food and vegetables secretly and had a hidden room behind their refrigerator I believe. People were disappearing and I think the boy's mother had disappeared. The government spied on people and searched homes randomly. The boy's father eventually disappeared also and he became friends with a teenage girl whose parents had also disappeared. I remember that she had a gas powered car and that she and the boy somehow discovered clues relating to the disappearances. The boy and girl eventually solved the clues leading them to find their families. I think the missing people were put to sleep till the planet healed. Any suggestions would be greatly appreciated as I would love to re read a piece of my childhood.

This is Frank Bonham's The Missing Person's League, first published in 1976: 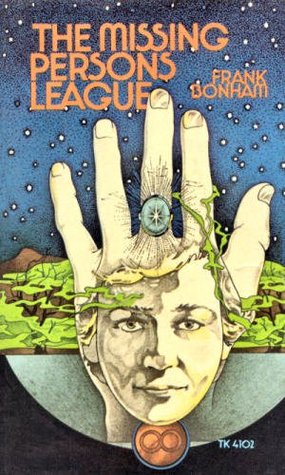 It hits all of your major points: dying earth; secret garden in house; invasive home searches; disappearing people; and

FYI, this is also a repeat of this answered question, though yours better describes the salient points.

16
What novel was set in a dystopian future and featured a boy searching for his missing father?
4
Looking for young adult book about boy who wishes to be a farmer/gardener

16
What novel was set in a dystopian future and featured a boy searching for his missing father?
17
SF Short Story Identification: Boy finds a cube, people disappear, and boy becomes cube?
7
Novel in which an alien ship crashes & the teen survivor helps thwart an alien invasion
3
YA book about a ghost boy and the attempt to put him to rest
7
Fantasy anime. Main protagonist is the son of a blacksmith
6
A fictional story about a kid who is crazy into clock work with tons of pictures
8
Story Identification for an anime movie from 2004-2005 in animax