Sci-fi comic from the 90s or 2000s; main character is a girl with white skin and black markings around her eyes

I'm trying to bring to mind this comic I read years ago. I remember the cover very clearly, at least it seems clear even if the image has been corrupted over the years.

A girl on a bike, or halftrack bike or maybe a speeder, some small open vehicle with handlebars, on snowy ground like tundra. I think it was a snow planet. It's drawn from above, like a crane shot in a movie, and she's looking up at the "camera" wearing, I think, a leather 'pilot's cap' and goggles and maybe a bomber jacket. She's meant to be some kind of near-human alien, I think, of a style I've seen pop up for several races in Star Wars comics (especially not unlike Aurra Sing): paper-white skin, with black markings.

The way I'm picturing the markings is black circles around her whole eyes, like a panda. It could also have been black stripes on her cheeks. I have separate memories of the markings and I think I'm conflating this comic with something else I read.

I'm pretty sure she was a bounty hunter, or something like that, flying around in space in her own ship. I don't really remember any story details, unfortunately– it's always the visuals that stick with me.

Zero doubt here: you're thinking of the English cover of "Gearing Up", the third volume of Wake, originally published in France in 2000 and translated in English in 2002. 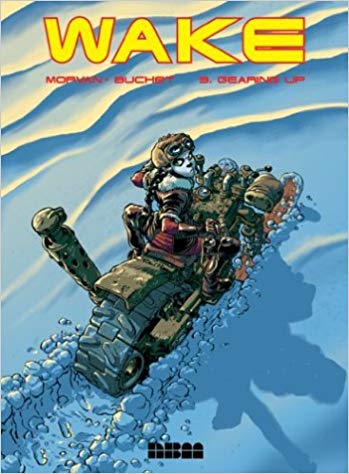 I found it because I read this series (it's absolutely excellent by the way). In some volumes, Nävis (the protagonist) has to wear a panda-like disguise, which your description reminded me of. In fact, I had the original French cover in mind, which did have Nävis dressed in leather, but no bike; I thought to check if maybe the cover got changed for foreign versions.

4
Comic book about a girl who can see monsters hidden among us
9
Looking for a sci-fi comic about a female soldier of fortune
5
Identify black and white comedy/horror comic from 90s: Students being killed on campus
7
Comic character from the 90s who resembled Spawn
7
Sinister themed comic/graphic novel containing the Book of Revelation, Apocrypha, ravens, the Four Evangelists