What is the time difference between Prince Caspian and The Dawn Treader?

So, a question was asked earlier: How much time passed between The Lion, the Witch, and the Wardrobe and Prince Caspian? And I had made a comment that was, rightly suggested, to ask as a question. Looking at the answers, it would appear that ~1300 years passed in Narnia with ~1 Earth year. So, how much time passed between Prince Caspian and The Dawn Treader? Earth time it seems to be ~1 year, whereas on Narnia, it seems to be ~1 year as well. I've seen the question How can the time variations be explained in the first three books of the 'The Chronicles of Narnia'? so I understand there is no direct ratio. I'm just curious as to the time difference in Narnia and Earth time between the two books.

The Voyage of the Dawn Treader itself spans many months, possibly a full year, but the time gap between the two books is stated explicitly right at the beginning of Chapter 2. This is shortly after Edmund, Lucy, and Eustace were rescued from the sea:

"Where is Eustace?" asked Lucy.

"In bed," said Edmund, "and I don't think we can do anything for him. It only makes him worse if you try to be nice to him."

"By Jove, we do," said Edmund. "And first, about time. It's a year ago by our time since we left you just before your coronation. How long has it been in Narnia?"

"Right. Well, on my coronation day, with Aslan's approval, I swore an oath that, if once I established peace in Narnia, I would sail east myself for a year and a day to find my father's friends or to learn of their deaths and avenge them if I could. These were their names: the Lord Revilian, the Lord Bern, the Lord Argoz, the Lord Mavramorn, the Lord Octesian, the Lord Restimar, and - oh, that other one who's so hard to remember."

it is 1 year of earth time between these 2 books, and about 3-4 years pass for Narnia. Timeline 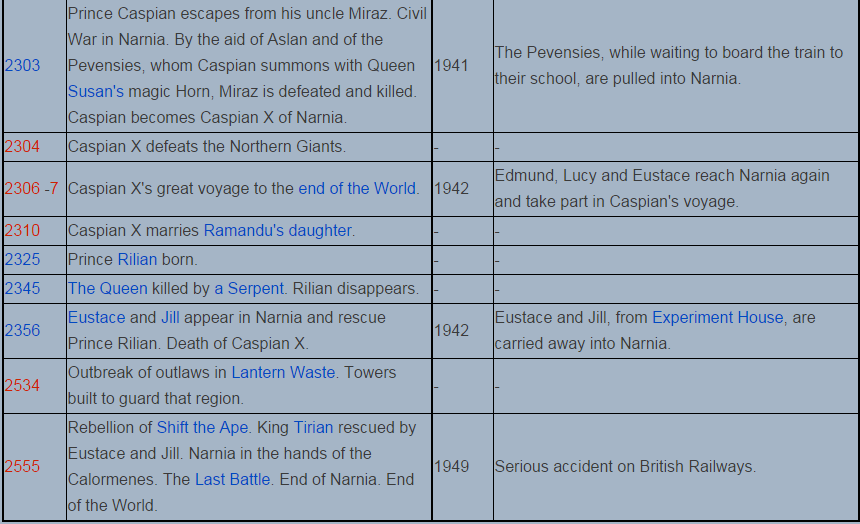 20
How can the time variations be explained in the first three books of the 'The Chronicles of Narnia'?
25
How much time passed between The Lion, the Witch, and the Wardrobe and Prince Caspian?

20
How can the time variations be explained in the first three books of the 'The Chronicles of Narnia'?
32
If Peter, Susan, Edmund and Lucy were the only humans in Narnia, how did the human population emerge?
25
How much time passed between The Lion, the Witch, and the Wardrobe and Prince Caspian?
34
Are the “wood between worlds” and Aslan's Country related in some way?
9
What happened to Father Christmas' gifts to the Pevensies?
94
Why was Susan treated so unkindly?
10
Did Aslan's army contain normal horses?
40
What does Aslan mean about being a bridge builder in our world?
205
Why did C.S. Lewis use Turkish Delight as temptation for Edmund?
11
At what point did C. S. Lewis decide that humans were a normal part of Narnia's world?