Is there a test or trial to become a padawan?

We know that Jedi are recruited at a very young age. Anakin Skywalker himself was deemed "too old" to begin training at 9 years old. We also know that younglings are assigned in groups to a Jedi Master to begin their training, as we saw in Attack of the Clones and the Clone Wars TV series (I see it as an elementary school or something. A group of students assigned to one classroom and one teacher).

Obi-Wan Kenobi began training with Qui-Gon Jinn at 12 years old. I assume that before that he was considered a youngling.

We also know that in order to become a Jedi Knight, a padawan must take "The Trials".

So my question is: Is there a similar test or "trial" for a youngling to become a padawan, or apprentice? Do they just reach certain age and are assigned a Jedi Master to train one-on-one?

Although he was initially rejected by the council, we DO see Anakin being tested by the Jedi Council in Star Wars Episode I: The Phantom Menace. This test seems to consist of not only interview questions and a psychological evaluation, but also an ESP test where he must correctly guess what is depicted on Master Windu's datapad:

Since the Council's stated reason for rejecting Anakin was his age, it's probably safe to assume that he passed the tests we see on-screen. Otherwise, it would have been easier for the Council to reject him based on that failure.

However, given that most Padawans are selected while infants, it would stand to reason that a less interactive test - such as Midi-chlorian count - is used for their initial selection and inclusion into the Order as an Initiate.

Once a child is old enough - generally as they enter their teen years - they are allowed to take the Initiate Trials for consideration as a Padawan Learner. The Initiate Trials vary from era to era, but generally test a student's knowledge of the Jedi Code, life as a Jedi, and possibly construction of their first lightsaber. If they pass the trials, they are then elevated to Padawan rank and assigned to a Jedi Master for one-on-one instruction.

This is discussed at some considerable length in the Jedi Path Manual. In short, Padawans can attempt the attract the attention of a Jedi Master by participating in a lightsaber competition. You can also ask the Temple's teachers to recommend you to a Master if you have a special talent (such as an affinity with animals or tech). 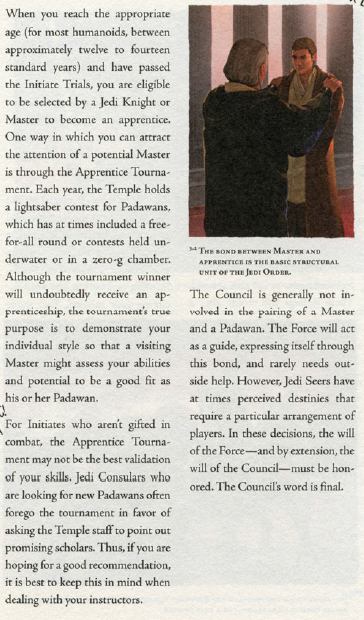 Additionally, in the Clone Wars series Ahsoka was assigned to Anakin by Yoda and the Jedi Council. There's also a mention in KOTOR of a Jedi initiation trial involving a test of your knowledge of the Force and ability to construct a working lightsaber.

67
How old should you be when you begin Jedi training?
19
Why did Qui-Gon consider Obi-Wan to not be ready for Knighthood?
55
When did Qui-Gon Jinn defy the council before?
10
When do a Jedi and a Sith become ready?
24
Has Qui-Gon ever visibly appeared as a Force ghost?
4
How many Sith can there be?
1
Which known Jedi and Padawan pairs were of the same species?