Why does Superman love Lois Lane?

In every DC Comics alternate Earth I can think of, Superman and Lois Lane are together.

Other than "because the writers said so" or "because she occupies the requisite-female-love-interest slot," I mean.

I can see why she'd be attracted to him. He's an exotic alien who just happens to be shaped exactly like a tall, athletic, well-muscled, very handsome Caucasian male of her species who also happens to be blessed with godlike powers beyond mortal men. Add that he's a genuinely good man—kind, gentle, caring, courageous, merciful to his enemies, unshakably moral, the whole bit—and throw in his status as occasional planetary savior and most famous man alive...and it's all going to be a bit much for a girl to take in. On the makes-you-feel-dangerous-but-also-safe scale, he makes Edward Cullen look like a creepy geek in the bushes with a video camera, wifebeater, and lisp.

So why does this alien god love Lois Lane? Why her—why this one woman, especially when he could quite literally have his pick of the entire planet? What is so special about her? What does he love about her? What made him fall in love with her?

It seems like it's got to be more than just that his proximity to her in his life as Clark Kent distinguished her from the rest of the women he encounters/rescues day to day.

I have a couple ideas, but I'm no expert on the material. I've seen all the movies and read a few—but not a lot—of the comics. I'm not particularly bothered about which particular retcon or alternate Earth we're talking about, but I'm hoping for more concrete specifics and depth than the easily googled wiki entries on each character offer.

In almost every incarnation of Lane's character (and every single incarnation of any real quality), Lois Lane is NOT a "damsel in distress," like many superhero girlfriends. Rather, she's a hard-bitten, tough-as-nails reporter whose attitude captures Clark's attention and fascinates him. Just Google "Lois Lane" and you'll get a parade of pictures of the character looking hard-to-please: 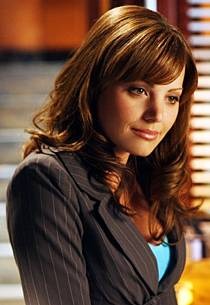 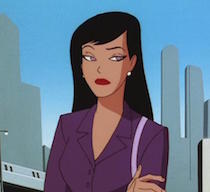 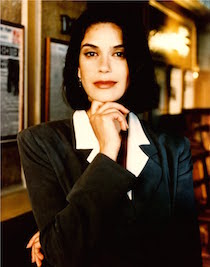 She's also famously defiant, refusing to stay out of harm's way, and when she does get herself in trouble, she is cool and confident under pressure. 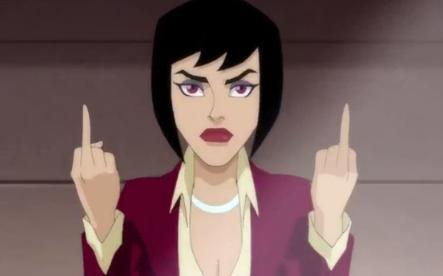 Their relationship is riddled with scenes in which Kent's home-spun sweetness is contrasted with Lane's big-city cynicism. For example, in the Justice League cartoon, we get the following scene, in which Superman whisks Lois off to a picnic on top of a bridge tower overlooking Metropolis:

Lois: A picnic? I suppose your high school sweetheart loved this kind of cornball stuff.

Clark: (with a smile) As a matter of fact, she did.

As in so many real-world relationships, Clark and Lois are attracted to their opposites:

As for your extra credit question, the answer is "both."

In many (undoubtedly the majority, if you include the whole history of the characters), Lane has no idea that Superman is Clark Kent. In this telling, Clark often pretends to be so clumsy and so inept, that Lane never looks at him twice. She's WAY out of his league. She falls in love with Superman, and during some dramatic moment, he reveals himself to be Clark Kent. She usually has trouble believing it for a while.

However, there are plenty of stories in which she has flirtations or an attraction to the goofy Kent before she can really develop a rapport with Superman himself. And oftentimes they're simultaneous, either before she knows they're the same person (like the famous Spider-Man/MJ dynamic), or because she immediately learns they're one person (like she did in Man of Steel).

Superman always had things with people by the initials of LL. Some were his lovers (Lana Lang), some his adversaries (Lex Luthor).

So Lois must have been a person of interest right from the start.

In The Adventures of Superman #646, Mr. Mxyztplk suggested that the initials had an important significance within the Kryptonian Language.

It's not entirely certain what the significance was though.

There are many reason you could see Lois Lane as nothing less than outstanding. Whilst most other love interests, particularly in comics, are the damsel in distress, and you could classify Lois under that label earlier days, now she is seen more as independent and strong. But even in saying that, since the beginning of her appearances, she has always been fearless- looking for trouble.

One reason Clark has come to see Lois under such a fascinating light, is her fearless attitude. For example, in Superman Unbound she didn't hesitate to give Brainiac a piece of her mind. Not to mention how many times she's talked down to Lex Luthor.

Lois, especially in the recent years, isn't the typical comic book woman. The house wife, the cook, the stay-at-home mother. She's never displayed those qualities. Her biggest setback with any man is her refused to settle down. Of course, she has made the exception with Clark. He was the first man she could ever really commit to (except Bruce Wayne in Superman/ Batman: World's Finest before she found that he was Batman), even warning him that she was obviously wearing the pants in the relationship.

She likes to take charge, find trouble, make a difference. She believes that nothing less than the truth should be promoted, along with Justice and a non-corrupt society. One reason she fell in love with Superman was that he stood for truth just as she did - of course he fell in love with her for the same reason.

Lastly, her wit. Shown from the start, Lois has always been the one to lighten the mood in any situation, appropriate timing or not. Somehow, she always managed to find some one-liner or quip in every circumstance. Why wouldn't Clark fall for someone who would always be able to find humor everywhere? These qualities were shown most clearly in Lois and Clark: the Adventures of Superman, the Smallville series and Smallville Season 11 series. Also with the following comics from any series.

The more recent series "Superman and Lois" shows a version of Lois that is immediately attracted to Clark and not interested in Superman at all.

One detail I love is that Lois is the more flirtatious of the two when she’s hanging out with Clark, while Clark is the more flirtatious one when he’s in his Superman persona. It speaks to the way the tights and cape let Clark act with a swagger of anonymity that he doesn’t have in his human persona. And it’s absolutely adorable that Lois actually prefers Clark’s nerdiness to Superman’s confidence.

Here, though, the show goes to great lengths to show Lois as someone frankly uninterested in Superman because of course she wouldn’t care about the guy saving kittens from trees when she’s busy rooting out the source of neo-nazi attacks on minority neighbourhoods because this isn’t the 30s. Metropolis needs to have real problems for Superman’s presence to even matter in the first place and the way the show explores Clark’s naïvety in contrast to Lois’s keen eye was perfect. Putting Clark in Lois’s life before Superman creates that lasting bond between the two long before Superman even enters their life, making that revelation down the line matter all the more.

Not the answer you're looking for? Browse other questions tagged superman dc or ask your own question.