Why do Oberth Class starships have no saucer strut?

In Star Trek III: The Search for Spock, we encounter an Oberth Class starship for the first time, namely the USS Grissom: 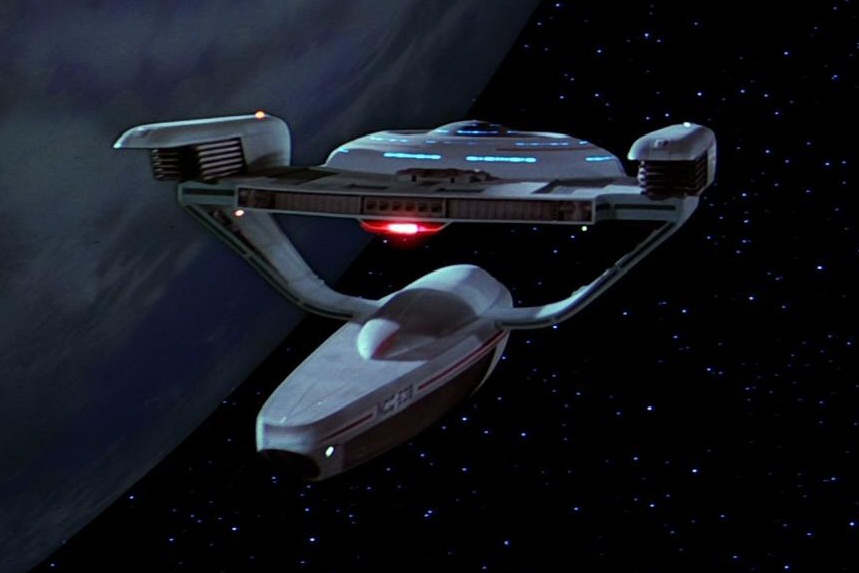 An interesting feature of its design is that the saucer section is connected to the warp nacelles, instead of having a central strut.

Noting that the Grissom is a science vessel, what is the reason or advantage behind this relatively atypical design?

In particular, it seems that crew members travelling from the saucer section to the drive section would need to take turbolifts that pass through one of the nacelle struts. At first glance, this is less efficient than turbolifts passing through a central strut.

Is there some benefit (e.g. a scientific one) to be gained from leaving the space between the saucer and drive sections completely open?

I am looking for an in-universe answer. (Out-of-universe, the Rule of Cool almost certainly applies.)

There doesn't seem to be an in-universe reason provided, however, I'll make a few stabs in the dark.

The outboard plan of the Oberth's design incorporated a unique split hull design, with an upper primary hull that was composed mainly of the saucer section, which was mounted onto a rear extension that mounts the impulse drive, and warp drive nacelles to either side to the saucer. The secondary hull was connected to the primary hull at the nacelles by reinforced pylons. The secondary hull itself was oblong in shape

According to the Memory Alpha page on the Oberth Class, as a science vessel, they were fitted with specialised shielding to allow the ship to cope with pushing through gravitational wavefronts. There could be an advantage in separating the saucer from the main body of the ship in this way. It could result in reduced hull stress potentially by increasing the surface area (I'm no physicist so I don't know if this is a sound conclusion (pun intended)).

Alternatively, it could be an contingency plan. As they were predominately designed to be a science ship, should something go terribly wrong in one hull, then the connections in the pylons could contain dividers which seal off the offending hull. Now, there is no evidence that I have found to support to this conclusion, just warning you, however it seems a reasonable conclusion to me. There is no secondary bridge according to the schematics I've looked at at least, however, according to the Memory Alpha page, in DS9: Emissary we see the secondary hull had a docking port, whilst we know that the primary upper hull had a shuttlebay and access to escape pods, so from either hull one could exit the ship.

It doesn't say so anywhere I've found, but the lower hull may be a modular or "swapable" section. Since its such a small ship and its scientific duties would be widely varied, it seems reasonable that the lower hulls can be swapped out for mission-specific platforms. This would increase their flexibility and reduce the costs of building several whole ships, and having them separated from the hull would make the process a lot faster and simpler.

For example, if Starfleet expected to need (over a 5-year period) three small ships for planetary surveys, three for space phenomena studies, and one electronic warfare platform for the fleet, they'd need to build seven ships. Or they could build three ships plus four additional lower hulls at a third to half the price that could be stored until needed.

Keep in mind that, as the Oberths got older, more were seen as specialist ships, not always science vessels. By the middle of TNG and the beginning of DS9, Oberths were being used as personnel transports, high-priority freighters, couriers, tech support ships, etc. The Cochrane was Admiral Setie's personal VIP transport for awhile, then continued as a long-range personnel carrier. The Pegasus was used to test experimental equipment, such as a Federation cloaking device and the Type-X phasers. I've even seen an image of one without the lower hull being used as shipyard's tug/crane. (BTW, the same thing happened to the real world BB-5 Kearsarge when it was converted to Crane Ship No.1 in 1920.)

The modular idea isn't without precedent. Bridges, sensor pallets, and other external equipment are known to be "plug-and-play" modules. One of the theoretical replacements for the Galaxy-class included huge pie-shaped saucer sections that could be swapped out for mission-specific needs. So again, its just a theory, but it makes a lot of things make more sense.

I always imagined that, as a science vessel, they might be regularly working with hazardous compounds or infectious contagions that even a level-ten forcefield couldn't contain safely.

By keeping the critical ship's operation areas like the bridge, engineering, etc on the top/primary hull, and keeping the science labs and hazardous materials storage in the lower/secondary hull, they could have an additional level of safety and decrease the likelihood of a catastrophic, ship-destroying incident.

As for getting between the two sections, maybe they are intentionally separated? If not, I speculate they are accessed exclusively through Jefferies tubes on either nacelle strut.

Also, I bet they have an explosive bolt system to allow a one time separation so that the primary (or secondary, in the case of a warp core breach assuming a primary hull engineering bay) hull can be used as a life boat, and put some distance between the crew and the impending doom.

Could be that the lower hull was strictly sensors and related equipment, and rarely needed crew access. The Romulan Warbird of the TNG era had a similar design, although, with Romulans, who knows why

The Oberth class science vessel is limited to a low warp speed ref Memory Alpha page.
It is also the most prevalent Federation in the vastness of of Federation space. ref fleet size and strengths of DITL
It is seen to have exceptional shield strength as seen in TNG episode Hero Worship against gravimetric sheer.
I propose that all these, plus the fact it is named after scientist Berth, that the divergence in appearance to other Starfleet vessels, is that it regularly uses the Oberth effect to achieve a very high, efficient warp velocity. This is a recognised procedure as used in the ST movie, Voyage Home by Kirk.

15
How fast can the Galaxy class Starships go in reverse?
7
Other starships that can undergo saucer separation?
4
Why didn't the Sovereign Class have folding warp nacelles?
10
Were the NX-class starships named after the Shuttles?
0
Invincible and Prudhoe (Bay) class Starships
20
Why does USS Discovery's saucer section spin?
13
Can Galaxy-class starships eject their warp nacelles?
16
Can a Galaxy-class saucer section join onto a Nebula-class ship?
5
Do any non-Federation starships have deflector dishes?