Battle of Hoth: how did the AT-ATs manage to disable the shield generator?

(This question is related to How did the AT-ATs get to the surface of Hoth?, and was originally posted as an answer there, but it's not the same) 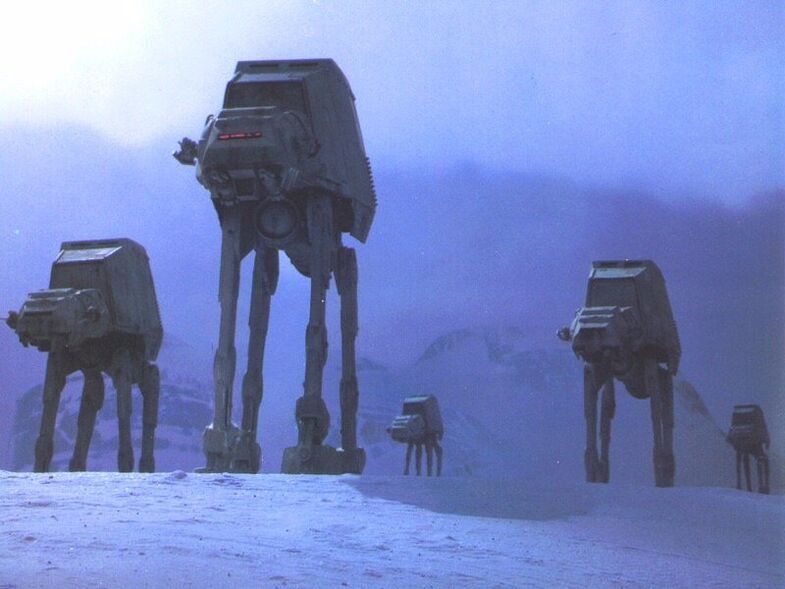 In The Empire Strikes Back, the Empire attacks Rebel Echo Base located in Hoth. The Rebels are alerted before the attack, and raise some sort of shield to prevent orbital bombardment of their base. The Empire is then forced to deploy land forces to first disable the shield generator, before destroying the base. Presumably, the Imperial forces are deployed using dropships.

My question is about how the Rebel shield generator works, and how the Imperials manage to bypass it.

I think the shield generator is something of a plot hole. At first I incorrectly thought it was a planetary shield (i.e. a shield around all of Hoth) preventing orbital bombardment, and also preventing any dropships (with their AT-AT payload) from landing, but I think Wookieepedia got it wrong: the script states it is an energy field around just an area of Hoth, presumably Echo Base:

VEERS: My lord, the fleet has moved out of light-speed. Com-Scan has detected an energy field protecting an area around the sixth planet of the Hoth system. The field is strong enough to deflect any bombardment.

So my initial objection ("how did the Imperial dropships bypass the shield?") has been answered: they didn't. They landed outside the energy field to deliver the AT-ATs. But now I have another question: does an AT-AT have to walk inside the field to fire at the generator, or can it fire into the field from outside?

Maybe the field simply cannot stop matter, only energy weapons (therefore preventing orbital bombardment), in which case the AT-ATs would be able to just walk inside. However, the script also states:

LEIA: All troop carriers will assemble at the north entrance. The heavy transport ships will leave as soon as they're loaded. Only two fighter escorts per ship. The energy shield can only be opened for a short time, so you'll have to stay very close to your transports.

So it's clear that the energy field is also capable of stopping matter, in this case troop transports and fighters. It follows that it should also prevent AT-ATs from walking through it. So the only way I can see the walkers disabling the generator is by firing into the energy field!

This would mean the field is strong enough to stop matter such as ships and fighters, and energy weapons used for orbital bombardment (and also the Ion Cannon the Rebels use as an anti-orbit battery: Leia also states they must lower the shield to use it), but not able to stop whatever energy weapons the AT-ATs use!

So how on Earth did Imperial Walkers manage to disable the shield generator?

The most obvious answer is that the energy shield does not extend all the way to the ground. This would make sense, since the terrain is mountainous and uneven. Instead it could form an umbrella above the base that prevents shots and ships from passing through, but which the AT-ATs could simply walk under the edge of.

I recall some mention that the shield did actually stretch all the way to the ground, but it was of a type that didn't impede the AT-ATs because they're relatively slow. Such shields do exist within the SW universe:

The Gungan shields used during the Battle of Naboo blocked lasers, but droids could pass through because of their relatively slow movement in comparison to the laser bolts. Some shields only held back anything with a high-energy output, allowing sentients to pass through unharmed.

The relevant Wookieepedia entry doesn't specify which type of shield it is, unless you take "umbrella" to mean not reaching the ground. Possible, but I don't think it's a certainty.

Two reasons this could be the case:

The alliance was fairly limited on tech and scientists. The base took two years to construct, and was invaded about a year thereafter. It could well be that it's much easier (in time and resources) to create an energy shield, and the scientists they brought to create the shield set one of those up first (possibly planning to upgrade it later).

And I'm pretty certain there is a mention of another modern shield of this type somewhere in the EU (but I don't remember where and that's a lot of material to scour), indicating they were still in use well after Hoth.

Perhaps I'm remembering incorrectly, but I believe the reason they dropped the shield is so that they could then shoot the ion cannon that they had on the surface and disable the Star Destroyer that was in the way. This way the transport and small X-wing complements could just fly past and enter hyperspace without having to deal with a drawn out space battle. I imagined Leia telling the pilots to stay close to the transport was meant in case they missed or something and therefore they needed to make sure they're not flying too far away from the transport because it would need immediate protection.

Leia's reminder is still a little weird in this case (if you're on escort duty, I'm not sure why you would be flying away) but I think it still fits.

In this way, the shield generator was meant to stop energy weapons, which would include the ion cannon. Hence they need to drop the shield in order to fire the cannon. Matter could bypass it.

Like in Dune, the slow walker penetrates the shield. The shield was designed to repel energy and high velocity particles. Wookieepedia states the AT-TE (a previous design) could walk right through it...

An AT-TE was impervious to ion damage due to built-in electromagnetic shielding. Its average speed was 60 kph (37.2 mph). This plodding pace allowed it to penetrate energy shields, a feat that was impossible for repulsorlift craft.

In addition, the Hoth shield was an umbrella shield only designed to defend against orbital bombardment. Presumably it came low enough to the ground to prevent low flying aircraft from entering (TIE Fighters aren't good enough in atmosphere to risk it), but it was generally oriented up. AT-ATs and ground troops could walk under it.

The Empire had two goals during this battle:

In short, the shield generator was nowhere near the shield itself (I know, right?). If it wasn't for it being so theatrical, Gen. Veers and Blizzard Team could have just landed right at the rebels' door step (just outside EB hanger), but the calm before the storm builds tension and is much more dramatic in a war movie.

I don't know what level of Canon the old Rogue Squadron games were, but I remember playing the Hoth level. If I'm not mistaken, the shield generators did not shield themselves. At the time (as a ~10 year old) it seemed like quite a major design flaw....

My theory is that you can't shoot or fly through a shield, but you can walk and probably roll through them as long as you remain in contact with the ground. Theater shields have been used twice in the movies (Battle of Hoth and Battle of Naboo). At Hoth it is established that the shield can withstand bombardment so they land AT-ATs which walk through the shield then destroy the power generators so the rest of the attack can land. During this entire sequence the much better equipped Imperials have no air support just heavily armored walkers. At Naboo, it is established that the shield can withstand bombardment from the tanks, the Trade Federation sends in its droids which destroy the generator so the hovering tanks can attack. If something solid can pass through why didn't the Gungans fire their catapults at anything outside of the shield. If something slow moving can pass through the shield, why didn't the tanks just slowly fly through them instead of waiting for the shield to get destroyed. This also explains a couple of weird things like why the Vulture droids (which are starfighters) are designed with the ability to walk and why the Empire uses walkers instead of hovering transports.

The game, Star Wars Battlefront, specifies that the Empire deployed a special division of Stormtroopers to take the shields out. The walkers carried these troops safely into the barrier and the troopers secured the area around the shields before the walkers destroyed them.

The troopers were most likely acting as insurance in the off chance a rebel guarding the generator was carrying a heavy ordinance weapon.

The shield is an umbrella shield that blocks both energy and matter, but it's atmospheric. It is purely a defense against aerial bombardment, and the generator isn't strong enough to protect an entire planet. It is not a ground defense. Unlike, say, the Millennium Falcon which can focus its shields on different parts of the ship, the front or rear, the Hoth shield can only be focused in the "up" position and is either on or off. As said above, the At-Ats can be dropped outside the perimeter of the shield and walk in underneath. It's a flaw in Hoth's defences, (obviously was necessitated by the story) BUT, to Lucas's credit, he's consistent. It's a defensive flaw the Rebels themselves are obviously aware of, with their networks of defensive trenches and laser towers.

Leia's admonition to "stay close to the transports" makes sense precisely because the shield stops both energy and matter. If the x-wings get too far ahead of the transport they will be pulverized by hitting the shield before it's lowered. If they lag too far behind they risk crashing into it after it's been raised again.

Other than Leia's comment about briefly dropping the shield to allow the shuttles and X-wings to leave, it would be easy to believe the Hoth shield worked the same way.

The Gungan shields were projected upwards and did appear to be thicker up higher, so perhaps the shield it more impermeable the closer to the point where it is being initially projected.

73
What is the benefit of an AT-AT walker over a conventional tank?
28
Why didn't the Empire send other forces in alongside the AT-ATs?
58
How did the AT-ATs get to the surface of Hoth?
3
What was the whole purpose of destroying the shield generator in ESB?

58
How did the AT-ATs get to the surface of Hoth?
25
Could Vader really have crushed the Rebels on Hoth?
24
Was Luke Skywalker technically a deserter in ESB?
73
What is the benefit of an AT-AT walker over a conventional tank?
8
Why does the AT-AT Driver spell out the word DECIMAL?
65
How did Darth Vader know the rebel base was on Hoth?
5
Why is the shield generator on Hoth not underground?
12
How could the Death Star II fire through its shield?
50
How did Kendal "as clumsy as he is stupid" Ozzel attain the rank of admiral?
1
Why weren't communicators used to coordinate the Battle of Endor?