Why would Shelob own Sauron?

In Lord of the Rings: The Two Towers, in the chapter Shelob’s Lair, there is a rather lengthy description of Shelob, the last remaining child of Ungoliant in Middle-Earth. In this, there is also a description of her relation with Sauron:

And as for Sauron: he knew where she lurked. It pleased him that she should dwell there hungry but unabated in malice, a more sure watch upon that ancient path into his land than any other that his skill could have devised. And Orcs, they were useful slaves, but he had them in plenty. If now and again Shelob caught them to stay her appetite, she was welcome: he could spare them. And sometimes as a man may cast a dainty to his cat (his cat he calls her, but she owns him not) Sauron would send her prisoners that he had no better uses for: he would have them driven to her hole, and report brought back to him of the play she made.

I’ve never understood the bolded bit there. Tolkien is saying that Sauron sometimes sent prisoners to Shelob to keep her less-than-ravenous and in check, in an almost playful way, the way you might throw a dainty to your cat. So clearly Shelob is the cat.

But then why does it say, “but she owns him not”? Surely if she were the pet and Sauron the master, as seems to be the explicitly denied premise, he should own her, not the other way around.

Was Tolkien one of those cat-lovers who say that you never own your cat—your cat owns you? I don’t know why, but I’ve always assumed that was a much later jocular meme. Is there some other logical explanation for this seeming reversal of ownership?

According to a similar discussion on another site, Tolkien is using "own" in a more archaic sense of "acknowledge" or "yield to." The Oxford English Dictionary article on own contains one definition (4.c) of "own" as "To acknowledge as having supremacy, authority, or power over oneself; to recognize or profess obedience to (a greater power, a superior, etc.)."

If this is the case, the phrase could be re-worded to be...

His pet he calls her, though she doesn't recognize his authority.

His pet he calls her, though she doesn't agree.

To supplement Nerrolken's excellent answer, here is how the site dictionary.com defines the relevant usage of the word "own":

verb (used with object)
to acknowledge or admit:
to own a fault.

to acknowledge as one's own; recognize as having full claim, authority, power, dominion, etc.:
He owned his child before the entire assembly. They owned the king as their lord.

verb (used without object)
to confess (often followed by to, up, or up to):
The one who did it had better own up. I own to being uncertain about that. 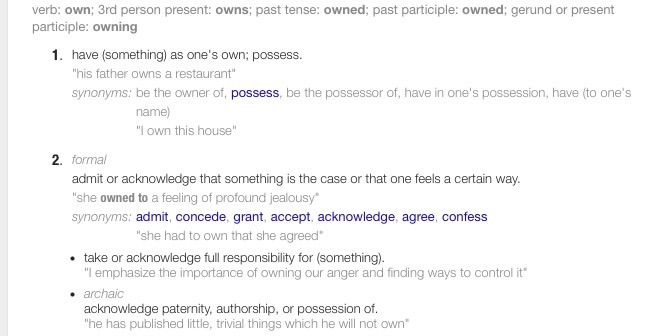 In this case, "own" means "admit" or "acknowledge", not "claim possession of".

So the sentence isn't saying that Sauron doesn't belong to Shelob, it is saying that she doesn't acknowledge that she belongs to him.

Or to use the example from my quote under the second definition: "She did not own [i.e., acknowledge] him as her lord".

Another possibility is that Tolkien was using not an archaic version of "own", but an ironic notion - common to cat lovers and haters (with Tolkien strongly established as the latter) - that "really", it's the cat owning her human, not vice versa.

Even more ironically, that humorous slant seems to be more true than not. Science FTW!

Not the answer you're looking for? Browse other questions tagged the-lord-of-the-rings tolkiens-legendarium language-explanation or ask your own question.

36
Did Shelob Die?
28
Is Shelob a Maia?
25
What did Sauron mean when he "talked" to Pippin?
49
Why would Gandalf (as ring-lord) be worse than Sauron?
5
Does Shelob have tusks?
15
What exactly was the understanding between Gollum and Shelob?
104
How is Shelob's name known?
41
What was Mordor's history before Sauron settled there?
140
Why is Shelob considered evil?
12
Why did Gondor build the tower, Cirith Ungol, near Shelob's lair?