Can the Federation's “Quality over Quantity” (k-strategy) philosophy defend itself on its own?

Most people would notice that the United Federation of Planets fields very powerful ships - the Galor class Cardassian ship and the Klingon Bird of Prey, though staples of their respective fleets, would seem to be at a serious disadvantage in a one-on-one with many of the Federation vessels we know about.

We know that the Federation has better sensors than the massive Warbirds of the Romulan Empire, but that even they are very often seen travelling in pairs - Federation ships, however, are generally alone.

However, when the Federation does have to potentially combat these fleets, they are often portrayed as seriously outnumbered. This numerical handicap suggests that we aren't just seeing the Federation's finest vessels, but that they are building fewer and better ships than civilizations that may pose a threat to them.

This is all despite that fact that those civilizations are just as intelligent and usually have access to (on average) comparable technology.

This seems like a huge combat disadvantage. As we know from nature, K-strategist species (species that reproduce slowly and invest much in new members which are usually intelligent: elephants, for example) are badly outnumbered in both type and count by R-strategist species (species which produce many offspring and refuse to care for them - fruit flies, for example.)

But there is a further reason for that: vessels of all kinds have what is called an exponential problem curve, meaning the more problems it already has, the faster it gets worse. For example, if shields are weakened, engines are far more likely to become weakened quickly, and vice versa. If life support is damaged it may hinder repair efforts: so on and so forth. In other words, the more problems a ship has, the more likely it is to get more - non-linearly, in fact. (And I read about this in a real book on Naval warfare.)

Thus, if a mighty Galaxy class ship is fighting three Klingon Birds-of-Prey, and he damages one, he still has to start two more firing enemy vessels down the slippery slope of their exponential problem curve. If the Galaxy class suffers one lucky hit, however, the battle is almost already lost.

Worse, I would have to guess that adding fire-power would be much cheaper than adding a Science Suite (though I'm not sure.) I.e, perhaps a few small specialized warships are a more efficient use of resources, for combat, than a few large ships with many extra features?

Therefore, my question remains: is the Federation actually much weaker than the other major powers? Are there non-idealistic reasons for the Federation choosing this quality-over-quantity strategy? Its vessels could easily turn a close battle between weaker kinds of ships, but could it even defend itself on its own?

No, the Federation is not weaker than the other races in the Alpha quadrant, even if they produce less ships overall because their ships are better and likely to get far better, far faster than the other races around them. The Federation is a science-oriented culture, they are interesting in both theoretical and practical advances in science which gives them a great advantage over all other empires in the Alpha Quadrant.

While quantity is a quality all its own, it does not always offset a simply superior design or supplement poor quality capacity. If you have weak ships, they may be offset by an enemy with whom shields are so powerful, you will have no effect upon them no matter how many ships you bring to the fight. 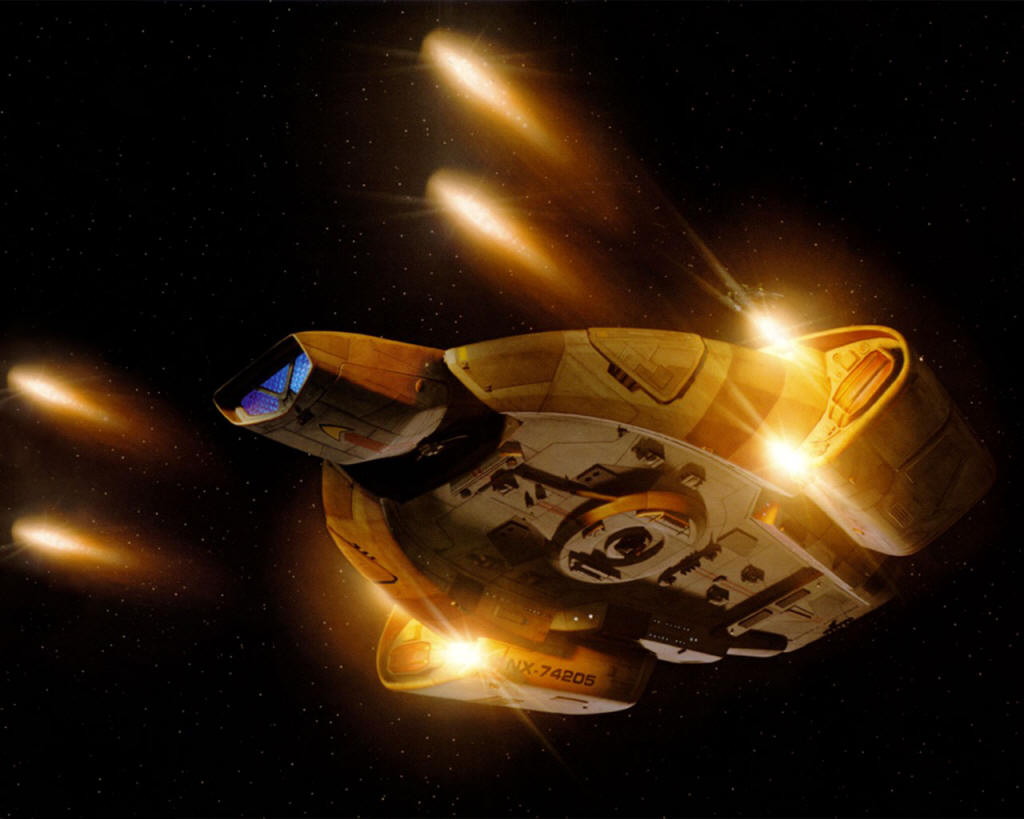 The Federation, as empires go, is a relatively scrupulous one, but not every leader is equally scrupulous. 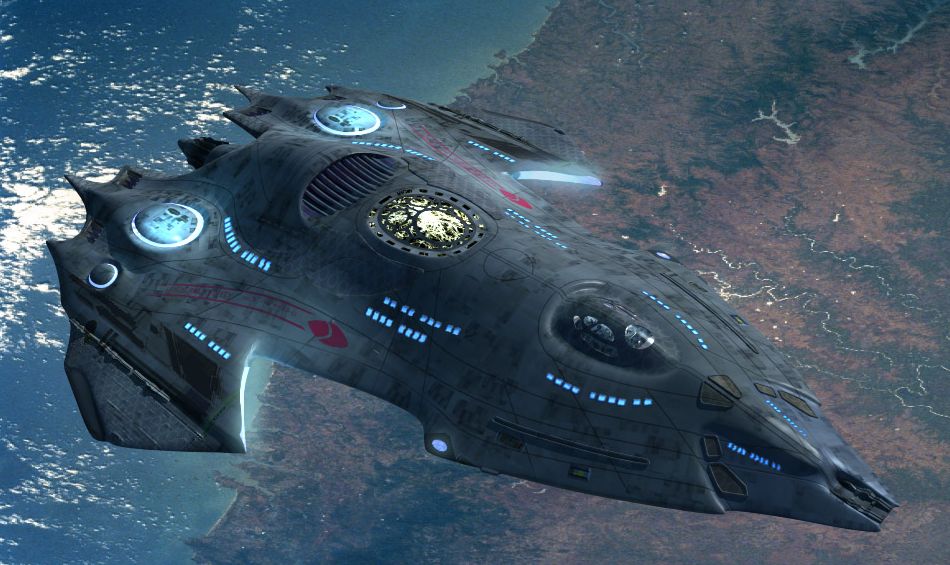 Simple answer, because Roddenberry insists that Starfleet is not military. Its primary mission is scientific and cultural research, not military strength. The Galaxy class ship has a substantial civilian population.

As for quality over quantity ruling, remember that a single Borg Cube tends to annihilate multiple Federation capital ships. But in the TNG era, there is no active war in which multiple ships need to constantly be paired in case its enemies attack.

In DS9 we see small numerous ships being built (the Defiant class). These are war ships, and the thought process that goes into them is war, not research.

In the famous Lensman books, a fleet of millions of space battleships from one galaxy once destroyed a similarly vast war fleet from another galaxy, then headed for the capital planet of the second galaxy. But they didn't dare to even enter the solar system the capital planet was in, because another planet in that system was fortified with so many and so powerful weapons that it could have stopped them. That fortress planet was many times more powerful than the millions of space battleships in the entire space fleet of either realm.

The reason why sometimes the Enterprise is the only ship available to defend Earth is because the defense systems of Earth are so powerful than its seems perfectly safe to leave the solar system unguarded by ships.

The Earth defense system is only mentioned when it fails when attacked by superior alien forces in Star Trek: The Motion Picture, Star Trek IV: The Voyage Home, "The Best of Both Worlds", and probably Star Trek: First Contact. And it has probably been upgraded after each such failure.

The hypothetical planetary defense screen of Earth is probably designed to withstand the firepower of the combined Romulan and Klingon fleets for hours, days, weeks, and months while a Federation fleet is assembled to attack them. The hypothetical super massive and super powered phaser banks and photon torpedo launchers on the ground and in orbit are probably designed to destroy tens, hundreds, and thousands of enemy ships before they can even get close enough to use their weapons on the defense screen.

Many other Federation, Romulan, Klingon, Tholian, Gorn, First Federation, Cardassian, etc. planets may also have such powerful defenses which would stop any attacking fleet, and so they are an important part of naval strategy. Numbers and power of warships is not the only important strategic factor.

In the space opera I mentioned the defense planet planned to let the attackers get "almost to ground level" and then vaporize them. "Almost to ground level" probably means billions of miles or something. And this plan was AFTER both sides in the war had ALREADY attacked with mobile planets hoping to smash them into the target planet, and had tractor and presser beams powerful enough to deflect moving planets!

If a planetary defense system was powerful enough, it could vaporize and/or defect swarms of asteroids as fast as they could be detected.

The answer is- it depends. History has shown many times small elite forces defeating much larger non-elite forces. History is also replete with small elite forces that lose a war through attrition or because the society that fielded them were unwilling to inflict (The US in Iraq) -or sustain (The Spartans following the Peloponesian war) - the necessary casualties to prevail. The assumptions behind Gene Roddenberry's Federation indicate they will face the same issues. From a strategic standpoint- the Federation will have to go against it's own grain and be very aggressive in order to take out that numeric superiority of the enemy. Because if it doesn't it runs the risk of what happened in the General war. The war ended because of sheer exhaustion on all sides. Although the Federation was in a quite good strategic position at the end it nevertheless welcomed the end of hostilities. However- the stage was set for future conflict because the General War ended up with no decisive victory- hence the condition were set for all sides to re-arm and re-ignite the conflict a few decades hence.

13
How much unclaimed space exists in and around Star Trek empires?
15
Why didn't the Borg have/use cloak technology?
4
Why was the Grissom sent alone to study the Genesis planet in Star Trek 3 : The Search for Spock?
8
Why does the Federation prefer mainly space-borne starships?
16
Does Star Fleet make accommodations for alien crew members?
26
Is there a canon reason why Klingon and Romulan vessels are so similar in shape?
5
Is the thin design of Romulan ships a vulnerability in Star Trek?
3
Starfleet Fleet Size: Any explanation for the discrepancies?