I read the books about 15 years ago, borrowed from a local library in Germany (books were in German, but I assume they where translation of an English book series).

It was a book series set in a high fantasy world. The protagonist had to set out to gather a number of stones/crystals that where associated with the elements (Fire/Water/Earth/Air). I think each book was themed after one of the crystals (I seem to mostly remember the blue cover of the water book). There might have been more books after the four initial ones.

I remember the protagonist at one point losing one of the crystals again.

I think after each journey the protagonist returned to a special place / sanctuary (maybe an island?).

At some point of the story the protagonist, enters a "cursed" / deathly cave system, that has some kind of yellow / black ancient markings, which from the descriptions can be identified as the nuclear power sign (suggesting that the cave system kills via radiation).

I think there was a map of a coastal region, that could be identified as part of North America, but with different places.

While looking for matches, I came across the Shannara series(es) by Terry Brooks which seems to fit part of what I remember (post-apocalyptic fantasy world), but none of the books seem to match the crystal/stone gathering quest.

I feel there are a lot of links with The Death Gate Cycle, by Margaret Weis and Tracy Hickman.

The Earth was destroyed.
Four worlds were created out of the ruin. Worlds for ourselves and the mensch: Air, Fire, Stone, Water.
Four Gates connect each world to the other: Arianus to Pryan to Abarrach to Chelestra.
A house of correction was built for our enemies: the Labyrinth.
The Labyrinth is connected to the other worlds through the Fifth Gate: the Nexus.
The Sixth Gate is the center, permitting entry: the Vortex.
And all was accomplished through the Seventh Gate.
The end was the beginning.
— Weis & Hickman, Into The Labyrinth pg. 9

The main conflict is between two powerful races, the Sartan and the Patryns, which branched off from humans following a nuclear/anti-matter holocaust. — Wikipedia

It is high fantasy in the sense that it also contains "ordinary" humans, elves, and dwarves (collectively referred to as "mensch"), as well as dragons and magic.

The first four books (out of a total of seven) each focus on a separate elemental world:

At the end of each book, the protagonist returns to the sanctuary city of the Nexus, being the centre of the deadly Labyrinth into which the Patryns were imprisoned by the Sartan. I remember the starting point of the Labyrinth to be inside a cave system which chimes with your own recollection.

The blue cover of the "water" book:

Elements from your description that I can't quite place:

I had been trying to figure this out too! It just came to me.

I think you're looking for the Thunderscape: World of Aden novels. 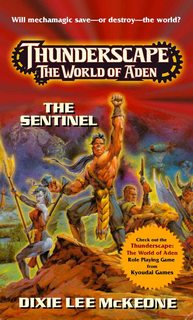 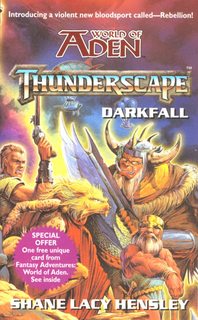 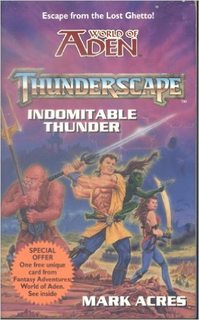 I finally remembered because the name of one of the races came to me - the rapacians.

I haven't read them all, so I can't speak to all the plot elements. It does look like this is only a series of 3 instead of four, and the none of the covers is predominantly blue. So I hope this is the right answer!

Elements that match - search for elemental crystals, losing one at some point, fantasy adventure setting

Not the answer you're looking for? Browse other questions tagged story-identification books post-apocalyptic or ask your own question.

8
Fantasy series where each book takes place on a different world that overly expressed a certain element?
5
Can't remember fantasy novel with magic and technology mixed, search for elemental shards/crystals