I know that this sounds like Strange Days, which I haven't seen, but from the Wikipedia description I don't think that's it.

I saw this back in the early-to-mid-90's on TV, pretty sure it was a premium channel. It follows a research group who develops a way to record experiences. Not thoughts, but at least the sights, sounds, smells, touch, etc. They record it onto this reel-to-reel tape, it looked striated and golden in color. The protagonist is the head of the research team.

I don't remember a great deal of the plot, but there were conspiracies surrounding the invention. The lab clown decides to give it a whirl by putting the bike-helmet-sized apparatus on his head and going out to have a little fun, in the classic wine, women, and song fashion. Once he returns, an older member of the team finds the tape and finds a section where the clown is having sex. Later on, the protagonist, who is the lead researcher, finds the older member shut up in his house seemingly for days and nearly comatose. The older researcher had the playback device over his head and is non-responsive. Worried, the protagonist removes the helmet and puts it on himself, only to find that the older researcher had snipped a few seconds of tape and had them running on a non-stop loop; the moment of orgasm for the clownish researcher. The older researcher eventually comes to and awkwardly apologizes.

I think there were also experiments in recording the sensorum of a lab monkey, and that played into the plot. I remember the plot seemed fairly thin and dull for what seemed to be a pretty neat idea. I don't desperately feel the need to watch the movie, but I'm mildly curious if my impressions would differ 20 years later now.

The movie you're looking for is called Brainstorm from 1983. It starred Louise Fletcher, Christopher Walken and Natalie Wood. 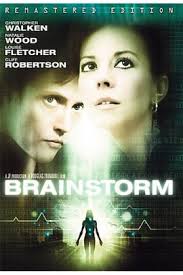 Fletcher's character invents a device that allows people's memories to be recorded on tape. A member of the team records himself having sex with his girl friend, another scientist gets a hold of that tape and puts it on an endless loop, sort of frying his brain a bit in continuous orgasms. Fletcher's character ends up having a heart attack and records herself dying. Replaying the tape almost kills Walken. The conspiracy is the Military has been following the project and confiscates it. 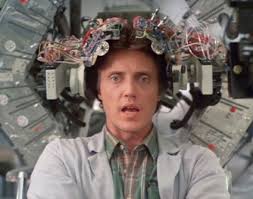 7
Name of 80s sci-fi film involving scientists recording a persons memory
2
Memory recordings and playback
15
What is the name of the movie from the 80's about scientists that build a machine that helps people share their experiences?
7
Trying to remember a movie with memory extraction