Were Agnes, Edith and Margo legally sisters prior to their adoption?

In the film Despicable Me, we meet Gru's future adopted daughters at an orphanage run by the even more despicable Miss Hattie. 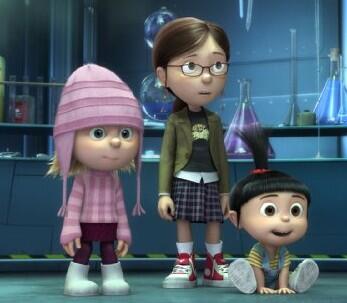 I've seen numerous references on the internet to the three girls being sisters.

But are there any official sources indicating whether they were related (legally or biologically) before they were adopted by Gru?

The script for Despicable Me 2 identifies them as sisters:

They begin walking away together, then Margo is reminded of her sisters when Edith loudly clears her throat.

However, it doesn't confirm whether they're sisters as a result of Gru's adoption or that they were legally sisters before that.

The official Despicable Me: The Junior Novel identifies that they aren't sisters by birth:

Meanwhile, in another part of town, the three little girls arrive home. Or at least it’s their home for now. Miss Hattie’s Home for Girls is the name of the orphanage where Margo, Edith, and Agnes live. They wish every day for a nice family to come and adopt each of them.
They aren’t technically sisters, but they spend all their time together. Margo is the oldest, Agnes is the youngest, and Edith is the messiest.

Once again, they're referred to as sisters in Despicable Me 2: The Junior Novel (written by the same author), lending credence to the suggestion that they weren't legally sisters until after Gru had adopted them:

All the kids turn to see Gru’s pet dressed as a dragon. His name is Kyle, and he has long, spiky teeth. Kyle is not thrilled to play the part of the dragon and grumbles, causing the kids to scream and huddle around Agnes.

Then Agnes’s oldest sister, Margo, comes out dressed as Joan of Arc. She is wearing a suit of armor and carrying a mighty sword.

I really actually don't think that they are sisters. They look nothing alike first of all, and Edith acts totally different than them. In the first movie when Gru adopts the girls, Margo doesn't say these are my sisters, she says this, "Um, Hi. I'm Margo, this is Edith, and that's Agnes." She never says these are my sisters. Also, still in the first one, When Edith "Dies" because of that "Fragile" spiky closet, the girls don't really cry or react like what sisters would do. They kinda just sat there and breathed in super loud. When they find out that Edith isn't dead, they don't run over to her and say like 'oh my gosh, you're alive' or anything.

Not the answer you're looking for? Browse other questions tagged despicable-me or ask your own question.

6
Where were the rockets of “El Macho” headed?