How was the messaging system in The Arrows of Time (Orthogonal #3, by Greg Egan) supposed to work?

In particular, why didn't messages being relayed from the future use up bandwidth and prevent new messages from being sent back?

You're right — the total number of bits that can be in transit is limited by the infrastructure. Each booster/shutter combination provides a fixed number of bits (the cameras can probably be shared between several shutters, and the mirrors can probably be shared between many cameras). The faster you can make the boosters and shutters, the more bits you get per channel, but it's still finite, and so if you want to receive more messages you may have to install new hardware.

Background (with spoilers) for anyone who hasn't read The Arrows of Time:

In the Orthogonal universe, time and space are perfectly symmetric. There's no light-speed barrier, and no distinction between space-like and time-like intervals. Light travels in all directions in 4-space, including directions that are future-like and past-like in the local frame of reference.

As a spaceship travels faster and faster relative to an observer, its frame of reference rotates so that eventually the spaceship's direction of motion is parallel (or antiparallel) to the observer's t coordinate. That is, you can travel into a observer's future or past. (How can causality possibly work in such a universe? Read the series to find out!)

A consequence of this is that it is possible to send messages from the future into the past (in your local frame of reference, of course). The technological implementation works like this: pick a star in your distant future and point a camera at it at time t=0, with an open shutter in the camera's line of sight at a distance d from the camera. (Using mirrors to extend the light path.) 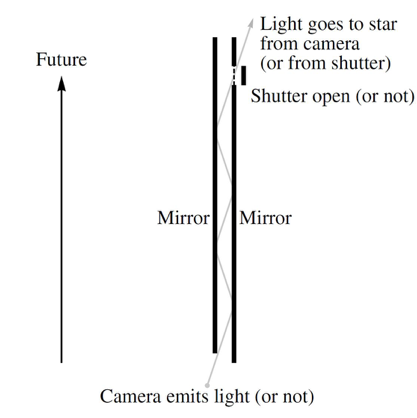 If you can build an automatic mechanism that can retransmit the bit in less time than t, then you can use this as a repeater to send the bit backwards from arbitrarily far in the future (so long as the system continues to run reliably for the duration): 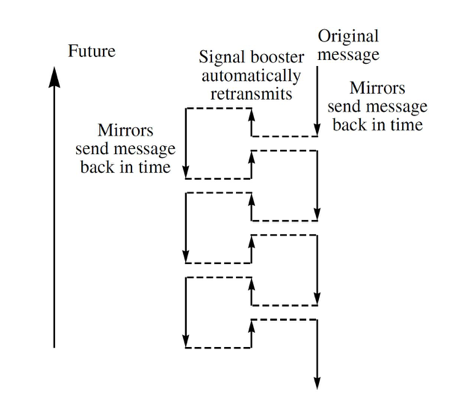 Not the answer you're looking for? Browse other questions tagged time-travel technology hard-sci-fi physics orthogonal-trilogy or ask your own question.

13
Is exponential population growth in The Amalgam addressed in Greg Egan's books?
36
Why didn't the time cops try to stop Janeway when she traveled back in time to rescue Voyager?
62
Why was Marty present in his jump to 2015 in Back to the Future 2?
12
How many different robots were sent back in time in the entire Terminator franchise?
3
How did time-travel work in The Philadelphia Experiment 2?
22
Why was the DeLorean in Back To The Future not always covered in ice after time travel, and why didn't it fly in 1885?
11
How does time travel really work in The Terminator Universe
9
Everyone of a certain age gets to send ONE message to younger self; some kids don't get messages
5
'70s era SF novel about time travel, with “Starchild” and “Rodney”