How did the police learn that John Connor's foster parents had been killed?

In the movie Terminator 2: Judgment Day, the T-1000 kills Todd and Janelle, John Connor's foster parents. The killings take place on the evening of the day he, and the T-800, arrived in 1995. In what seems like mere minutes after the killings, the police show up at Pescadero Mental Hospital and question Sarah Connor about the murders.

This seems rather difficult to explain. We see the T-1000 killing Todd on camera - it turns its arm into a giant knife and stabs him through the face. We don't see Janelle's death, but it is probably safe to assume that she, too, was stabbed to death. Stabbing is a very quiet way to kill someone, so it is not likely that the neighbors heard anything. If the T-1000 had shot them to death, it would be a different story entirely - it would be quite likely that the neighbors would have heard the gunshots, and therefore, called the police. But we can probably assume that the neighbors had nothing to do with the police discovering the murders.

It also appears that the only person who knew that Todd and Janelle were in danger was John, and although he calls home to warm them about the threat (which he does too late to save them, unfortunately), he never calls the police; indeed, once the T-800 confirmed that his foster parents were dead, he had no reason to call the police.

And yet, mere minutes after the killings occur, the police show up at the mental hospital and ask Sarah about it. They produce photos of the first T-800, from 1984, taken during his rampage through the police precinct in which he killed a billion cops. They say "These were taken in 1984." Then they pull out photos of the new T-800, taken in the mall shootout by a Japanese tourist. They say "And these were taken this afternoon."

Sarah is unresponsive. Her interrogator says:

Ms. Connor, we know you know who this guy is. I just sat here and told you that your son is missing... that the foster parents have been murdered. We know this guy's involved. Doesn't that mean anything to you? Don't you care?

But he never explains how he knows that a murder has taken place. There doesn't seem to be any logical explanation of how the police became aware of the crime.

Several factors combined to suggest that the police arrived at Pescadero within minutes, or at most, an hour or so, of the deaths.

Or rather, there is only one explanation that makes any sense to me. We do know that John's dog wasn't especially prone to barking. But as everyone knows, dogs can detect Terminators by scent, and bark like crazy when they sniff out a Terminator. When John calls home to warm Todd and Janelle, he hears his dog barking in the background, and if I'm not mistaken, he actually remarks about how unusual the barking is. If the dog, who is normally well behaved and quiet, suddenly burst into a fit of loud barking, it is conceivable that the neighbors might get annoyed and call 911. This could explain why the cops came to the house.

But it doesn't explain how and why the police got inside the house. To do that, they would need one of three things: A warrant, probable cause, or an invitation. They certainly didn't have an invitation, since the home owners were already dead. It seems unlikely that they would have a warrant either, because you don't get warrants for barking dog complaints. Could they have had probable cause? I don't see why they would. Probable cause means that the officer has very good reason to believe that a crime is being committed. Smelling pot smoke, hearing someone screaming in pain, that sort of thing. Unless the responding officer literally saw one or more of the corpses, or at least the blood from said corpses, he would not have probable cause to enter the home.

So how were the police able find out so quickly that Todd and Janelle were dead?

I think I understand the cause of your confusion; Once you learn that Max (AKA Wolfie) was killed by the T-1000 in a deleted scene and that the photo-taking tourist was present at the original police-station massacre, everything else falls into place.

The order of events is as follows; 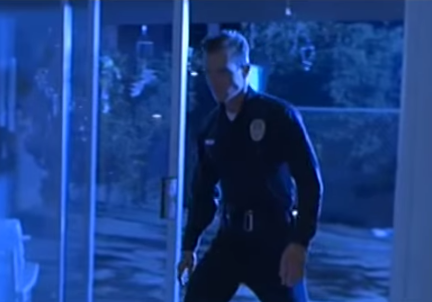 5
Who was blamed for the death of John Connor's foster parents?