Why did Luke use a synthetic crystal in his lightsaber and what were the implications of this choice?

The book Star Wars Lightsabers: A guide to weapons of the force indicates that Luke's green lightsaber uses a "synthetic" green crystal as its focusing crystal while all other Jedi in the book use some form of Adegan crystal.

Furthermore, the text claims that generally only the Sith use synthetic crystals and they form these by focusing their anger and hate during the crystal forming process.

Given this information, how and why did Luke manufacture a synthetic crystal, and does this affect his use of the light-side force?

EDIT: Thank you to those who have noted that information in this book has now been excluded from official cannon, however for this question I do not require that the answer be restricted to official canon sources. Any information from the Star Wars Universe is relevant (excluding the fan-fic you wrote in middle school of course, no matter how awesome your cousin thinks it is!).

According to the Legends novel "Shadows of the Empire", Luke did not have the time or resources to find a natural crystal. He instead built his own synthetic crystal using instructions (and equipment) left in Obi-Wan Kenobi's hut on Tatooine.

He no longer had a lightsaber, though he'd started constructing another one, using the plans he'd found in an old leather-bound book at Ben Kenobi's.

According to that book, the best lightsabers used natural jewels, but there weren't a lot of the kind he needed lying around where he could find them on Tatooine. He'd managed to collect most of the electronic and mechanical parts in Mos Eisley-power cells, controls, a high-energy reflector cup - but he had to make his own focusing jewel.

All of this was being done in the weeks following that final shot from Episode V. Luke was living in Kenobi's old hut and waiting for Leia & Lando to contact him on Tatooine, so he had a limited amount of time in which to work. In addition, he needed to stay near the hut in case they arrived, so traveling across Tatooine in search of parts or a natural crystal were out of the question at the time.

His use of a synthetic crystal does not affect his use of the Light Side, but some naturally-occurring crystals can actually enhance a user's connection with the Force, with some amplifying the Light Side and others amplifying the Dark instead. Synthetic crystals, however, are typically associated with the Sith only because of their manufactured - and therefore "easy" - nature.

And here's a picture... because it's cool: 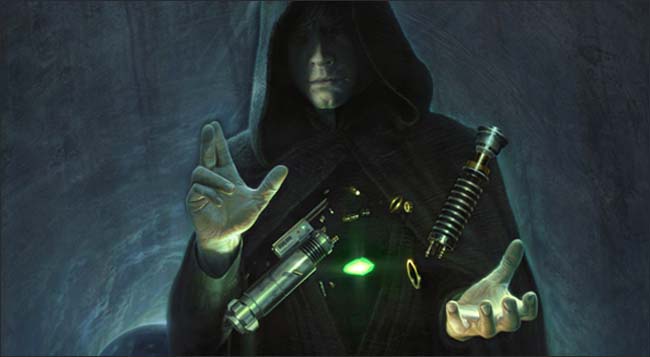 The Star Wars Wikia page lists this book in the LEGENDS category, stating that it is non-canon. Jedi use Kyber crystals in lightsabers, and an episode of Star Wars: The Clone Wars shows younglings finding their crystals on Ilum. Since the Clone Wars series is one of the few remaining canon sources since Disney took ownership, this is now the only canon source of lightsaber information. Note that the Star Wars Databank entry notes that the crystals found on Ilum are called "Ilum crystals".

The canonicity on how Luke built his lightsaber is now open to interpretation, as all previous accounts have now been rendered part of the LEGENDS category along with the crystal information.

Short answer when Luke is found and joins the fight the Jedi are all but wiped out the few remaining in hiding most like Ahsoka ditched theirs to hide their Jedi ties. As a result of all this and mostly the Jedi Order being destroyed and/or in hiding there were no more (rite of passage) where younglings would be taken to some Jedi temple and enter the ice cave that would open at a certain time & then start to refreeze while the masters stayed behind & each youngling had to choose their path & faces their own challenges to find their crystal & make it back out hopefully before the cave entrance froze shut again.

Its shown in The Clone Wars (Season 5 episodes 6 & continued in 7 & 8) when Ahsoka is one of the guardians taking the younglings on the journey to this rite of passage. Generally after a youngling finds their crystal & makes it out of the cave, they start to construct their lightsabers under the direction of an old droid who claims to remember each & every Jedi's lightsaber on the return flight to the Jedi temple. These episodes are in season 5 episodes 7 & 8 as I mentioned. Each lightsaber is custom at least during this time. The idea being the lightsaber is part of the Jedi owner & unique to them. There is no correct way to build a lightsaber only how the crystal fits if placed incorrectly that can be bad. If memory serves me once a youngling earns their crystal & starts to assemble their lightsaber it usually marks them as ready to be assigned to a master & become padawans.

Not the answer you're looking for? Browse other questions tagged star-wars jedi star-wars-legends lightsaber or ask your own question.

57
Why does Kylo Ren's lightsaber look different from normal lightsabers?
27
Is Anakin's lightsaber the only one remaining from the 'Clone Wars' era?

31
Why do the Sith use red-colored lightsabers, but the Jedi don't?
11
Synthetic crystal v. Natural crystal in lightsabers
17
How is Kylo Ren's lightsaber able to have a cross at the hilt?
12
Was the 'Official Novelisation' of Star Wars: The Force Awakens based purely on the (written) screenplay?
12
Why do lightsabers attract Force sensitives?
27
Is Anakin's lightsaber the only one remaining from the 'Clone Wars' era?
3
What explains the beam color of Death Star?
9
Is it possible to purge dark side energies from a person?
8
Could Chirrut Îmwe have constructed a lightsaber out of Jyn’s kyber crystal?