Food in the Star Wars Universe?

Are the foods in the Star Wars Universe the same as ours'? Do they have strawberries or potatoes or something? I know that they might have some food other than the food that we also have, but I'm wondering if they have any food like ours'.

This is what we see Yoda and Luke eating on Dagobah. While the script says that Luke is reluctant to eat it, but takes a sip and is surprised to find it rather pleasant, in the actual movie, he is clearly disgusted by it.

Here's what the script says:

CREATURE Patience! For the Jedi it is time to eat as well. Eat, eat. Hot. Good food, hm? Good, hmm?

[With some difficulty in the cramped quarters, Luke sits down near the fire and serves himself from the pot. Tasting the unfamiliar concoction, he is pleasantly surprised.]

LUKE How far away is Yoda? Will it take us long to get there?

CREATURE Not far. Yoda not far. Patience. Soon you will be with him.

[Tasting food from the pot]

CREATURE Rootleaf, I cook. Why wish you become Jedi? Hm?

But here's how the scene appears in the finished film (note Luke's grimace after tasting the stew):

From the Wookieepedia entry on Root Leaf Stew:

Rootleaf stew was a favorite meal of Jedi Master Yoda during his exile on Dagobah. It was a staple of his diet, supplemented by yarum seeds, mushroom spores, galla seeds, and sohli bark. Yoda prepared rootleaf stew the evening that he met Luke Skywalker.

In an unusual promotional campaign for the Empire Strikes Back radio dramatization, National Public Radio hired Craig Claiborne, a renowned chef and food critic, to create a version of rootleaf stew that could be made with ingredients originating from Earth. The recipe was published in newspapers and magazines across the United States.

[Note: As some of you may know, I'm a chef in real life, and although you have probably never heard of Craig Clairborne, I can assure you that he was a very big deal. If you've ever eaten the Japanese beef and scallion rolls in a sweet mirin, sake, and soy based sauce, known as Negamaki (or Negamyaki), you can thank Craig Clairborne for that. He invented it. He was friends with Julia Child, Jacques Pepin, and James Beard, and was the most highly regarded food critic of his day.] 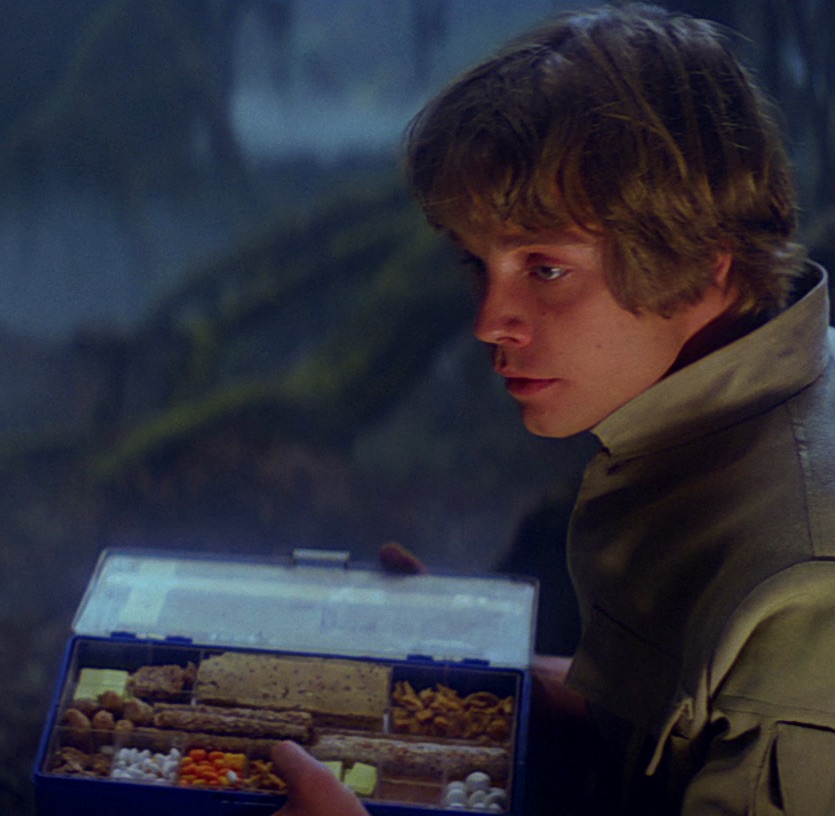 It always seemed to me that the most prominent part of these rations, which are very similar to the ones Leia nibbles on in Return of the Jedi, and then shares with Wicket, is something like a granola bar. It appears to be a crunchy stick shaped item, probably composed of nuts and grains. Luke and Leia don't seem to mind the taste, but they also don't seem to particularly enjoy it either. Yoda is outright disgusted by them, but Wicket appears to enjoy them quite a bit (although we should bear in mind that Wicket's tribe are more than happy to eat people and Wookiees, and Yoda finds his stew delicious, but Luke almost spits it out in disgust).

Wookieepedia is no help here; this is how they describe the contents of the food ration kits:

The Meal on Bespin:

In an early draft of the script for The Empire Strikes Back, in the scene in which Vader surprises Han, Leia, and Chewbacca in Cloud City, everyone actually sits down at the table and eats a meal. The menu isn't described, but the food and drinks appear to be quite good, although no one (except Lando) is in the mood for fine dining, for obvious reasons.

This is where things get a little bit gross. Chewbacca is so intrigued by the weird, dead, monkey-like thing impaled on a stick on Endor, so much so that he inadvertently triggers a trap, thereby snaring the entire team in a net, where they are soon discovered by the Ewoks. So Wookiees eat gross stuff. 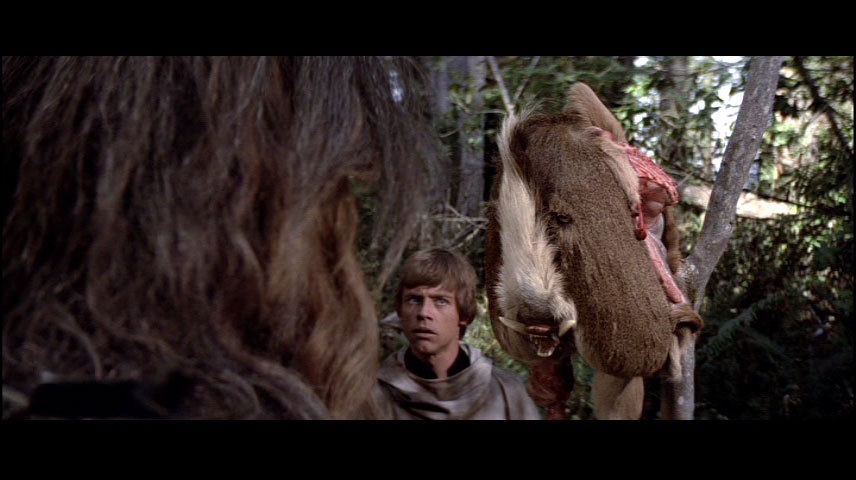 Jabba eats the frog-like creatures in the fishbowl by his throne. Also gross.

We all know that Luke, Owen, and Beru drink blue milk - at least, that's what everyone calls it. It turns out that this is actually milk from the Bantha, which are native to Tatooine, and the blue color is a natural attribute of Bantha milk. In the Cantina in Mos Eisley, everyone seems to be drinking the same thing, a strange looking, pink alcoholic beverage of some kind.

This may be the only beverage served at the Cantina, because Luke doesn't ask for anything specific, he just tugs on the bartender's shirt and nods, and the bartender hands him an already-poured glass of the stuff. The characters also drink water on occasion.

Food and Beverages Mentioned on Wookieepedia:

Wookieepedia has an extensive list of stub articles related to foods and beverages. Some of the entry titles are strange, but many of them are pretty familiar. Some of the more recognizable items include things like:

It appears that the human characters of the original Star Wars trilogy eat and drink things that are more or less similar to foods and beverages here on earth. Some of the particulars may be different - for example, the dairy products on Tatooine come from Banthas, not cows - but the similarities seem to outweigh the differences.

Yes and no, they do have some references to similar food like ours

Let me split this answer to be satisfying.

They do have many, many references about food in their universe. Almost every culture or newly-introduced setting is going along with mentions of new food types or special beverages and meals. You can look up several sortings of food on the Star Wars wikia page for food.

There they are sorted e.g. for cultural references, which will then leed to even more food. One's to be sure: They won't starve soon.

Some of them are named like ours, so you may say "yes, they do have similar food to ours". I will explain in the next paragraph why a No is more fitting. 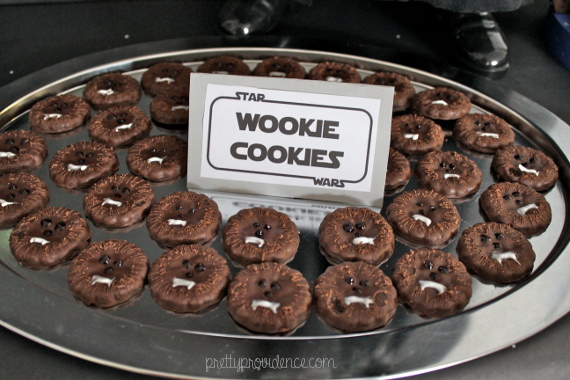 I will stick to the Chocolate. What exactly is chocolate for us? There are several types of them. Nutella for example has its flavour from hazelnuts, dark chocolate from cacoa and white chocolate has its flavour mainly from cacoa butter and milk. It doesn't mean that their chocolate does have cocoa in it. They just named it cocoa, as it may be similar to ours. While chocolate can be one by definition only with cacoa, there are also substitues with carob.

You can make these examples also with bread (you can use nearly every corn to make it) or Sushi (which basically means cooked vinegared rice prepared with other ingredients).

IMHO there is no mention of "our food" which exactly means "this our food" in particular. Sure they share a cup of Hot Chocolate, but this is more a symbolic meaning, as a Hot Chocolote excites anyone. But that doesn't mean that this is the same as we have on Earth. Maybe they just use the term to describe it for us (remember they don't talk English but Galactic Basic).

Think of it like Tolkien: On rare occasions he described happenings with words they can't know in-universe, but it's explained for us as he is the narrator.

Not the answer you're looking for? Browse other questions tagged star-wars food or ask your own question.

42
What are Luke and Yoda eating in Yoda's hut in Episode V?
-5
Do they have butter in the (canon) Star Wars galaxy?
2
Are there donkeys in the Star Wars universe?