Is Wolverine really a wolverine?

One of the theories that gets passed around once in a while is that Wolverine was, at least at one point, intended to actually be a mutated talking wolverine (the animal) instead of a mutant (homo-superior).

This theory stems from a single panel in X-Men 103, where a talking leprechaun says he doesn't believe in talking wolverines. 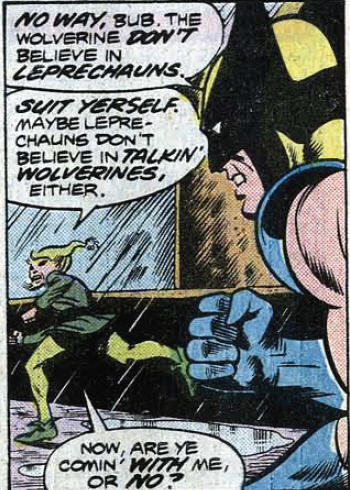 Have any writers or creators chimed in on the veracity of this interpretation, or has there been any sort of official retcon of the statement?

TL;DR: No, this is just a popular myth... but it WAS going to be his origin at one point.

When Dave Cockrum collaborated with Chris Claremont on Wolverine's origins, their original intent was to make Logan a super-evolved wolverine instead of a mutant. This was even hinted at in the classic X-Men #98:

This issue is also famous for being the first to show that Wolverine's claws were part of his arms and not his gloves.

However, Dave & Chris' plans to expand on the origin in the next issue were shut down by Stan Lee himself, who reportedly thought it was a silly idea. As a result, the idea was never made canon. Years later, a similar concept was introduced in the Wolverine: Evolution story arc.

In the "Evolution" arc, Wolverine is told that he, Sabretooth, and similar mutants like Feral & Wild Child were actually

descended NOT from apes (like humans) but instead from wolves. This was never proven and was likely just the theory of the antagonist, however.

Note: The interview where Dave Cockrum discusses this can be found in Wizard Magazine's "Tribute Special: Wolverine" issue from 1996.

Although designed by art director John Romita Sr., Len Wein was the one who decided how to write Wolverine. He was picked due to his work on an earlier comic called Brother Voodoo. Editor-in-chief Roy Thomas was so impressed by Wein's writing of accents that he called Wein up and told him "You are doing something I cannot do as a writer; I cannot write accents to save my life. I'd love to see how you'd do a Canadian accent. Uh, Wolverine's a great name."

Wein then did research on wolverines, and noted that "They are short, mean, nasty little creatures with razor-sharp claws that will attack anything twice their size and don't go anywhere near them; they will kill you. Well, that's a character defined right there." Wein implemented these characteristics into Wolverine, adding an indestructible metal skeleton (later called Adamantium) and an accelerated healing factor, therefore giving him the necessary tools to battle a character like the Hulk in a believable sense; most of this information can be found in the DVD, X-Men Revealed. Later on, when X-Men Origins: Wolverine was released, Wein said on the Blu-Ray special features that 'he has read "Ten things you didn't know about Wolverine", which states that the character was originally intended to be a mutated wolverine.'

He went on to say 'I'm not certain if the idea was first suggested by Chris Claremont, the late, much-missed Dave Cockrum, or John Byrne when he came aboard as artist, but it most certainly did not start with me.' This second part of Wolverine's explained past can be found on Wikipedia. I hope this article helps.

7
Why do mutants get their specific powers?