What happened to Fuchs in John Carpenter's The Thing?

In John Carpenter's The Thing, Fuchs ventures outside with a flare. Later, MacReady finds some burnt remains and surmises that they belong to Fuchs.

What exactly happened to him?

This question is answered in a deleted scene. Childs and Palmer go looking for him, and eventually come to the greenhouse in which they grow some vegetables and fruits - as well as their marijuana supply. There, they discover Fuchs' body, impaled with a shovel on the back of a door.

Here, the men have formed search groups to look for Fuchs who's discovered to be missing after the lights come back on. [Note: The scene in which the lights go out was also cut] Childs and Palmer are paired off together, and in the course of their search they check out the greenhouse where they have a stash of weed. They find out that the greenhouse's roof has been mysteriously ripped away, causing the marijuana crop to go into deep freeze. 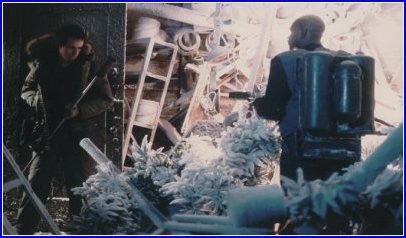 You can see the frozen pot plants in the foreground

Notice the door behind Palmer's back. As Palmer and Childs debate about what to do with this new problem, the door begins to swing shut. To their horror, the men discover Fuchs has been impaled to the door's backside by an unknown assailant: 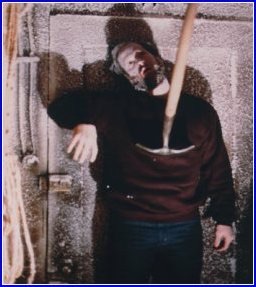 I'm not sure where the burned stuff came from, but I'll try to find some more information on that part of the question. I would speculate that one of the previously assimilated Things burned its clothes, since we learn earlier in the movie that assimilation destroys the victim's clothing.

Answer from IMDbs FAQ page for The Thing:

As with pretty much every other question, we don't know. In his final scenes, Fuchs chases a shadow when the lights in the lab blow out and he runs outside where he discovers a torn piece of clothing on the ground with MacReady's name sewn on it. Later, MacReady, Windows, and Nauls find his body in the snow where he is dead and his body is burned to a crisp. Whether or not he burned himself or the Thing burned him is hard to say. It is possible that he burns himself upon learning that MacReady could be a Thing after discovering the ripped jacket. He could have burned himself if the Thing had come to attack him. The Thing could have burned him just as a way of getting rid of him. After discovering Fuchs' dead body, MacReady and Nauls head up to MacReady's shack to look around when they see the lights on inside after MacReady had claimed to have turned them off when he left the shack a day ago. Nauls returns alone claiming to have found a torn jacket with MacReady's named on it stuffed in MacReady's oil furnace in the shack (the same torn piece of clothing that Fuchs found on the ground just before his death).

(1) Fuchs burned himself after discovering MacReady may be infected. Fuchs may have done this out of fear and confusion. Perhaps the Thing was setting him up as the person who was supposed to expose MacReady. If Fuchs had burned himself, it would explain why the Thing had to re-plant the evidence (the torn piece of clothing with MacReady's name stamped on it) in Mac's shack.

(2) Fuchs killed himself by setting himself on fire with the lighted flare he had after a near-attack from the Thing who either followed him outside or was already outside waiting for him. The Thing may have tried to attack Fuchs, and in response Fuchs killed himself to prevent that from happening. This would also explain the evidence being re-planted. An intriguing variation on this theory is that Fuchs realized he himself was being taken over. It's been shown earlier that when a Thing is discovered, it will reveal itself and try to take action, so why would a self-realization not trigger the same reaction. The logic here is that Fuchs somehow realized he had been taken over or at least deduced some reason why there was a good chance of him being taken over. Then either the part of him already assimilated opted to change tactics to "hostile takeover" (similar to what happened to Bennings) or he simply decided to keep the process from being completed. Either way, he stopped it the only way he could, by lighting himself on fire.

(3) Fuchs was murdered. The Thing may have killed Fuchs to make sure that there were no scientific minds capable of forming a test, as Blair was locked up and Copper had been drugged. It would have been easy to do; Fuchs was holding a lit flare, so dousing him in fuel would have probably done it. But possibility #3 (this) leads to another unanswered question; why not assimilate him? Fuchs was gone for an extended period of time, and it would have made the men very suspicious. It is important to note that a scene, though never released, details Fuchs as being impaled by a shovel, which would suggest one of the Things killed him. Another possibility is that Norris and Palmer (who were later revealed to be the Things) are seen with flamethrowers. It is possible that one of them got a hold of Mac's jacket and after ripping it he planned on placing it somewhere to frame Mac. But after Fuchs saw him (his shadow), he quickly threw Mac's jacket on the snow, maybe to lure Fuchs out on the open so he could have better shot at killing him with flamethrower.

(4) Fuchs accidentally burned himself to death while attempting to fight a Thing.