Was the Thing trapped in its current form until assimilating another, or could it retake the form of previous assimilations?

In the 1982 film The Thing, was the creature trapped in its current form until it could assimilate another, or could it retake the form of previous assimilations?

Short answer: According to the original script for the prequel, the Thing can revert to previous iterations of itself at any time.

This would have been made clear in the ending of the prequel as it was originally scripted, although the ending was changed for budgetary reasons.

In the script, the Thing had been part of the spaceship's cargo, but it broke loose, assimilated most of the crew, and the last remaining crew member chose to crash the ship in the hope of killing the Thing. It didn't work, of course, and the Thing survived the crash.

The aliens who had built and manned the spaceship were referred to (by the cast and crew) as the "alien pilots". At the end of the film, as it was originally scripted, one piece of the Thing tried to escape in the spaceship, but was stopped by two of the Norwegian team members. The spaceship could only be operated by a creature anatomically similar to the alien pilots, so the Thing reverted to its alien pilot form, which looked like this: 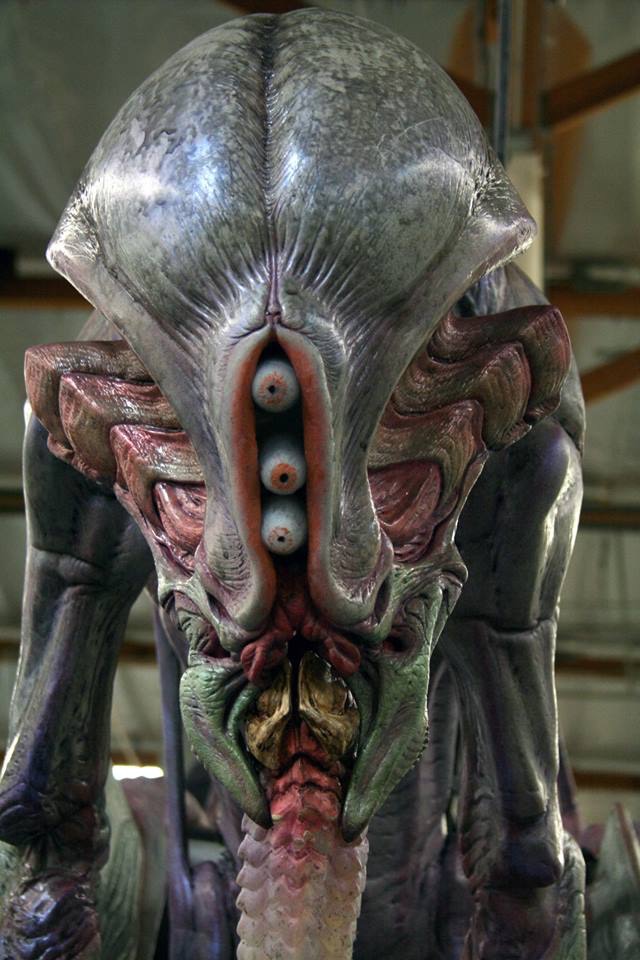 During the final battle with the Thing, this alien-pilot-Thing would have partially reverted to other previous iterations of itself, including some of the men from the Norwegian team who had already been killed and assimilated.

You can also see several previous iterations of the Dog-Thing within the last Thing of the movie, Blair-Thing. Blair's deformed face is at the top of the monster, weird legs,arms, tentacles, and claws are all over the place, and, circled in green in this photo, a Dog-Thing's head is poking out of the middle. All of these elements are relics of previous iterations of the Thing. 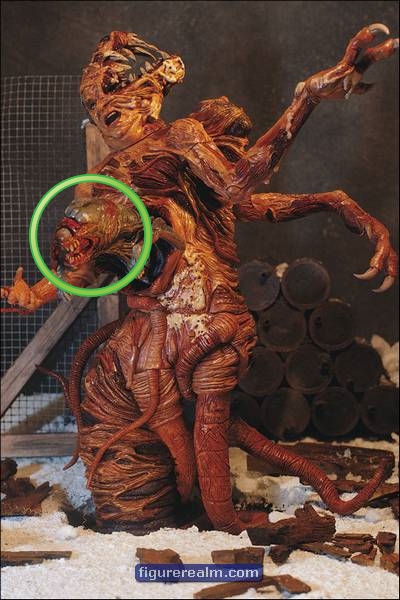 And we might not know for sure that these are aspects of a previous iteration of the Thing, but the tentacles and spikes that the Kennel-Thing produces are certainly not dog-like in any way.

I just came across this article, which includes a quote from the genius behind the special effects in The Thing, Rob Bottin:

Rob Bottin, who designed them (with a little help from Stan Winston) told Cinefantastique: "Since the Thing has been all over the galaxy, it could call upon anything it needed whenever it needed it." Hence the surreal cornucopia of dogs' faces erupting into giant cauliflowers, heads sprouting spider-legs and stomachs splitting into giant mouths that bite people's arms off.

If you consider the short story Who Goes There? by John W. Campbell, on which the film is based, to be canonical, then yes, the creatures can change when threatened (and I assume, at will):

Kinner - or what had been Kinner - lay on the floor; cut half in two by the great knife McReady had had. The meteorologist stood against the wall, the knife dripping red in his hand. Van Wall was stirring vaguely on the floor, moaning, his hand half-consciously rubbing at his jaw. Barclay an unutterably savage gleam in his eyes, was methodically leaning on the pronged weapon in his hand, jabbing, jabbing.

Kinner's arms had developed a queer, scaly fur, and the flesh had twisted. The fingers had shortened, the hand rounded, the fingernails become three-inch long things of dull red horn, keened to steel-hard razor-sharp talons.

McReady raised his head, looked at the knife in his hand and dropped it. "Well, whoever did it can speak up now. He was an inhuman murderer at that -in that he murdered an inhuman. I swear by all that's holy, Kinner was a lifeless corpse on the floor here when we arrived. But when it found we were going to jab it with the power - it changed."

This is distinct from description of the alien killed at the end of the story, implying that the alien can at least change into different forms:

Like a blue-rubber ball, a Thing bounced up. One of its four tentaclelike arms looped out like a striking snake. In a seven-tentacled hand a six-inch pencil of winking, shining metal glinted and swung upward to face them. Its line-thin lips twitched back from snake-fangs in a grin of hate, red eyes blazing.

Not the answer you're looking for? Browse other questions tagged aliens biology the-thing-1982 or ask your own question.

27
Ending of John Carpenter's The Thing
10
Radio operator's throat in The Thing (1982) and The Thing (2011)
3
Is The Thing biologically compelled to infect other worlds?
6
Infection by dead Things
15
Why didn't The Thing (1982) fare better at the box office?
26
Do we ever see The Thing's original form?
6
Does The Thing learn from its victims?
5
How did the dog-Thing know where to run when it fled the Norwegian base?
6
The Thing and its mimicry