What I vaguely remember:

They have or find some great spaceship which has a drive or power system involving solar sails.

If I remember correctly the ship was long, narrow, generic whitish grey in color with blue glowing outlines in places. On top it had 3 "sails" folded down. I think sails were down for sublight and up for whatever warp or FTL travel this series had. I don't mean like a rocket ship or 50's style sci-fi. This probably had a rounded front and rounded edges. The ship seemed awfully big for the size of crew it had (only 4-5? unless I'm missing many memories)

These sails did not fold out like sails on a boat. They swung up, stood tall, and were only as wide as the ship. They were thick solid grey/white material like the rest of the ship, also with glowing blue outlines. There is a point in the story where the sails are jammed/locked in the sublight position or in between and their enemy is catching up to capture the kids whose parents probably did something important before they were captured, killed, or whatever happened to them.

Apart from the ship the biggest point that stands out is the teleportation used.

When they need to use said teleporter one of the characters asks about (something like star trek beaming technology?) and I think one of the flat adult characters says something about that having been too dangerous and having been outlawed. Instead they use some kind of ... (tesseract?) don't remember what they called it.. but how it worked was:

Apart from a memorable looking spaceship and approach to teleportation that was unusual for the time, the show seemed quite flat and the good characters seemed excessively and idealistically good. "We'll automatically do anything for each other because the writers wrote it in the script!" kind of tone.

I have scoured lists of 90's sci-fi TV pilots on IMDB and YouTube and tried Google image searches for the ship but never found anything.

The pilot (or what I saw) probably featured 2 large space craft and I don't recall any shuttles or fighters.

Almost certainly had scenes of one or two spaceships near a planet.

And obviously this was a long time ago so I could be off on some details.

Aired in English. I don't recall seeing any aliens in the story. If there were they were likely the humanoid kind.

It may be The Osiris Chronicles, aka Warlord: Battle for the Galaxy. There isn't much footage available of it, but here's a photo of the ship: 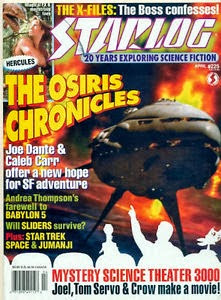 The Wikipedia entry gives a brief synopsis which mentions a space-folding teleportation method.

Hypnosifl was able to find this footage from the German airing of the pilot which shows some more footage of the ship in motion with the sails out (thanks!).

Could it be Escape From Jupiter? In a comment Mark mentioned remembering Ganymede or Io, and Escape From Jupiter involves a mining colony on Io which faces disaster after a volcanic eruption, the surviving colonists escape on an old station, and the plot description says "Michael hits the computer and the station begins whirring to life. The station's magnificent solar sails open up to absorb the sunlight from the sun and to also restart the power and life systems." The description doesn't mention any teleportation though, it's possible this is the show Mark was remembering but not the one you were remembering.

Here's a trailer, see if it looks familiar: