Who invented Star Trek sideburns and why? 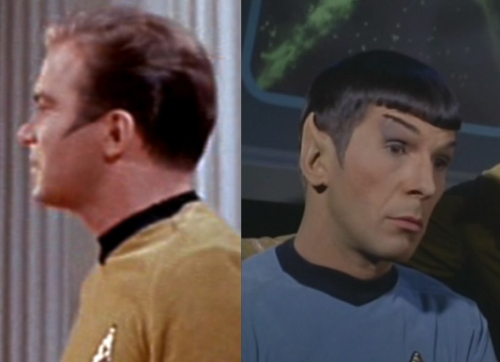 Clearly a production decision was made in the 60s. What's the history of this?

(Related question: Is there any in-universe explanation or reference to why pointy sideburns persisted for so long?)

There is a section on this in "The Making of Star Trek", by Stephen E. Whitfield.

According to the story, the producers (that was basically Gene Roddenberry) wanted 'futuristic' hairstyles. However the actors pointed out that they had to live in the real world, and weren't going to spend their off days looking like freaks from the future. The pointed sideburn was the compromise.

In Leonard Nimoy's autobiography I am Spock, near the end of Chapter 2, Nimoy claims that he had the idea for Spock alone to have the pointy sideburns, but that they later gave them to everyone.

An interesting sidebar: I had suggested pointed sideburns as a specifically Vulcan look for Spock. Apparently Vulcans are intergalactic trendsetters, because you'll notice everybody in the Federation now sports those pointed sideburns.

This does suggest that pointed sideburns were Nimoy's idea, but this could still be in-line with Gustav Mendoza's claim that his father Richard Mendoza came up with the style for Spock, and Nimoy approved and suggested it be just for Vulcans. Or possibly they came up with the idea together.

Gustav does say that Richard came up with it for Spock, not the entire crew who later sported it, so that part is now from two sources.

Gustav Hernandez claims that his father, Richard Hernandez, a hairdresser for Lucile Ball (and one of the first male Hollywood hairdressers), designed the pointed sideburns for Spock.

Laurel Goodwin, who played Yeoman Colt in ST:TOS "The Cage", said in an interview that she came up with the pointed sideburns for Nimoy — her friend and former drama coach:

The thing that took the thorn out of my paw really was Leonard, because I was so pleased for him, and I knew this was going to give him some liquidation, that he could then do what he really wanted to do. And I was very pleased with all of that. And I had come up with the pointed sideburns. And a few other things. But that, very specifically.

[Interviewer] You suggested that?

Oh, yeah. When I was in makeup, Leonard's going, "You know, I’ve got to play this non-feeling alien, and all that." I said, "Honey, trust me. When they get these ears right and they get that right, we get that look just right, you're gonna be the sex symbol of the '60s." He brushed it off because he was a serious actor. So, even though I was crushed not to be on the show, I was delighted for Leonard. And, when the show started, not being sour grapes, I took a look at it. The first moment that William Shatner walks on, I go, "He's got Leonard's pointed sideburns." That did it. I turned it off and never watched it again.

8
Is there any in-universe explanation or reference to why pointy sideburns persisted for so long?
2
What was the original description and backstory for the character of Data?