How much would a ticket to Jurassic World cost?

Do we know the price of a standard ticket to Jurassic World?

I can't remember if it's ever mentioned in any of the films. 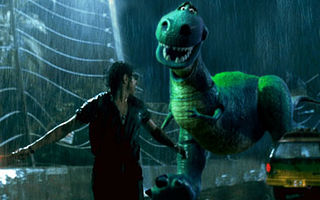 TL;DR: We don't know for sure, but you're definitely looking at something $800 and up.

The ticket prices themselves are not mentioned in dialogue, but it's possible that someone will find a screenshot from the movie itself. In the meantime, let's speculate using something comparable from the real world.

According to the official Jurassic World website, a Standard Package includes the following:

Unfortunately, the official site doesn't include any faux pricing information - all of the "Buy Tickets" and "Book Now" links instead take you to a place for buying tickets to the movie.

For something comparable, we can look at either SeaWorld - a similar venue revolving around a combination of live animals & amusement park rides, or we can look at Disney World - a massive entertainment complex with on-site hotels & rides. For each comparison, I'll choose the nearest equivalent I can find to Jurassic World's standard package listed above.

SeaWorld doesn't have daily passes listed on their site, only annual memberships. However, at SeaWorld (Orlando) a standard Adult ticket will cost $87.00. Three of those, one for each day, will set you back $261.00 plus tax. All other costs - travel, hotel, etc. - are not included, but most area hotels would cost around $100/night or more. For 2015, SeaWorld is offering a new thing called a FlexTicket, which gives a single adult unlimited visits to the park for 14 days after the ticket purchase. A FlexTicket will cost you $335.95 plus tax.

For a better example of the "package deal" including a hotel room, let's look at Disney World. A basic Disney Magic Package is fairly close to the Jurassic World one. It starts at $889 and includes a 3-day pass for a family of three. The package includes a standard hotel room, park access, and discounted dining throughout the park. The slightly nicer package starts at $1300.

GENNARO: And we can charge anything we want! Two thousand a day, ten thousand a day - people will pay it! And then there's the merchandising...

HAMMOND: Donald, this park was not built to cater only to the super rich. Everyone in the world's got a right to enjoy these animals.

GENNARO: Sure, sure... they will. (laughing) We'll have a... coupon day or something.

Although Hammond himself is no longer alive by the time of Jurassic World's opening, and in fact, InGen has been purchased by Masrani Global, it's still entirely possible that his wishes were respected after the events of the second movie. This idea is supported by his having a prominent memorial statue at Jurassic World, in addition to the main facility being named after him.

*Note: This only pertains to the movie version. In the book, it was Hammond himself - a much less benevolent version - who stated they could charge any amount they wanted.

To summarize: To find a reasonable expected price for the standard Jurassic World package, we looked at two of its real-world competitors - SeaWorld and Disney World. Obviously, some mark-up is required since Jurassic World would be the ONLY place on Earth where you could see live dinosaurs in person.

That said, I estimate that ticket prices to Jurassic World should start somewhere between $800 - $1600. This assumes a comparable package that would accommodate 1-3 people and be, at minimum, access to the park & dinosaurs. Needless to say, it can only go up from there. In fact, several sources have calculated the operating expenses for a real-life Jurassic World and tried to guess the ticket price based on that. This video estimates a ticket cost of over $7000, while I've seen other sites estimate anywhere between $2500 - $5000 for a single day's ticket.

The only canon info I can think of is the discussion in Jurassic Park, in which Gennaro suggests incredibly high prices ($2,000-10,000 per day) and Hammond objects, saying that he doesn't want only the super-rich to be able to afford it. They share a laugh over the idea of a "coupon day," without either side settling on a practical price.

Of course, this was for the original park, but it seems reasonable that the subsequent Jurassic World would aim for a similar price bracket as the original.

However, judging by the extras used to play park visitors in Jurassic World, who appear to be broadly middle class, the prices weren't prohibitive. It would no doubt be expensive, especially when you factor in a flight to Costa Rica, lodging, food, etc, but it seems to have been accessible to a broad cross-section of first-world tourists.

Given the heavy references to parks like Disney World, I think a reasonable assumption would be that the price scheme was similar to that type of park, with the usual "season pass" options, and then of course the wide variety of hidden fees and tourist traps where people could spend more money than they intended to.

But overall, the price of admission seems to be similar to other major theme parks, based on the crowd size/makeup, and the out-of-universe influences in its portrayal.

Not 100% sure that the given answers quote from the actual novel or from the movie but the following passage is from the novelisation which does suggest there's a hefty price tag on a per-day basis:

"Now," Hammond said, "think how different it is when you're making entertainment, Nobody needs entertainment. That's not a matter for government intervention. If I charge five thousand dollars a day for my park, who is going to stop me? After all, nobody needs to come here. And, far from being highway robbery, a costly price tag actually increases the appeal of the park. A visit becomes a status symbol, and all Americans love that. So do the Japanese, and of course they have far more money."

While it may be considered a good idea to make a comparaison with parks like Disney World and Seaword; there are a number of factors that will shot the prices sky high:

1- They are on an island, where the costs of everything you need to build and maintain your park are higher.

2- You have to pay for the scientific research needed for re-creating the dinosaurs (this should be at least a few hundreds of millions of dollards).

3- The physical accommodations, food and personal required for keeping, feeding and caring the dinosaurs are much, much biggers than for a standard zoo. Just think about the size of the fence required for a T.Rex or the food that he will need in a place where there is no natural prey for him to feed on.

4- For many of these attractions, there are relatively few people that are able to make a visit each day. It's not like Disney World where there are scores of people just about everywhere.

5- The competition for getting one of the few available tickets should be fierce. People can pay up to a few thousands just to watch a single SuperBowl, a Stanley Cup match or to assist a F1 Grand Prix race. For example, the VIP section for the Monaco Grand Prix starts at 1600 Euros and go up to 2500 Euros (http://www.monaco-grand-prix.com/2542-monaco-f1/).

In the case for the Jurassic World, the competition would be world wide and not just limited to the Americans like it would be for the SuperBowl.

An interesting point of comparaison would be the cost of a flight on the Virgin Galactic's SpaceShip; which was set at $200 000 for the first 580 people to sign up but has now been bumped up to $250 000 for the next 500 people.

The most expensive golf course costs 250 millions to build and has an annual membership fee of $500 000 plus annual dues. Just this big, enormous electrical fence around the T.Rex should cost at least that amount (and probably much more; depending on its exact length, which looks like to be a few kilometers).

Taking all this into account, I don't think that the $2,000 to $10,000 per day (which roughly translates to $4,000 to $20,000 today after inflation) as suggested in the original Jurassik Park should be considered as off limit and in fact, even at these prices, I don't see how they could make it without going into bankruptcy.