Has the Joker ever been inside the Batcave?

I was about to ask why there is a giant penny and a dinosaur in the Batcave, but both of those questions have been answered already. The other question I had regarding the Batcave is this: I know that several villains, including Bane and Catwoman, have been inside the cave, but I don't remember ever reading that Batman's archenemy, the Joker, has also gotten into the Batcave. Has he?

TL;DR, Probably not in the comics

At the end of the "Death of the Family" arc, The Joker establishes an elaborate set-piece in the caves outside of the Bat Cave, and implies that he followed Batman back a long time ago.

In Batman #17, Joker hosts a mock dinner in the caves leading to the Batcave. Batman and his allies have been bound and doused in gasoline, with Joker warning against escaping at the risk of agitating the flint in the cave; everyone in the Bat-family save for Batman have also been bandaged. A brainwashed Alfred serves them with a cloche seemingly containing their own severed faces. When Joker threatens to ignite the gasoline, Batman escapes and triggers a blaze, but uses an explosive and his knowledge of the cave system to blow its roof open, allowing water to rush in from above and douse the flames. When he frees the others and they take their bandages off, it is revealed that they still have their faces — the whole scene was a sick ploy by Joker.

Batman pursues Joker to the edge of a large drop. Batman claims that he knows Joker's true identity, but to prevent him from saying it, Joker purposefully knocks himself over the edge and falls out of sight; Batman finds a notebook which Joker claimed held the secret identities of the Bat-family, but discovers it is blank. Meanwhile, the Bat-family are gassed into attacking each other, but manage to fight off the gas' influence. Later, in Wayne Manor, Batman tells a recovering Alfred that after finding the joker playing card in the cave, he confronted Joker about it in Arkham Aslyum as Bruce Wayne. Joker failed to acknowledge him and Batman realized that he did not care who Batman was under his mask.

Just to make it clear, the writer has since stated that Batman "has physical evidence that The Joker couldn't have been in the cave ... he's positive that this didn't happen".

Looking around at bit, I found some occurrences in which he was inside the Batcave.

A comic spin-off of Batman Animated series. The Joker killed the son of a rich philanthropist, who decided to put a bounty of 50 millions dollars on his head. Under those conditions, it was out of question to send him to Arkham Asylum, because everyone would be out to collect the bounty. So Batman decided to have him kept in the Batcave while he deals with the situation. 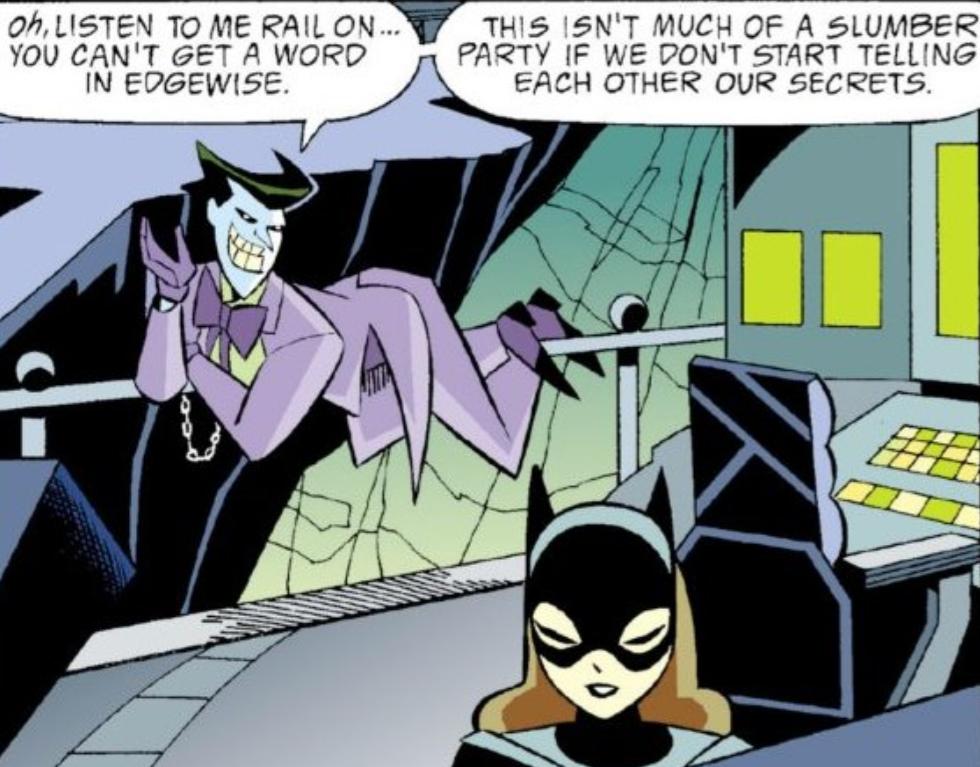 Apparently, he managed to get in the Batcave by swimming. 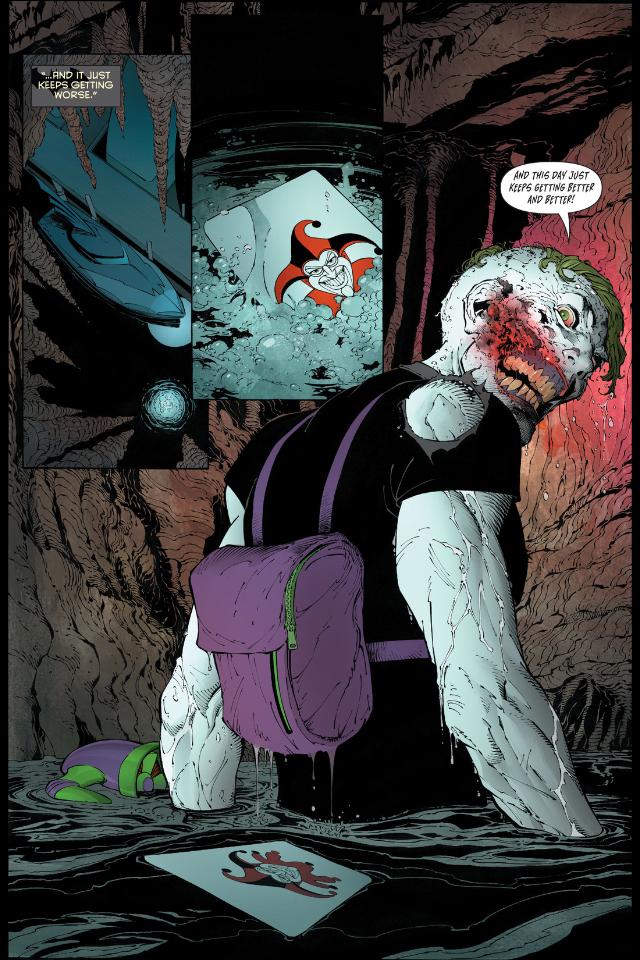 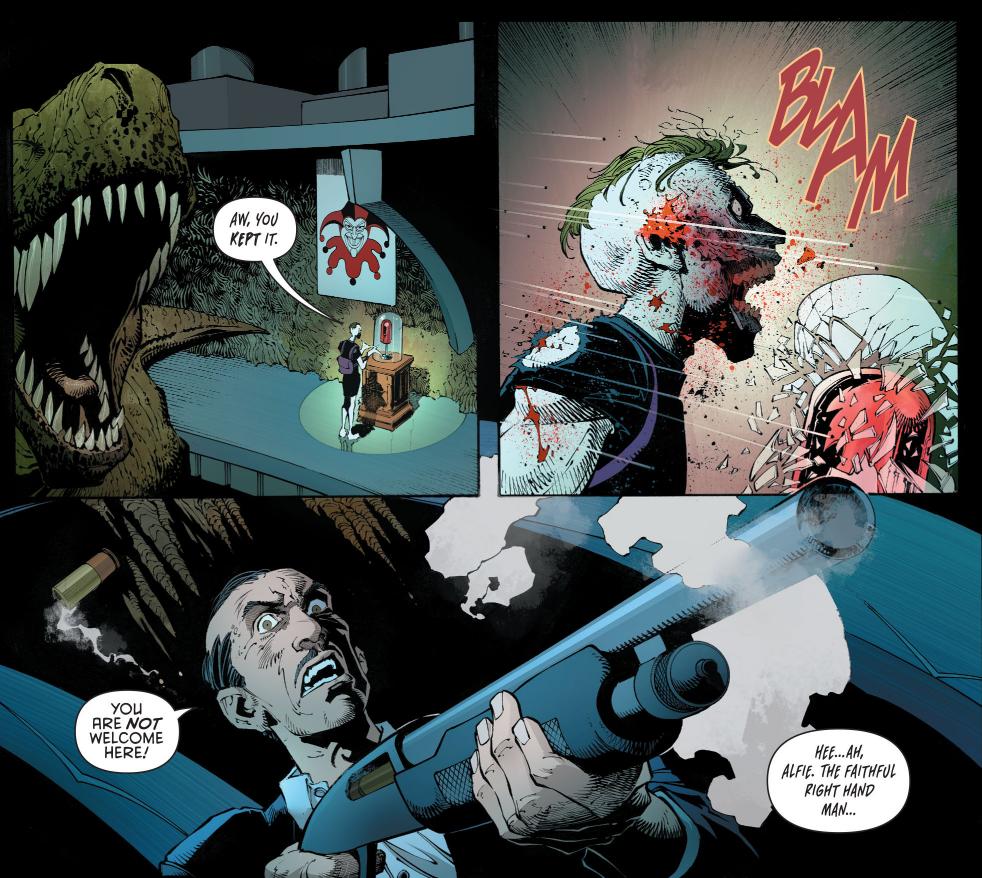 He walks in from the main entrance to say hello to his dear friend Batman.

Later on, it is revealed that the real Joker died, and he managed to take over Tim Drake, the second Robin of this universe, which explains why he knew the entrance, although early on the real Joker also tortured Tim into telling all the secrets he knew.

As a short answer, there is at least once that the Joker has been inside the Bat Cave that I can recall. A semi recent cartoon movie, The Batman: Dracula, set in the The Batman cartoon universe, has the Joker, a ghoul almost full vampire convert of the titular and historical Vladimir the Impaler Dracula, locked up by Batman in a cell in the Bat Cave. He doesn't have the run of the place, but in it he is.

The Joker got inside the batcave once during the Adam West Batman series, and almost got there a second time. During "The Penguin Declines" (season 2, episode 39), The Joker, Penguin, and several henchmen gain access to the batcave by hiding in the trunk of the batmobile.

The fight scene in the batcave:

Someone's review of the episode, with more footage of the scene:

Later in "Flop Goes The Joker" (season 2, episode 58), The Joker forces his way into Stately Wayne Manor with the intention of robbing Bruce Wayne. After tangling with Alfred, he finds himself in Bruce Wayne's study, accidentally finds the batpoles, and slides down one of them. Due to a combination of circumstances, he doesn't actually reach the batcave and doesn't connect Wayne to Batman.

The Joker at Stately Wayne Manor:

That same guy's review of the episode:

3
How many (super)villains have managed to get into the Batcave?

18
Has there ever been a female character using the Batman name?
35
Has Batman himself ever taken seriously the idea that he indirectly causes Gotham to have more supervillains?
14
Has anyone ever been subjected to Joker Venom and Fear Gas simultaneously?
21
Has Batman ever teamed up with Joker?
5
Has Catwoman been to the Batcave before New 52?
10
Has Batman's equipment ever become faulty from being stored in the Batcave?
49
Has Batman ever said he hates the Joker?
11
Has Batman ever been the dictator?
8
Has Batman ever died and been resurrected?