Based on John Carpenter's 1982 film The Thing and its 2011 prequel (also titled The Thing), is it possible for someone to get infected by a dead Thing?

It isn't clear. We don't seem to witness anything like this happening on screen, in my opinion, although there are some fans who say otherwise.

It is impossible to talk about this fan theory without making reference to the extremely contentious issue of when Blair was infected/assimilated. Both John Carpenter and producer Stuart Cohen insist that neither they, nor anyone else, know when any of the off-screen assimilations took place, but Cohen has suggested that, in his own opinion as a fan (but not as the producer), he thinks Blair was assimilated sometime between the autopsy on the two headed (popularly known as "split face") Thing and his freak out in the radio room. This fan theory conforms to this general time frame.

According to this particular fan theory, which is just one of many such theories regarding the question of when Blair was infected, Blair inadvertently infected himself during the autopsy. From the fan site Outpost 31's discussion thread on the issue of Blair's infection: 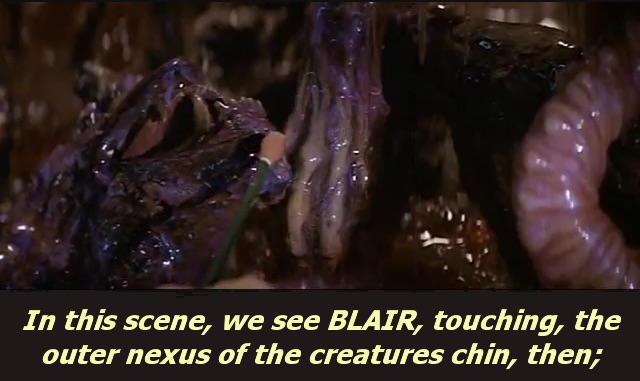 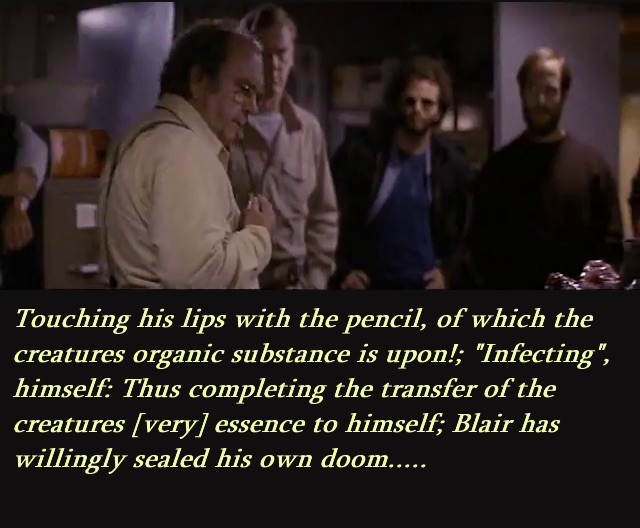 If this theory is correct, and if split face was really dead, then it appears that a dead Thing can infect a person.

As I was writing this, it occurred to me that the Blair pencil theory isn't necessary to prove that a dead Thing can infect a person. All we need to know is whether the split face Thing was actually dead, because Bennings was unquestionably infected by split face - or at least by the slimy tentacle dripping off of split face.

When split face, covered in a sheet after the autopsy, is moved into the storage room, Bennings and Windows go into the room to collect their gear and move it. Windows leaves to get the Garry's keys, and we see a slimy tentacle emerging from under the sheet.

When Windows returns, he sees this:

Bennings is in the process of being assimilated. Windows is naturally terrified, and runs out of the room. He alerts the others, but by the time they reach the storage room, the window is broken and Bennings-Thing is gone. They run outside and spot the Thing, surround it, and it produces what might be the most incredible sound ever heard in a movie:

So, if split face was truly dead when MacReady and Copper found it, then it is almost certain that a dead Thing is still infectious. The problem with this idea is that, after the team discovers that Bennings has been infected, they seem to assume that split face wasn't as dead as they had previously believed, so they drag it outside and burn it.

In the absence of definitive information about the status of split face at the time of Bennings' assimilation, this argument is completely conjectural in nature, and the most we can infer from Bennings' fate is that a Thing which appears to be dead can still be infectious.

If we rely on the Blair theory, the problem is compounded: we still don't know whether split face was really dead, and on top of that, we don't know if this was really the moment when Blair was infected.

However, I don't see how anyone could argue that split face was truly dead, in light of the fact that it extended a tentacle and grabbed Bennings. This leaves us right where we started - we just don't have enough information to answer the question either way.

In short, we simply don't know.

Not the answer you're looking for? Browse other questions tagged aliens biology the-thing-1982 the-thing-2011 or ask your own question.