Who controls the Watcher in the Water?

In the Lord of the Rings: The Fellowship of the Ring, there is a kraken-like creature found in lake front of the gates of Moria, both mentioned in the book and shown in the movies.

What I want to know is, who controls it? Is it an independent creature, or is it controlled by Sauron, or maybe by the Balrog of Moria? 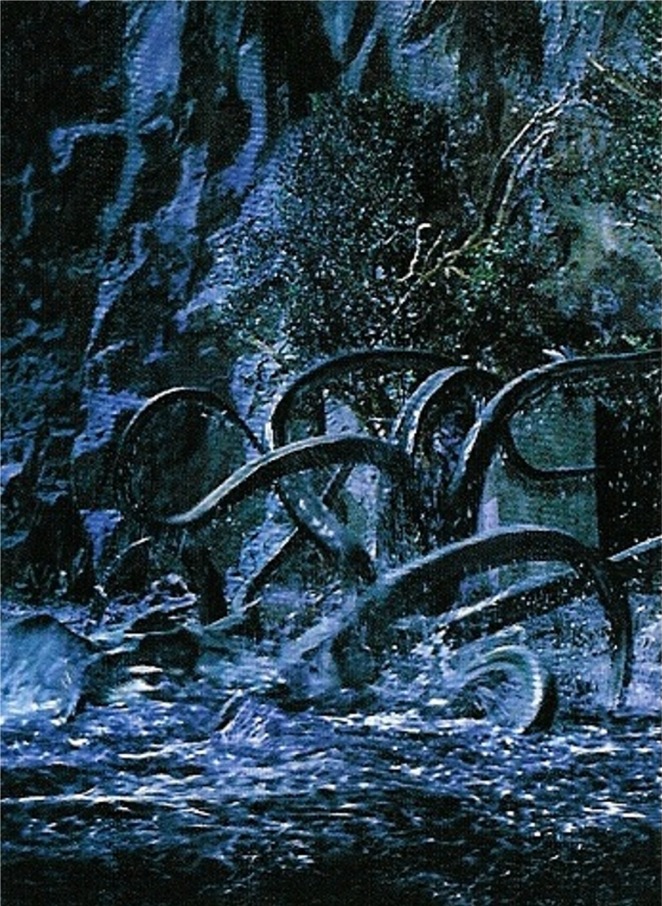 In my opinion, It is independent of Sauron.

When asked what the watcher is, Gandalf says[tFotR, A Journey in the Dark, p.403 of 50th anniversary edition]

There are older and fouler things than Orcs in the deep places of the world.

And later, when describing his battle with the Balrog in the deeps he says[tTT, The White Rider, p.654]

The world is gnawed by nameless things. Even Sauron knows them not. They are older than he. Now I have walked there, but I will bring no report to darken the light of day.

There is no indication that Sauron controls or even has knowledge of the watcher. It could be a similar situation to Shelob, and he knows it's there and leaves it as it is useful.

There is no suggestion in the book that it is controlled by anyone. All Gandalf says about it is:

Something has crept, or has been driven out of dark waters under the mountains. There are older and fouler things than Orcs in the deep places of the world.
(Source: The Lord of the Rings, The Fellowship of the Ring, chapter 4 "A Journey in the Dark")

Well, we just don't know. However, what always made me curious is how the quote goes on:

‘Something has crept, or has been driven out of dark waters under the mountains. There are older and fouler things than Orcs in the deep places of the world.’ He did not speak aloud his thought that whatever it was that dwelt in the lake, it had seized on Frodo first among all the Company.

This indicates quite strongly that the Watcher was specifically picking the ringbearer. But I somehow don't think that those “old nameless things” would by themselves sense and fancy the ring as much as men, elves, orcs do. Saruman is the only Maia who succumbs to it, but he is IMO a special case (Maia of Aulë like Sauron, and so on). The other examples of ancient beings don't care much about the Ring:

I think that, if the Watcher is such an ancient creature, the only reason it would immediately grab Frodo with Ring is on Sauron's account (if not the Balrog's or – unlikely – Saruman's). Perhaps we can't say Sauron controls it, but I believe that he has at least some influence on it.

There are a few hints in Tolkien's books that the watcher in the water was under Sauron's control. Firstly, the following lines from The Silmarillion, "Of the Rings of Power": "Now Sauron's lust and pride increased and he determined to make himself master of all things in Middle Earth, and he gathered again under his government all the evil things of the days of Morgoth that remained on earth or beneath it".Call me crazy but im pretty sure that the watcher in the water would be classed as an evil thing.I also believe it was alive or perhaps the spawn of a creature that existed when Morgoth had dominion of Middle Earth.Gandalf himself says the creature is old.

Secondly we have Gandalf, who suspects the creatures motives, Gandalf is the wisest of all the Maia who's instincts and suspicions usually turn out to be correct. An excellent example of this is when his instincts warned him for no apparent reason to keep the ring's whereabouts hidden from Saruman.

The final hint that Sauron may have controlled the watcher in the water can be found in Appendix B LOTR "The Return of the king" - "2480 Orcs make strongholds in the Misty Mountains, Sauron begins to people Moria with his creatures".

No, there is no suggestion that anyone controls the Watcher. By all (known to me) accounts, it is an independant creature, perhaps possessing enough intelligence to feel the addictive power of the One Ring.

One speculation I can think of is that the Watcher was one of the monsters "created" by the first Dark Lord Morgoth in the First Age (along with trolls and dragons), and that the Watcher follows his instinct or deeply-buried purpose to guard the realm inhabited by orcs and the Balrog.

Not the answer you're looking for? Browse other questions tagged tolkiens-legendarium the-lord-of-the-rings magical-creatures or ask your own question.

38
Why was the balrog so mad?
42
Do Balrogs Have Wings?
68
What would have happened if the Balrog of Moria had taken possession of The One Ring?
56
Why did Gandalf chase the Balrog down?
18
Was Pippin responsible for Gandalf's death?
11
Why didn't Durin's Bane kill the Orcs?
29
Why is Galadriel always barefoot?
4
What other demon types exist in The Lord of the Rings canon?
22
What happened to the Book of Mazarbul?
65
Was Gandalf “meant” to confront the Balrog?