Did Khan disapprove of Spock in an early draft of "Space Seed"?

A few years ago, an acquaintance had informed me that in an early draft of "Space Seed" there was a scene in which Khan had expressed disapproval toward Spock's existence. Purportedly, Khan had abhorred the fact that Spock is half human and half Vulcan and hence "impure". According to my acquaintance, Khan openly expressed his displeasure of the fact that, while humans have developed great technologies that have opened up the galaxy for them, they have interbred with other species instead of maintaining pure bloodlines.

Some of these views may have been espoused in the dinner scene where Khan and Spock argue over the Eugenics Wars: 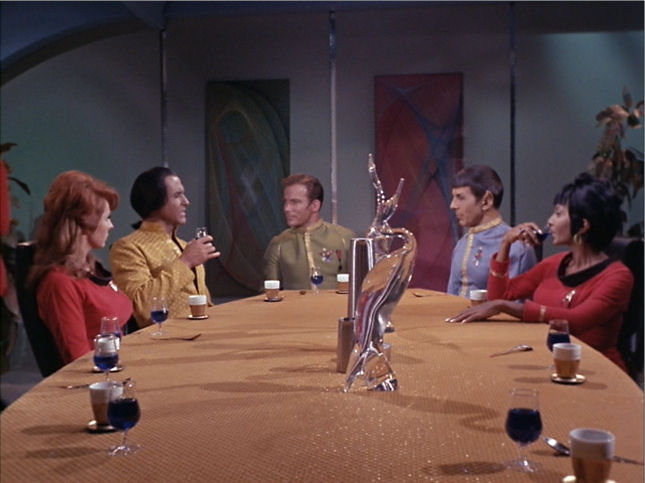 At the time that we spoke of this, my acquaintance did not have a copy of this draft or access to any source confirming its existence. I did already know that, in at least one early draft, Khan was supposed to be a Nordic general named "Ragnar Thorwald". However, I have not come across anything indicating Khan's specific disapproval toward Spock.

Is it true that Khan openly disapproved of Spock's dual ancestry in at least one draft of "Space Seed"? If so, why exactly was it removed prior to the final script?

Curiously, in the actual episode, Khan does not even ask about Spock's appearance or question whether he is human or an alien, and the term "Vulcan" is never uttered in the episode even though Khan has never encountered an alien before (see transcript). Khan might have read about Vulcans and other aliens in the various reading materials he absorbed while in Sickbay. However, it seems unnatural that the fact that Spock is not human fails to come up when he and Khan first meet at the dinner. While such discussion could have occurred off-screen, it does seem that something has been excised from the script.

TL;DR: Yes, Roddenberry originally liked the idea but didn't use it for unknown reasons.

The Gene Roddenberry Archives include, among other things, his original handwritten notes for the Space Seed script. Roddenberry personally touched up the December 7th, 1967 script written by Gene Coon, and had written down several ideas he had for improving the script.

At this time, the character in Coon's script was still called Ragnar Thorwald:

It will be Roddenberry who fixes the final version of "Space Seed" without credit. Handwritten notes show that Roddenberry had some interesting ideas he wanted to add to the script that unfortunately were not included in the final result.

One that is especially intriguing is the idea that Khan would have a problem with Spock because interspecies mating "might sully the human race." This would have been an especially fascinating theme in "Space Seed" if it had been used, especially considering it is Spock who ultimately defeats Khan’s plans in Nicholas Meyer’s Star Trek II: The Wrath of Khan.

In these handwritten notes is the name "Khan," an ethnicity change which was the result of the brilliant casting of Ricardo Montalban, and the words "Sikh” and "genetically purebred."

This and other trivia is discussed in the article "The Evolution of Space Seed" on the old STARTREK.COM site.

24
What was in this missing scene from The Wrath of Khan?

30
In the 2009 movie, why was Spock's mother part of the Vulcan High Council?
15
Is there anything more to the way others mistreat Spock?
23
Can anyone identify the upper body garment Khan Noonien Singh is wearing in the Star Trek episode "Space Seed"?
7
How far did the Botany Bay travel in "Space Seed", and how?
22
Why didn’t Lt. Saavik tell Kirk to bring Spock's body to Vulcan instead of leaving it on Genesis?
33
Why couldn't Scotty beam Spock out of the radiation chamber in Wrath of Khan?
15
Are there other examples of burial with full honours in Star Trek?