How much of Rick and Morty is improvised?

In the Rick and Morty episode "Rixty Minutes", Rick points out that a lot of the commercials and TV shows from alternate realities have an improvisational feel to them. He isn't wrong, but the same is true of much of the dialogue that the characters of Rick and Morty say.

How much of Rick and Morty is improvised, and does that include the television shows that they view in "Rixty Minutes"?

The ending of the "Two Brothers" trailer seems to suggest that the lines are mostly improvised, as the narrator appears to be surprised by his own (so surprised that he laughs and moves off mic to remark on how ridiculous he finds what he just said), but this isn't necessarily an indication that all of the dialogue is improvised.

In fact, Justin Roiland (co-creator with Dan Harmon, and the voice of many of the characters, including Rick), says he reads Rick's lines once, then marks down where he wants to insert Rick's trademark burps, and then goes back and re-records the dialogue.

The burps are real. While doing all of Rick's dialogue for an episode I mark specific lines that I want to go back and do "burp takes" on. I have to tell the Audio Engineer (Daniel) to leave it recording. I use low calorie beer (miller 64) and water to get air into my stomach. Then wait for the burp and try to get it in the middle of a line. It's disgusting reading this explanation I just typed. This whole process is disgusting.
- Source

However, most of Justin's lines are indeed improvised, as he revealed in a question and answer session:

When doing the dialogue I have to toss the script aside. Even if I'm sticking to a very specific line of dialogue that is required for a very specific joke set up or punchline, I find that if I allow myself to adjust the wording and let it come out more naturally to how I would actually say it, it helps make the characters feel more real/alive/natural. I also LOVE using out takes as in takes. Our dialogue editor Tommy Meehan also always surprises me with stuff he'll pick from the record to cut in. He and I are very much in sync on what we find funny.

That catch phrase thing is a joke on stupid catch phrases. Seems to be a big controversy at this point. Go back and listen to when he first says it at the end of the meeseeks episode. He changes it each time he says it. Then in [the] sex robot [episode] he says he cemented it back then. It's the joke. That's the joke. It's a horrible cringe worthy catch phrase that I just made up in the record as an out take that made it's way into the show. CAN'T WAIT TO SEE IT TATOO'D ON A HOOKERS ASS!!!

[I improvise on] some episodes more than others. I usually have moments in each episode that weren't in the script. One big example is the cold open in the pilot. That whole sequence in Rick's ship was improv based on a scene suggestion from Dan. Other stuff when Rick acts strange or fucks around... that's usually improv. The scene where he plays with Morty in the Alien Scammer's ship was improv.

It is very clear that the episode you mentioned is one of the most improvised episodes so far, as can be seen in the following clips:

Note: Some guidelines for recognizing improvised material on the show: 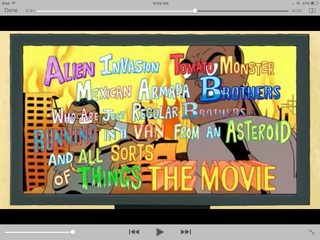 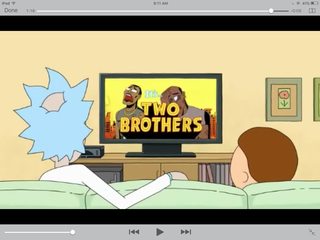 The movie title changes from:

Alien Invasion Tomato Monster Mexican Armada Brothers Who Are Just Regular Brothers Running In A Van From An Asteroid And All Kinds Of Things: The Movie

to the much simpler:

Not the answer you're looking for? Browse other questions tagged behind-the-scenes rick-and-morty or ask your own question.

25
Do any Rick and Morty materials provide information about Rick's backstory?
24
Why do the characters in Rick and Morty have asterisk-shaped pupils (*)?
10
Rick & Morty: What's the difference between 'dimension', 'timeline', and 'reality'?
2
How did the Council of Ricks find the Rick they suspected for the murders?
3
Rick and Morty: Why doesn't the solar system explode in S3E4?
7
Which is dimension C-137 in Rick and Morty?
11
Which scenes from the title sequences of Rick and Morty are from actual episodes?
17
How much creative independence are the Show runners accorded in Game of Thrones?
5
What exactly happened in the last episode of Rick and Morty season 5?