Were the Eagles of the Lords of the West real eagles or cloud eagles?

Were the "Eagles of the Lords of the West", that acted as portents of the fall of Númenor real eagles or cloud eagles? 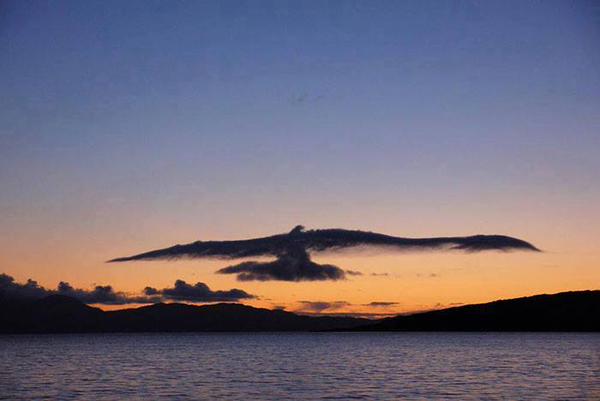 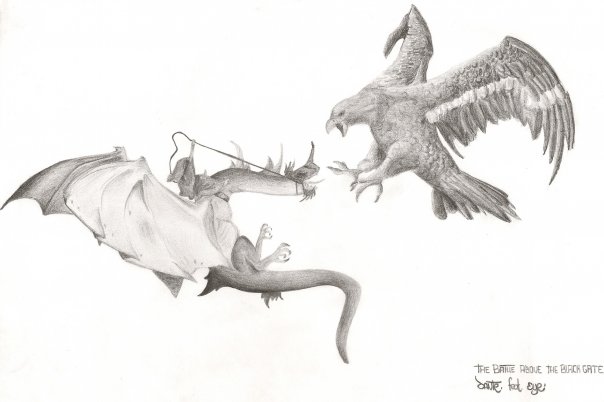 Unfortunately, we don't know for sure.

There are two references to eagles as a portent in Akallabêth. The first is unambiguously a thunder-cloud (emphasis mine):

[T]he sky itself was darkened, and there were storms of rain and hail in those days, and violent winds; and ever and anon a great ship of the Númenóreans would founder and return not to haven, though such a grief had not till then befallen them since the rising of the Star. And out of the west there would come at times a great cloud in the evening, shaped as it were an eagle, with pinions spread to the north and the south; and slowly it would loom up, blotting out the sunset, and then uttermost night would fall upon Númenor. And some of the eagles bore lightning beneath their wings, and thunder echoed between sea and cloud.

The second is less clear:

Then the Eagles of the Lords of the West came up out of the dayfall, and they were arrayed as for battle, advancing in a line the end of which diminished beyond sight; and as they came their wings spread ever wider, grasping the sky. But the West burned red behind them, and they glowed beneath, as though they were lit with a flame of great anger, so that all Númenor was illumined as with a smouldering fire; and men looked upon the faces of their fellows, and it seemed to them that they were red with wrath.

This is obviously a very ambiguous phrase, and unfortunately none of the commentary in History of Middle-earth clarifies the point. All I'm willing to say with certainty is that this reference was introduced in an early (1945ish) draft

But the Eagles of the Lords of the West came up now out of the dayfall, in a long line one behind the other, as if in array of battle, and as they came their wings spread ever wider, until they embraced the heavens.

The earlier version isn't really any more clear. In one sense it could be describing a cloud growing in size; we can imagine an eagle-shaped cloud getting larger and appearing to be coming closer with expanding wings. Plus Thorondor, the greatest of the eagles, is described as having a wingspan of 30 fathoms1 (emphasis mine):

Now, even as Fingon bent his bow, there flew down from the high airs Thorondor, King of Eagles, mightiest of all birds that have ever been, whose outstretched wings spanned thirty fathoms; and staying Fingon's hand he took him up, and bore him to the face of the rock where Maedhros hung.

While 30 fathoms is enormous for an animal, longer than most of the largest animals ever recorded in the real world, it's hard to imagine that being reasonably said to "grasp the sky", unless it was right on top of you, lending.

On the other hand, Tolkien was very careful with his capitalization and, especially in the narration, it seems odd that he would use the capitalized phrase "Eagles of the Lords of the West" to refer to anything other than the Great Eagles. In fact, the only other time this phrase is used (in the published Silmarillion, anyway) is when introducing the creation of the Eagles (emphasis mine):

But dost them not now remember, Kementári, that thy thought sang not always alone? Did not thy thought and mine meet also, so that we took wing together like great birds that soar above the clouds? That also shall come to be by the heed of Ilúvatar, and before the Children awake there shall go forth with wings like the wind the Eagles of the Lords of the West.

Ultimately there's enough leeway that it could go either way.

1 180 feet, or 55 meters, which is a little over half the length of an Association Football field and about as high as the highest of Niagara Falls.

Not the answer you're looking for? Browse other questions tagged tolkiens-legendarium or ask your own question.

49
Why Did J.R.R. Tolkien Capitalize Certain Words Throughout His Books?

6
Why didn't the eagles help out during the siege of Minas Tirith? (in the movies)
14
What is the origin of the Great Eagles?
11
Were dwarves more numerous in Rhûn than in the West?
5
Why didn't Morgoth track the Eagles to find the location of Gondolin?
14
Where does the loyalty of the eagles originate from?
52
How can a storm cloud in Middle-earth “move behind the sun”?
3
How large were the Great Eagles that carried Frodo and Sam?
4
Why didn't Sauron do anything about the Eagles?
8
Were the spiders in Mirkwood and also the Eagles rational beings?