In the movie Prometheus, we hear an exchange of dialogue which proceeds roughly as follows:

Janek: You know, if you wanna get laid, you really don't have to pretend to be interested in the pyramid scan. I mean, you could just say, "Hey, I'm trying to get laid." Heh.

Meredith Vickers: I could. I could say that, right? But then it wouldn't make sense why I would fly myself half a billion miles from every man on Earth if I wanted to get laid, would it?

As Neil de Grasse Tyson has pointed out, this is absurd, because it puts LV-223 well within the confines of our own solar system. 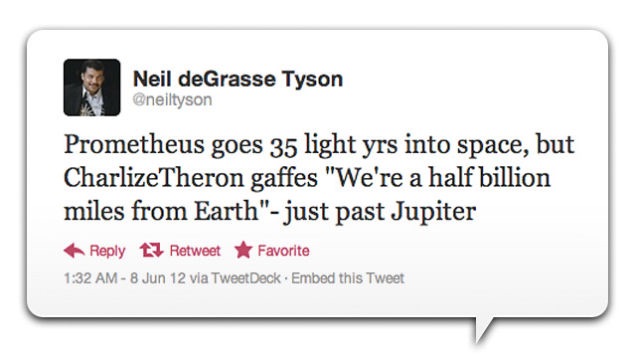 The film tells us that the planet (which is actually a moon of the gas giant Calpamos) LV-223, also known as "Varsa", is actually 35 light years away from the earth, which works out to roughly 206 trillion miles. This means that the real distance is 412,000 times greater than Vickers' estimate. When the earth is closest to Jupiter, it is only 32 light minutes away - the number of light years mentioned is greater than the actual minimum number of light minutes to Jupiter.

The screenwriter, Damon Lindelof, has commented on this issue, but refused to explain the contradiction:

Charlize [Theron] has a line in the movie where she says, “I wouldn’t be half a billion miles away from every man on earth if I wanted to get laid.” And Neil deGrasse Tyson [the well-known astrophysicist] came out said “This would put her somewhere in the neighborhood of Jupiter, when they are much, much further out.” I chose not to say anything because the line was intentional. It had been dinged before we even shot it. But we stuck by it for reasons I don’t feel like discussing.

We also know that there are other obvious goofs in the dialogue. From the same interview quoted above:

A: The “36 hours” line has been burning a hole in my side because I wasn’t there on the day they shot it. I don’t know if it was an ad-lib by Michael or an idea by Ridley, that wasn’t the line that we wrote. So when people contact me and say “Explain this. Is it a glitch in David?” I have to say “I can’t take responsibility for this.” So, I do think in terms of fair play with the audience, Twitter is a medium for me to say “I can’t come out now and bullshit you.” God forbid somebody pulls the script one day and sees that line is not even in the script. So I have to be honest.

How do we make sense of these conflicting accounts of where the planet is? How could the pilot of an interplanetary mission be so wrong about the distance her spacecraft has traveled?

On the subject of why Damon Lindelof felt that he had to keep the line in the film until the final edit, it's notable that the Art of Prometheus book has a large and prominent image of Jupiter (and Ganymede(?) and Europa(?) on the very first page.

It seems likely that some element of the film was originally going to take place in orbit of Jupiter rather than transitioning from Earth directly to LV-223.

Not the answer you're looking for? Browse other questions tagged alien-franchise space-exploration prometheus or ask your own question.

18
Was the atmosphere on LV-223 3% carbon dioxide or monoxide?
11
Where does a Chestburster gestate?
12
Where is the possible location of Engineer's sacrifice scene?
6
In Prometheus we see lot of dead space jockeys/Engineers with their chests burst open. Where are the alien creatures?
11
How did the Prometheus crew know where to land?
6
How/Where did the Yautjas (Predators) get the Xenomorphs?
13
At what speed should a ship travel from Jupiter to Earth to reach Earth in only 3 hours?