Does the DeLorean have any restrictions regarding time travel range?

Inspired when I was considering an earlier question of mine it struck me that the earliest we actually see the DeLorean travel to 1st of January 1885 - the time circuits may have defaulted to that date because that was the earliest date (i.e. 100 years from when it was made and 70 years from when it was in 1955) that the DeLorean could travel to. Yet, we see in the beginning of Back to the Future that Doc suggests the time machine could travel to witness the birth of Christ (the date he uses is 25 December 0000).

So, my question: is there any evidence to suggest there are any restrictions on how far into the future or past the DeLorean can travel to?

Well, the controls are 4-digit year. Because Y2K wasn't realized as a problem back then :)

So, presumably, even if the Flux Capacitor could take you anytime (as per @N_Soong's answer), you couldn't configure the controls outside of 0AD-9999AD year range. 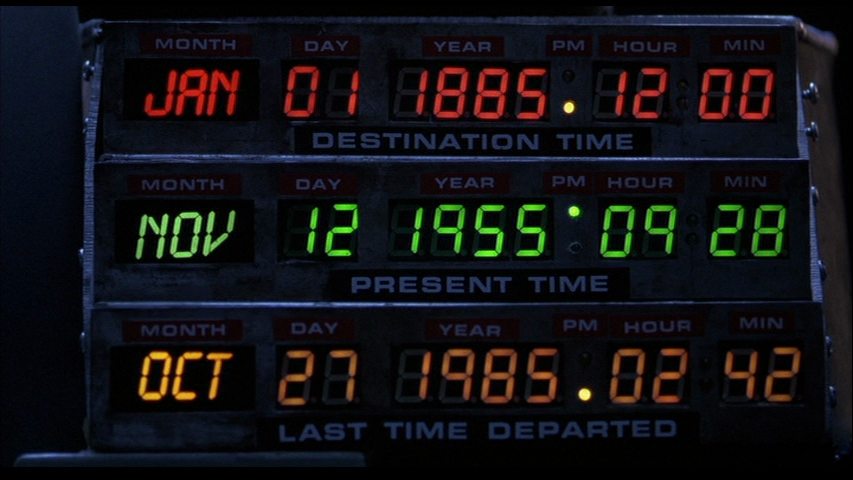 In the Universal Studios theme park attraction, Back to the Future: The Ride (now closed), we see that the DeLorean is capable of travelling to the time of an Ice Age and the Cretaceous Period.

The Cretaceous Period was somewhere in the range of 144 to 66 million years ago, and there have been several Ice Ages that the DeLorean could have travelled to, from one just over 2.5 million years ago, to one over 2 billion years ago. Obviously, these are far outside the 0AD - 9999AD restrictions that @DVK puts forward in their answer.

To me, this shows us that even if there is an upper limit on the time travelling abilities of the DeLorean, we are unlikely to meet them in every day use, with even the most extreme examples of time travel into the distant past been handled just fine by the DeLorean.

However, I'm unsure of how canon this answer is. This question and answer would imply that Back to the Future: The Ride it is part of an alternate universe or a "What-If" type situation, but I don't think that the ride contradicts anything from the film trilogy at any point, and it seems safe to assume that the DeLorean would be capable of traveling to these times in the film trilogy.

Consider all the times we see the DeLorean time travel. Whether it be 1 minute into the future, or 70 years into the past, the DeLorean continues to require the same amount of energy: 1.21 jigawatts (for the Doc). As there is a consistent amount of energy required for these vastly different timespans, there probably is not any constraints on how far into the future or past the DeLorean can travel. The only restrictions would be ensuring that the DeLorean was still in an environment where it had access to the energy it needed for the flux capacitator, and the capacity to speed to 88 miles per hour.

EDIT As pointed out by Grimm The Opiner, a jigawatt (or gigawatt - I like the former because of Doc) is not a unit of energy. Just to explain my answer in light of this the script describes it in the following way:

DOC: Lightning will strike the clocktower sending one point twenty-one gigawatts into the flux-capacitor

which, to the layperson like myself, sounds as though Doc is describing an amount of energy! If the amount of energy was consistent, which from the way it was presented is suggested to be the case, then my argument still stands. See @DVK's answer though; it raises a very good point!

If you consider the early 1990's cartoon TV series canon, this gives additional hints that there is no hard limit.

Season 1 Episode 3 "Forward to the Past":

To test a new invention called the Sonic Garbage Molecular Redistributor, without Marty, Doc and the boys head back to prehistoric times before 3,000,000 years so that they will not endanger anyone.

The series takes place after the events of the third movie. So strictly speaking, this would have to be either the steam train time machine or the DeLorean Mk2, which means they would be able to perform outside any hypothetical limits of the original DeLorean. There is however no indication in the series that there were any improvements made to the Flux Capacitor between the different models.

It depends if there was relative or absolute mode with respect to those 4 digits otherwise one merely makes the jump in 9999 ( or -9998 ) years, resets rinse and repeat. The other consideration is that it is only a time travelliing machine not a T.A.R.D.I.S ( which seems to highly favour London ) and so there must be a travellable suface for it to accellerate ( or decelerate from ) 88mph. It cant be a primeval swamp or a post-nuke blast crater

18
Why did the time circuits default to 1885?
10
Is the BTTF Series of games considered canon?
1
Does the BttF time travel require fuel/power?