Are the planets in Firefly in just one star system or spread across the galaxy?

In the intro to the show it says/suggests the planets to be in one star system. But in episode 9 (Ariel) the intro suggests that they are spread across the galaxy. The specific quote is:

...And terraformed a whole new Galaxy of Earths

Which is it or is it not really discussed? Given that there doesn't seem to be any form of hyperspace/FTL I assume it's just one star system, but at some occasion it was mentioned the Reavers had been to the edge of the galaxy.

actually a cluster of five stars and several brown dwarfs

More precisely the system is laid out as such:
One central A0 class star (where the "central" planets are located) that is orbited by a G5 and G0 (home to the "border" planets), and finally a F5 and a F0 (location of the "rim" planets). There are also a number of protostars scattered in there which help to maintain the habitability of the more distant planets.

Although never mentioned in the aired episodes, a deleted scene from Our Mrs. Reynolds has Malcolm mention

that there are "more than 70 earths spinning in this galaxy"

This signifies that there are a great number of planets in this system of stars, many of which are habitable.

As Phillip mentions the TV Series never made it clear, it wasn't until Serenity that the one giant solar system was confirmed (Wikipedia).

To get an idea of the scale of the solar system of the Verse a "Map of the Verse" was created by the team at Firefly Ship Works. 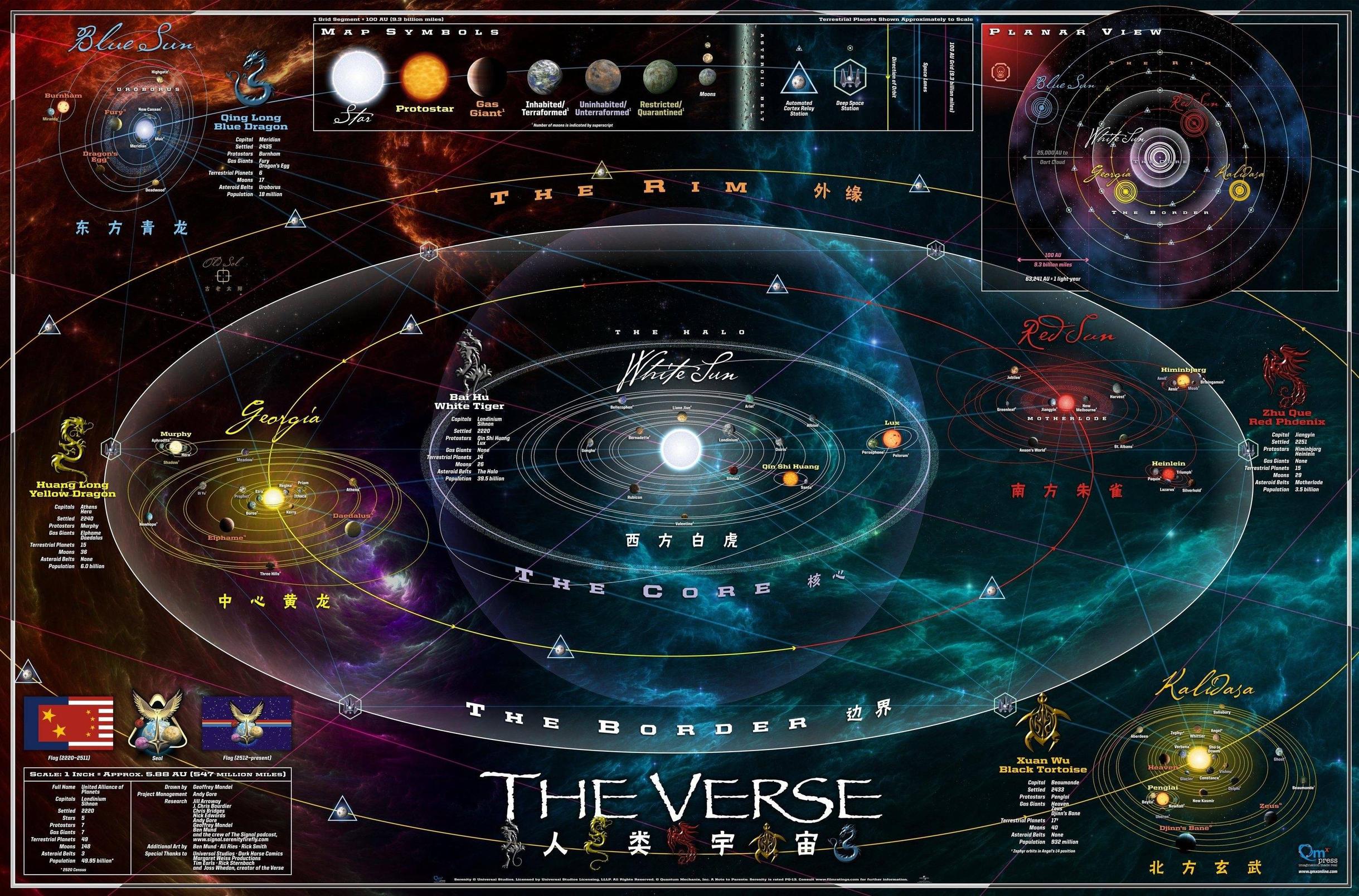 It is stated in Serenity (the movie) that humanity found a new star system.

This system had many planets (conjecture - young system?).

They terraformed planets to make more of them earth like. Some of the terraforming did not take.

According to Wikipedia, which refers to an official document, The Verse is a complex solar system made up of five starts, several brown dwarf proto-stars, and at least 20 planets.

Both the approved RPGs, the Firefly board game, as well as the QMX maps, and the onscreen maps in both Firefly and Serenity, all show a multiple star system.

The official size (as evidenced in The 'Verse In Numbers (TVIN, which is the data derived from the QMX maps and approved by Universal), star orbits are shown to 180 AU distance (1497 LM, or 24.95 light hours). For comparison, Pluto varies between 29.6 and 48.8 AU distance. Sedna is calculated to run between 76 and 937 AU. So, bodies we know to be gravitationally bound can reach further than the distances cited in the official and semi-offical sources.

Note that with the other stars all orbiting White Star (a white star, which, even if a dwarf as is Sol, it would still be more massive than Sol), according to TVIN, two are at opposition at 68 AU (Red Sun and Georgia), then one is at 121 AU (Kalidasa), and the fourth at 180 AU (Blue Sun). So, despite being 5 stars and their planets, they are in fact within gravitational reach of the central star (and would be even if it weren't inherently significantly more massive than Sol), so it's correct to refer to this as a single system.

The "one system" idea may be supported by a lot of sources, but there's a line directly from the show that seems to conflict.

The episodes Safe, Ariel, War Stories, and Heart of Gold all begin with this intro (in Mal's voice):

Here's how it is: The Earth got used up, so we moved out and terraformed a whole new galaxy of Earths.

32
How do the ships in Firefly travel immense distances?
19
How can Firefly Reavers be “smart” enough to drive spaceships? Why their radio conversations sound like some EVF directlly drawn from hell?
7
Why were all the planets so close together in “The Force Awakens?”