Why are Thestrals not a threat to humans?

Despite being predators and carnivorous, JK writes that Thestrals are not in any way threatening to humans and can be domesticated.

My problem with this is, not all Thestrals are domesticated and as natural predators it is unlikely they pose no threat to humans at all. While humans are rarely attacked by wild animals, it does in fact happen.

Furthermore she pictures Thestrals as naturally obedient creatures, which predators never are. Even domesticated pets such as dogs have to be trained.

My question is, how can a dangerous predator and carnivore not be a threat to humans, despite humans falling into their prey range? (Thestrals have no issue preying on larger animals, being huge and invisible to most).

‘Thestrals aren’ dangerous! All righ’, they might take a bite outta yeh if yeh really annoy them –’

‘No – come on!’ said Hagrid, looking a little anxious now. ‘I mean, a dog’ll bite if yeh bait it, won’ it – but Thestrals have jus’ got a bad reputation because o’ the death thing – people used ter think they were bad omens, didn’ they? Jus’ didn’ understand, did they?’

Order of the Phoenix - page 396 - Chapter twenty-one, The Eye of the Snake - Bloomsbury

There is nothing I know of in canon that suggests Thestrals are typically mad, bloodthirsty carnivores, who run amok through the forests of Britain, looking for random humans to victimize. J.K. Rowling did not characterize Thestrals as typically dangerous to humans because Thestrals are her creation and she gets to choose their demeanor. However, within those confines, I think it's safe to assume that, like any being, there are circumstances under which a Thestral might get aggressive toward humans. For example, if a human taunted, deliberately injured, or withheld food from a Thestral, the Thestral could conceivably attack. Hagrid says as much in Order of the Phoenix, as noted above. In canon, the Thestrals are depicted as shy, docile, and tame. See the picture below. 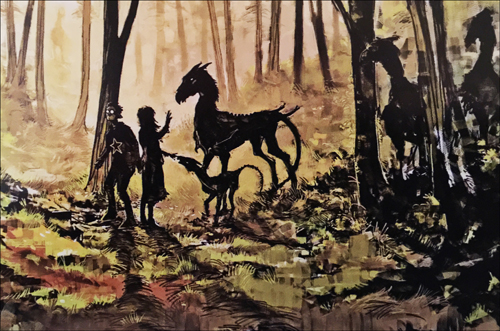 Harry and Luna Feeding the Thestrals by Rob Bliss, from Harry Potter: The Creature Vault by Jody Revenson

In Order of the Phoenix, in chapter seventeen, Professor Grubbly-Plank does confirm to Harry that Thestrals occasionally eat birds.

Another consideration is the possibility that Thestrals are carrion beasts, who forage instead of hunt.

The pottermore article you've referenced describes them as kindly and gentle toward humans, even in their undomesticated state.

Thestrals have a somewhat macabre reputation. In centuries past the sight of them was regarded as unlucky; they have been hunted and ill treated for many years, their true nature (which is kindly and gentle) being widely misunderstood. Thestrals are not marks of ill omen, nor (their spooky appearance notwithstanding) are they in any way threatening to humans, always allowing for the fright that the first sight of them tends to give the observer.

Note that it's perfectly possible for them to be carnivorous (eating small rodents and birds, for example) without being man-eaters:

‘Hmm,’ said Professor Grubbly-Plank, her pipe waggling slightly as she talked. ‘Looks like something’s attacked her. Can’t think what would have done it, though. Thestrals will sometimes go for birds, of course, but Hagrid’s got the Hogwarts Thestrals well-trained not to touch owls.’ - HP: OoTP

And as a matter of fact, they don't appear to be obligate predators at all:

As he crossed the dark yard, the great, skeletal Thestral looked up, rustled its enormous bat-like wings, then resumed its grazing. Harry stopped at the gate into the garden, staring out at its overgrown plants, rubbing his pounding forehead and thinking of Dumbledore. - HP: DH