Why was a hobbit “the most unlikely creature imaginable” to pick up “The One Ring”?

(The One Ring) abandoned Gollum. But then something happened that the Ring did not intend. It was picked up by the most unlikely creature imaginable. A hobbit, Bilbo Baggins, of the Shire.

Gandalf described Smeagol's people as very hobbit-like, so why was a hobbit deemed to be an unlikely candidate to pick up the ring? 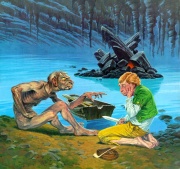 Gollum and Bilbo during the "Riddle Game"

I just have to pitch in because I've been bugged by this sentence for as long as I can remember.

From a purely statistical point of view, the sentence would appear to be nonsense, the ring had in fact been picked up by a hobbit before, but never by say a horse, making said class of creatures infinitely more unlikely (this is perhaps debatable, but stay with me). Even if we decide to exclude beasts, there's still any number of unlikely creatures, more so than a hobbit. My favorite is an ent - that's an unlikely creature to pick up the ring of power if you ask me, at the very least down by the roots of the Misty Mountains.

However, I finally got to the conclusion that we should look at the entire sentence as it stands and realize that it's not merely that a hobbit is unlikely to find it, given that the sway the ring could hold over a hobbit (and thus it's reason for attaching itself to one) is less than most other creatures (especially a goblin of which Misty Mountains are rife), but because it's also Bilbo.

Remember the line from The Hobbit:

[...] and people considered them [the Bagginses] very respectable, not only because most of them were rich, but also because they never had any adventures or did anything unexpected: you could tell what a Baggins would say on any question without the bother of asking him.

-- The Hobbit, emphasis mine.

So it's not only unlikely because he's a hobbit, but because he's a Baggins deep under Misty Mountains and because he's Bilbo, a sedentary individual with a penchant for smoking tobacco outside his, nice, homely hobbit hole and eating and drinking most all of the time. For such a creature, the chance of happening upon the ring of power is unlikely (but still not quite so much so as an ent).

Or, you know, you might go with the idea that perhaps not every sentence of Tolkien's has a completely established logic and coherence with his world, and just say it's a narrative mechanism to say "Woa, this is a bit weird, a hobbit, here?!".

In my opinion, it's a way to say that hobbits are considered a negligible quantity in the game between Good and Evil (at least before the events of the Lord of the Rings). The fact that a hobbit may play a major part in the War of the Ring was completely overlooked by both sides - except, maybe, by Gandalf.

Another way to see hobbits as "unlikely creatures" in these events is to consider that they had never been involved in any important / historical event at the Middle Earth scale. The first chapter of the Lord of the Rings trilogy ("Concerning hobbits") gives you a good example of historical events from the hobbits point of view: river crossings, encounter with humans... but no war, battle, or any high deed. In this sense too, it was unlikely that they suddenly take an interest in diplomacy and geopolitics.

Finally, hobbits were unlikely to pick the ring because they were unlikely to accept its burden, and use it in the way other races would have: elves are wise but arrogant, dwarves are strong but stubborn, humans are brave but greedy... these are "epic" qualities or flaws, and one individual from such races would have done great or terrible things with the power of the Ring. But a hobbit? Let's be serious: they just enjoy good food, beer, and comfort...

Because in all probability there hadn't been a hobbit as far east as the Misty Mountains for centuries, whereas men, dwarves, elves and orcs were all reasonably frequent in the area.

Of all those who lusted after its power, that it fell into the hands of one who found it as a means to perform a neat parlour trick is what makes it unlikely.

Tolkien is highlighting the irony that it would be one of the least significant (in the eyes of others) races that would play the most important role in finally vanquishing Lord Sauron.

It somewhat reminds me of the Mirror of Erised in Harry Potter. No one else could get the stone because they wanted it for what it could do for them. Harry just wanted the stone safe...of course one could always presume that it would have been safer had the mirror kept the stone than putting it in Harry's pocket.

I always interpreted this way.

The ring fell on a tunnel of a orc infested mountain, tunnels that were used or even built by the orcs. So what kind of creature would be likely to find it.

Either one of this would likely use the ring for power and great deeds making the location of the ring easily know to his master. Instead of that was found by a Hobbit, a race that many of the powerful did not know or gave enough acknowledge, and one that only wishes to avoid conflicts, lay comfortable in his home and be freed from the pains that some pesky relatives cause him.

This sentence is referring to the fact that the ring slipped away, abandoned Gollum who had protected it for many years because it wished to return to its former master Sauron. Sauron's spirit had been found wandering the wilderness by the witch-king of Angmar and was at this time being restored to his full power in his fortress at Dol Guldir by his servants the Nazgul.

In the caves of the misty mountains only evil creatures dwelt such as orcs, trolls and the Balrog of Morgoth, all creatures likely to answer Mordors call and any who found the ring would take it to Sauron.

The likelihood of a Hobbit ever entering these mountains was remote and Bilbo being their at precisely that moment to find the ring astronomical.

I'd argue that the unlikely should not refer to ents or beasts (as others have mentioned) to begin with, because they are not among the creatures that are 'likely at all' to pick up the ring.

In other words, the hobbit is the most unlikely creature among the creatures that have some sort of probability to pick it up whatsoever. In Gandalf's sense, then, likeliness would have nothing to do with the utterly (and physically) impossible.

The hobbit-kind was simply overlooked as unimportant, but actually capable.

I'd add that the ring was probably not very satisfied with the progress that its last bearer made (hiding in a cave), and its last bearer was also one of the hobbit-kind. But hiding in the cave is also not very hobbitish, it was probably the result of the nature of the hobbits and the corruption effect of the ring. It is very reasonable to think that the ring doesn't intend, nor has it expected, to end up in the hands of another hobbit.

And then you could even add, as zrvan pointed out, that the family of Baggins in general were not very adventurous hobbits, and that Bilbo was respectable and probably had much higher morals than many of its own kind.

[...] and people considered them [the Bagginses] very respectable, not only because most of them were rich, but also because they never had any adventures or did anything unexpected: you could tell what a Baggins would say on any question without the bother of asking him.

The other answers haven't mentioned this fact:

Through the books Tolkien makes a point out of the ring having a "will" of its own, it "designs" to fall into the hands of men/elves/orcs, which it can easily corrupt.

Falling into the hands of a hobbit does not fit into this. It is therefore unlikely from the point of view of the ring.

You have to realize that JRR Tolken was a Christian and wrote this as an allegory about Christ and the Church. So the Hobbits being the most unlikely creature to bear the burden is a representation of Christ, the least likely character to make social change — he was born in the world's "ghetto" and did not even have a "day's labor" worth of money when asked about taxation. You can't understand Bilbo without understanding Christ.

Not the answer you're looking for? Browse other questions tagged the-lord-of-the-rings tolkiens-legendarium rings-of-power or ask your own question.

46
Why was Sméagol affected by the ring so fast, while both Frodo and Sam could handle it without immediately trying to choke each other?
37
Could the ring have intended to be picked up by Bilbo?

37
Could the ring have intended to be picked up by Bilbo?
30
Why was The One Ring “precious”?
19
How did the One Ring abandon Gollum?
9
How did Bilbo Baggins find the One Ring exactly?
15
Who came to know Gollum had once possessed the One Ring?
37
Did J.R.R. Tolkien ever write a deeper connection between The Hobbit & Lord of the Rings: Fellowship of the ring?
18
How did Gandalf and Mordor come to know about Gollum?
13
Did Sauron know the hobbit Ringbearers' identities?
7
Where Did Gollum Get 'Shire' From?
11
Thorin's imprisonment “set right”