When does Batman get called the "Dark Knight"?

I've started watching Batman: The Animated Series and I'm into the second season, I believe. There is an episode where Robin says that people call Batman "The Dark Knight", but I don't recall a time in that series where anyone has said that. When does someone (specifically in this series) refer to Batman as "The Dark Knight"?

I found a set of transcripts of Batman: The Animated Series here, and used command-F (control-F on a PC) to search for "Dark Knight" in them. The episodes are listed out-of-order on that page, but looking at the production order here, it seems the term was first used in episode 15 of the first season, "The Cat and the Claw", when Catwoman said "So long, Dark Knight." It was also used in some other first-season episodes:

The term didn't originated in the series though, it had been used in the comics previously. Prior to Christopher Nolan's film The Dark Knight, most people who knew the term would probably have associated it with Frank Miller's comic series The Dark Knight Returns, which became one of the best-selling graphic novels of all time. Miller's wikipedia page says 'Miller created a tough, gritty Batman, referring to him as "The Dark Knight" based upon him being called the "Darknight Detective" in some 1970s portrayals.' Someone on this reddit thread suggests the term "Darknight Detective" probably was invented by Batman comic writer Denny O'Neil in the 1970s. The book Hunting The Dark Knight: Twenty-First Century Batman refers on p. xii (viewable on google books here) to '"Denny O'Neil and Neal Adams' 'Darknight Detective' of the 1970s"', and another book on the history of Batman, Batman Unauthorized: Vigilantes, Jokers, and Heroes in Gotham City says on p. 20 (viewable on google books here):

However, it was as the camp television show was in its final days that a writer named Denny O'Neil (born in the same month and year as Batman himself, May 1939) took over the reigns of the comic book and changed everything. Partnering with the soon-to-be-legendary artist Neal Adams, who brought a hitherto unseen level of realism to the depiction of superheroes, O'Neil revamped the Batman legend, either reinventing the character or returning it to its 1939 roots, depending on your perspective. Robin (who was previously presumed to be thirteen) was swiftly aged and sent off to college. Gone mostly were the costumed villains, replaced by international terrorists, corrupt politicians, and mafia bosses. O'Neil's Batman was a Darknight Detective—emphasis on "detective"—more akin to Sherlock Holmes than a superhero, who employed his wits and credible criminology methods in the apprehension of evildoers.

And here is a comic from 1982 which uses "Darknight Detective" for a title.

edit: Thanks to JC2k8, who notes that this wikipedia article says the name "Dark Knight" actually dates to the first standalone Batman comic (after his initial origin in Detective Comics), Batman No. 1, from 1940. It seems it was in the debut story of the Joker, which is posted on this site...below is the final panel on this page from that story (it was recently posted on the twitter feed of Marc T. Nobleman, who wrote the book Bill the Boy Wonder about Batman co-creater Bill Finger that was referenced in the wikipedia article): 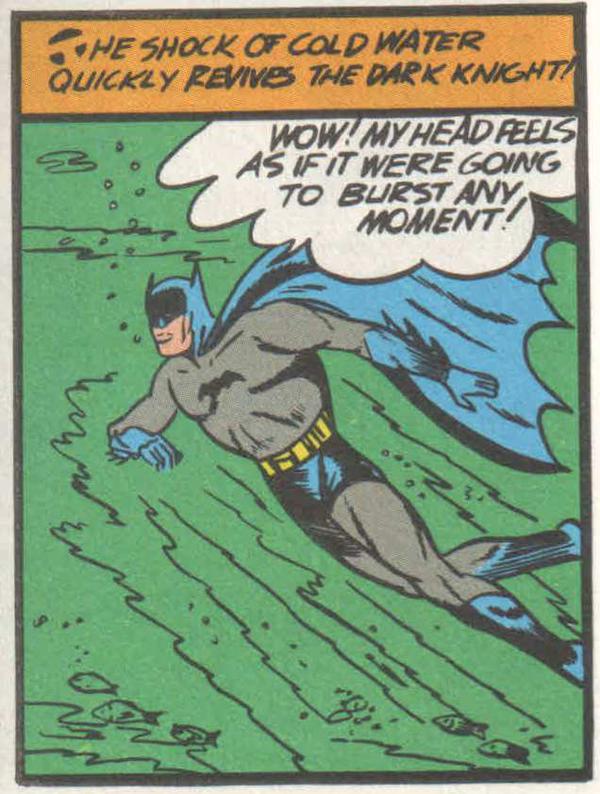 Perhaps the term had been out of usage for a long time before Denny O'Neil brought it back for his more gritty take on Batman?

Not the answer you're looking for? Browse other questions tagged dc batman episode-identification dc-animated-universe or ask your own question.

30
What time period is "Batman: The Animated Series" set in?
13
Did Batman use his cape to glide before The Dark Knight?
8
What happens to Harvey Dent when the car turns over in The Dark Knight?
8
Does Batman really love French onion soup?
11
Which of these stories are in the same continuity as Batman: The Long Halloween?
9
Was there a comic where Batman and Robin were attached to a giant piano?
6
Has Batman ever unintentionally/accidentally killed someone?
17
In the comics, have any of the Robins called their costume "target attraction" for villains?