Following this image I found online: 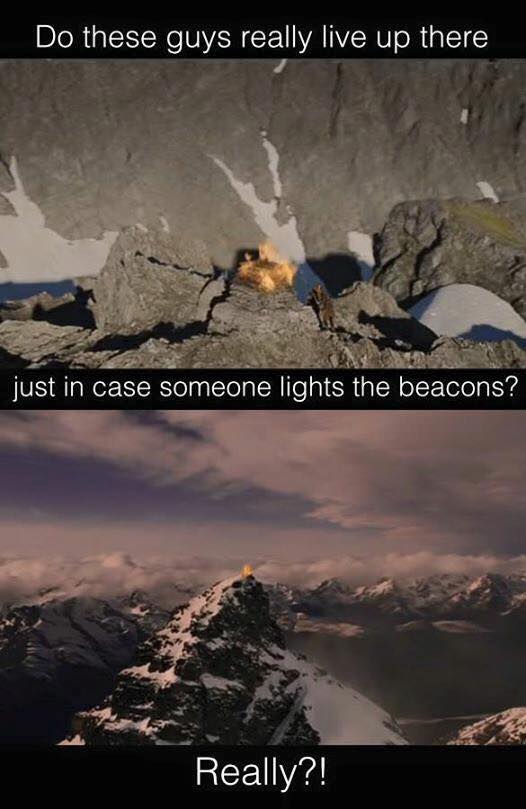 It seems really cold on top of some of these mountains and there are no villages or whatsoever.

Did people live beside the beacons? Yes. Were the beacons located in places as inhospitable and inaccessible as the ones in the photos? Definitely not.

Where were the Beacons?

What little information we are given makes it clear that the beacons were actually located atop foothills on the periphery of the White Mountains, not on the mountains themselves.

“…The Lord of the City had beacons built on the tops of outlying hills along both borders of the great range, and maintained posts on these points where fresh horses were always in readiness to bear his errand-riders to Rohan in the North, or to Belfalas in the South.”
— Gandalf to Pippin, The Return of the King, Book V, Chapter I: Minas Tirith

The beacons were two series of permanently manned stations maintained by the lord of Minas Tirith for raising the alarm in northern and southern Gondor respectively. The stations were on the summits of foothills in the White Mountains (Ered Nimrais). The stations kept signal fires in readiness and stabled fresh horses for couriers.

We can only speculate on the positions of the southern posts, but based on the description of following foothills of the White Mountains, and their spread of 20 to 30 miles, there may have been as many as ten beacons along the southern foothills, following a course west by southwest through Lebennin and passing through the hills north of Dor-en-Ernil, south of Ringló.

Also, [in Jackson's movies] the beacons were depicted as signal fires only (without stables), atop mountain peaks instead of foothills.

Here is a map of the locations of the northern string of beacons - note that they are clearly placed on relatively tiny hills, quite a distance from the ridge line, rather than being atop enormous mountains: 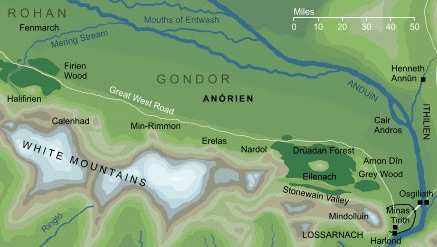 To make things clearer, here is the same map, with red dots on the locations of the beacons: 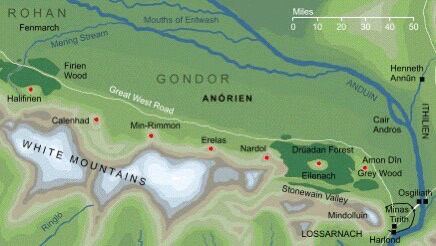 And here is a topographic map with the beacons in blue, produced by the "Ask Middle-earth" blog, from a map by Karen Wynn Fontstadt: 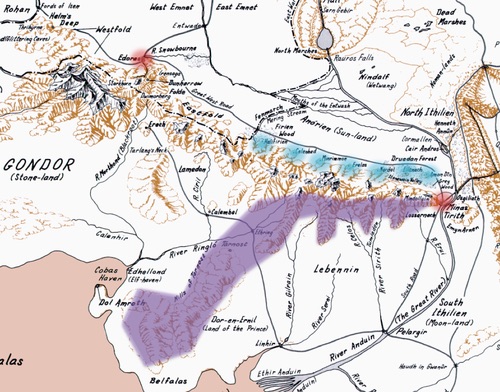 People lived beside the beacons, but they were located on relatively small foothills, not on top of gigantic mountains. The beacon stations had stables full of horses, which were used to carry messages back and forth between Rohan and Gondor; this was an arrangement very similar to the old "Pony Express" mail system in the U.S. The beacons were very easy to reach, and their locations were hospitable - the hills were small enough to provide grazing pastures for the horses. In fact, I wouldn't be surprised if the highest level of Minas Tirith was at the same altitude, or perhaps even higher, than some of the beacons.

Why are Peter Jackson's mountains so ridiculously big?

Because unlike Tolkien, who was concerned about the plausibility of his story, Jackson was primarily interested in making everything look impressive and magnificent. Which mountains are impressive and magnificent? The really big ones. He probably didn't care much about whether it made sense for the mountains to be so enormous, because they looked cool. It didn't matter if it was impossible for anyone to climb up and down the mountain in a day, and it didn't matter if there was quite obviously no food or shelter on the mountain top. It just had to look good.

But look at this mountain: 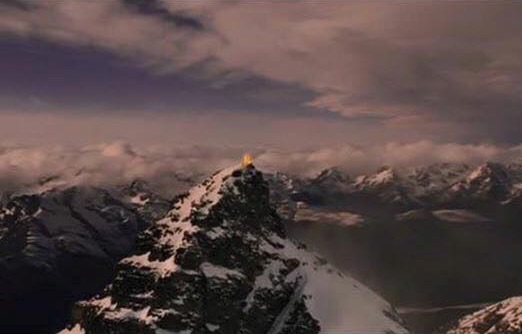 It is ridiculously huge. The peak is well above the snow line, and it actually appears to be above the lower level of clouds. By all indications, it would be impossible to survive there for more than a few hours, or with modern cold weather gear, a couple of days. This is the kind of mountain that only mountain climbers can handle. The nearest habitable location on the slope, if it even exists, is well out of frame.

Yet, in the movie, this beacon is lit within seconds of the previous beacon. Since there is absolutely no way that anyone without a helicopter (or a giant Eagle) could have reached the top of the mountain from somewhere below the peak that quickly, we are obviously expected to believe that the guy manning this beacon was just sitting around waiting for the other beacons to be lit. This is absurd.

How would you get food and water up that high on a consistent basis? A professional mountain climber might be able to carry a couple of days worth of supplies, but that would mean that a climber is sent up the mountain every few days. Judging by the number of corpses littering Mount Everest, this mountain would also be covered with the bodies of supply runners who didn't make it up/down the mountain.

Furthermore, the beacons are useless unless they can be lit in a timely manner. If there were beacons on mountains this tall, the firewood would almost certainly be covered in snow for much of the year. The peak would be inaccessible for several months every year. The poor hapless sucker who was forced to live on the mountaintop would be dealing with temperatures far below zero on a frequent basis. He would also be suffering from oxygen deficiency due to the altitude. His food and water would be frozen solid, and he can't even light a fire to defrost them, because the other beacon tenders would see it and think that they were supposed to light their own beacons.

The point is this: the mountains in the movies are just too big for anyone to live there for any length of time. This also means that they are too big for people to safely climb up and down them on a routine basis. Placing the beacons on mountains of this size would be self-defeating and counterproductive, because the wood would be useless and the guys who were supposed to light the beacons would be dead almost as soon as they manned their positions.

The mountains in these pictures are probably very similar to Caradhras, the mountain that almost killed the Fellowship of the Ring. They were only passing through, so to speak, whereas the beacon tenders, if they were required to stay with their beacons, would have to spend weeks or months living in the same conditions that almost killed the Fellowship in a single night. It is just not possible.

The excellent fan site "Council of Elrond" does a great job of describing the problem with Jackson's version of the beacons:

Then a sequence of aerial photography shows all of the beacons between Gondor and Rohan being lit, one by one. This is an exceptionally pretty part of the film, and shows off New Zealand scenery wonderfully! There’s only one small problem – when choosing which peaks to use for the fires, Peter Jackson seems to have forgotten that people would actually have to be able to get to the beacons to light them (and I don’t mean by helicopter), and also that the beacon guards would have to have at least some place to shelter, if not live in semi-luxury, during their stints in the middle of nowhere, constantly looking out for a signal that is very unlikely to ever be seen.

Judging by the number of corpses littering Mount Everest, this mountain would also be covered with the bodies of supply runners who didn't make it up/down the mountain.

To be completely fair, you don't need a mountain to be extraordinarily high to be pushing through lower levels of clouds. Really you could see that on peaks ~10,000-18,000 feet, which is a sizeable mountain, but not something that's going to kill people the way the Death Zone on Everest does. There are plenty of ranges in that elevation that do have porters bring supplies up regularly, and no, they don't die at any appreciable rate.

But would it be very inconvenient to maintain some sort of cabin or encampment there? Sure.

He would also be suffering from oxygen deficiency due to the altitude.

Not really. It certainly would take a few days to fully adjust to that altitude, but you can remain indefinitely.

His food and water would be frozen solid

he can't even light a fire to defrost them, because the other beacon tenders would see it and think that they were supposed to light their own beacons.

Shouldn't be too hard to have a fire built with a bit of protection around it to protect it from wind and visibility. The pyres are about 10 feet tall of firewood- surely people can distinguish between a small, hidden campfire and an enormous signal fire.

-8
How do the beacons atop each mountain light up?
1
Who manned the Beacons of Minas Tirith?
44
Were the Beacons of Gondor real or animated?
22
How long did the "beacon call" from Minas Tirith to Edoras take?
9
Were there beacons on both sides of the White mountains and if so were they both lit?
0
Which mountain is higher, Caradhras or the Halifirien?

9
The Silmarillion -- Different versions?
90
Why did the Fellowship not choose to pass the Misty Mountains further north or south?
16
Why didn't the Hobbits get frostbite?
8
Was Frodo's vision from Amon Hen accurate?
15
Why were there so many orcs without armor at the Battle of Helm's Deep?
23
Why did the bodies of the wargs that attacked the Fellowship in Hollin disappear?
1
Eastern Elven realms in the 2nd age (and beyond?)
76
Are the mountains surrounding Mordor natural?
27
How can Radagast come across Gandalf and Thorin's company?
9
Did Sam really plan to attack the orcs in Shelob's lair in the very end of The Two Towers?