Do all elven blades glow blue in the presence of orcs?

There have been a couple of questions that I believe are related to this one, for example this one that asks why Sting glowed blue in the presence of orcs, and this one about the origins of Sting briefly covers the topic as well.

From my vague recollection of the books, I believe that at least some of the Dwarves' blades shone near goblins and orcs, but my memory is a bit vague.

So, as the title suggests - did all the elven blades have this ability (perhaps it was a residual part of the forging process)? Or was it only imbued in a certain few?

There's some evidence that elven-swords from the First Age glow in the presence of Orcs. From Fellowship of the Ring (emphasis mine):

After only a brief rest they started on their way again. All were eager to get the journey over as quickly as possible, and were willing, tired as they were, to go on marching still for several hours. Gandalf walked in front as before. In his left hand he held up his glimmering staff, the light of which just showed the ground before his feet; in his right he held his sword Glamdring. Behind him came Gimli, his eyes glinting in the dim light as he turned his head from side to side. Behind the dwarf walked Frodo, and he had drawn the short sword, Sting. No gleam came from the blades of Sting or of Glamdring; and that was some comfort, for being the work of Elvish smiths in the Elder Days these swords shone with a cold light, if any Orcs were near at hand. Behind Frodo went Sam, and after him Legolas, and the young hobbits, and Boromir. In the dark at the rear, grim and silent, walked Aragorn.

Fellowship of the Ring Book II Chapter 4: "A Journey in the Dark"

There's limited support for this in The Silmarillion. Túrin Turambar's sword, Gurthang (previously Anglachel), is described as glowing, though no mention is made of orcs:

The sword Anglachel was forged anew for him by cunning smiths of Nargothrond, and though ever black its edges shone with pale fire; and he named it Gurthang, Iron of Death.

However I can find no other reference to glowing, gleaming, or shining swords. LAK in comments directs me to a passage of The Silmarillion that might describe magically-glowing swords, but it's ambiguous:

The light of the drawing of the swords of the Noldor was like a fire in a field of reeds; and so fell and swift was their onset that almost the designs of Morgoth went astray.

I don't recall reading anything in the book which would suggest that all Elven blades glow, but it is difficult to prove a negative - for instance, there wouldn't be a passage that said "The Orcs drew nigh, and Legolas drew his sword, which wasn't glowing because it didn't do that kind of thing."

"...being the work of Elvish smiths in the Elder Days these swords shone with a cold light, if any Orcs were near at hand".
- The Fellowship of the Ring

This passage could be interpreted as saying that all Elven blades can glow, but that's not how I understand it. Consider the following sentence:

"Being the work of a talented carpenter, the tabletop was beautifully inlaid with delicate, hand-carved, interlacing floral patterns."

After reading this sentence, do you believe that talented carpenters are only capable of making tabletops with interlacing floral patterns, and nothing else? Of course not. The sentence really means "if a tabletop is beautifully inlaid with delicate, hand-carved, interlacing floral patterns, the person who made it was probably a talented carpenter".

Applying the same logic to the quote from Fellowship of the Ring, we can probably say that it is really telling us: "If a blade glows in the presence of Orcs, it was probably made by Elvish smiths, most likely in the Elder Days". Assuming that this is, in fact, the case, it seems likely that all blades which glow in the presence of Orcs are Elven, but not every Elven blade can glow.

However, we can look to the movies, despite all their flaws, to corroborate the idea that not all Elven blades glow. Here, too, it seems to be the case that some Elven blades, like Sting, glow, but most of them don't. I came to this conclusion after finding the following pictures and videos. I made the assumption, which I think is quite reasonable, that Legolas, Haldir, Elrond, and the Elves at Helm's Deep, the Battle of the Five Armies, and the Siege of Barad-dûr were armed with Elven blades.

If my assumption is correct, and if the images and videos below are reliable sources, it would appear that glowing is not a natural byproduct of Elven craftsmanship. That is to say, a sword won't glow in the presence of Orcs simply because it was made by Elves; the Elves have to deliberately make it in such a way that it glows. For whatever reason, they usually don't imbue their swords with the ability to glow - the actual number of glowing blades in the story (both in the books and in the movies) is relatively small.

On a side note, Narsil, which was originally made by a Dwarf, doesn't glow in the presence of Orcs, even after it is reforged by the Elves of Rivendell and christened "Andúril". This suggests that neither the initial creation of a sword by Elves, nor the reforging of a sword by Elves, is enough to make it glow around Orcs.

By way of comparison, here is what Sting looks like when Orcs are near: 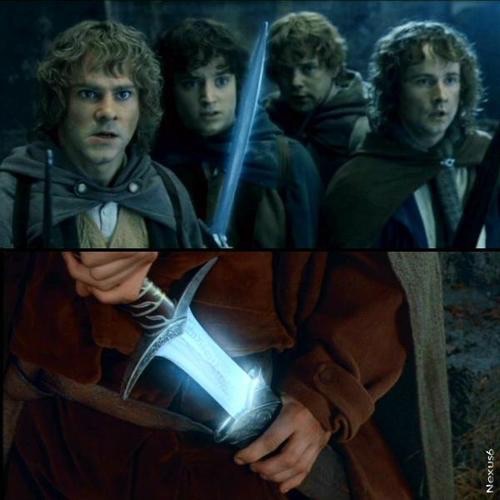 Note the total lack of glowing in the following images and videos: 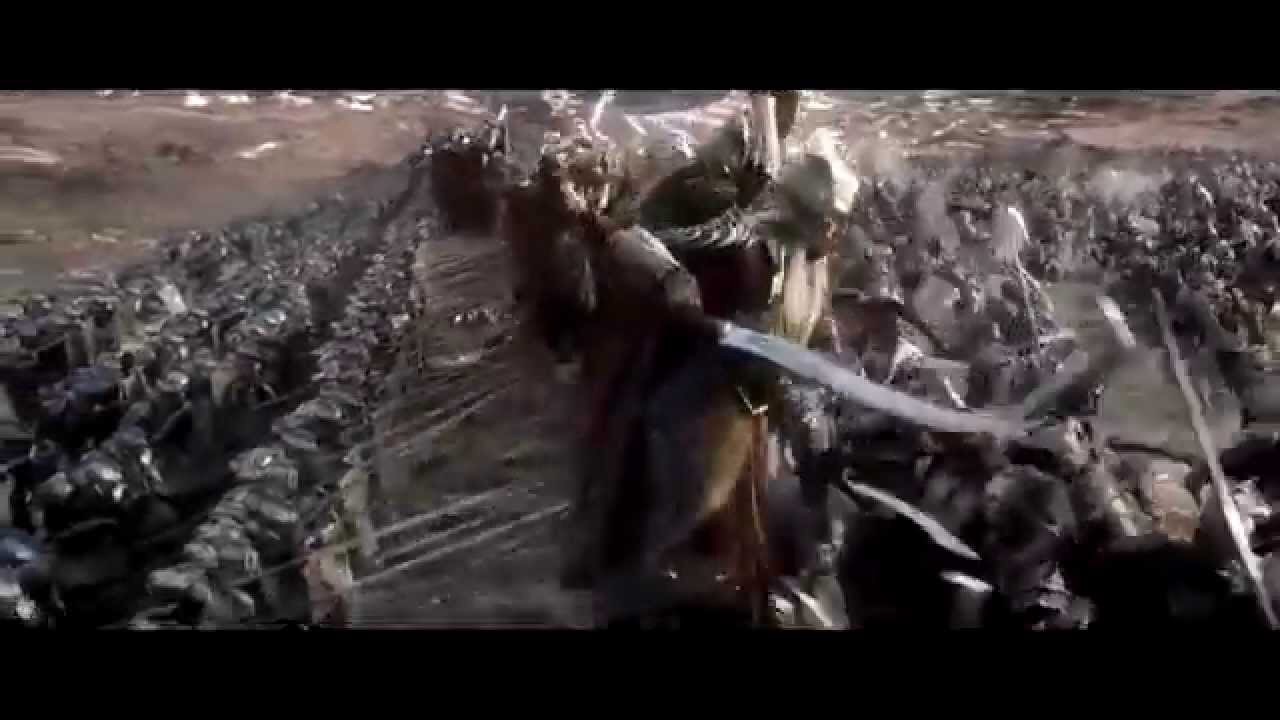 Elves and Dwarves at the Battle of the Five Armies.

Elven army at the Siege of Barad-dûr.

Two pictures of Haldir and his sword, at Helm's Deep.

Two pictures of Legolas and his knives, at Helm's Deep. 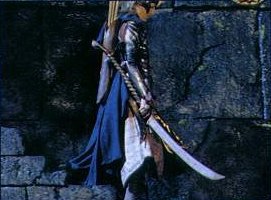 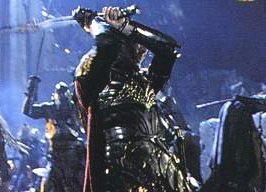 Elrond and his Elven army at the Siege of Barad-dûr.

When the regiment of Elves who came to Helm's Deep draw their swords, none of them seem to be glowing (the sword drawing happens at about 0:40 into the clip):

"The elves were the first to charge. Their hatred for the goblins is cold and bitter. Their spears and swords shone in the gloom with a gleam of chill flame, so deadly was the wrath of the hands that held them."

The Hobbit, Chapter 20: "The Clouds Burst"

The passage suggests that the glow may be synthesised due to a characteristic of the wielder, and is not solely a property of the weapon or its forging.

The first elven blades were in fact forged (by Feanor in Valinor, and by the Sindar aided by the Dwarves in the Third Age of the captivity of Melkor) before the elves were aware on the existence of the Orcs, and their dangerous nature, so the blacksmiths couldn't include this ability.

But is it possible, that many among the First Age swords did gleam, but I think, this was the property of the blades produced in Gondolin.

I think that there is more evidence about glowing elvish blades. I think that The Hobbit describes some elven blades such as Glamdring and Orcrist as glowing when orcs or goblins are near.

Not the answer you're looking for? Browse other questions tagged the-lord-of-the-rings tolkiens-legendarium the-hobbit elves magical-items or ask your own question.

26
Why did Sting glow blue when Orcs were near by?
11
Why did the Elves only create 3 blades that could glow blue?
8
What special properties do the named swords have in Tolkien lore
11
Details on the Origin of Sting

26
Why did Sting glow blue when Orcs were near by?
13
Do the bearers of the Elven rings know the identity of the other bearers?
18
What is the Elven Diet?
2
Was Thrain aware of the necromancer's presence in southern Mirkwood?
10
The Half-Elven and their choices
10
Do non-Elven blades damage the Nazgûl despite being destroyed?
11
How fast does information about the presence of orcs/goblins reach “Sting”?
11
Why did the Elves only create 3 blades that could glow blue?
10
What's the longest elven family tree we know of?
25
From what distance can Sting detect Orcs or Goblins?