Spider-man and the wrestling ring

In both 2002's Spider-man and 2012's The Amazing Spider-man Peter Parker somehow ends up in a wrestling ring. Is this based on a storyline in any of the Spider-man comics?

Indeed, this goes all the way back to 1962 and the the first-ever Spider-man story, Amazing Fantasy 15. From comicbookresources.com:

Peter decides to test out his newfound powers by taking part in an amateur wrestling competition, donning a mask just in case he loses. Peter quickly beats pro wrestler Crusher Hogan and wins the competition prize money. A TV producer (later said to be a TV agent named Max Schiffman) witnesses the event and convinces Peter to perform on late night TV. He suggests Peter keep the "mask angle" since a secret identity is "great showmanship."

Minutes after his television debut as the "Amazing" Spider-Man, the web-spinner sees and ignores a thief that runs past him and escapes the building. When a security guard asks why Spidey didn't trip or grab the guy, the teenager displays newfound arrogance by proclaiming that he is no longer concerned with anyone but himself. Catching criminals isn't what he's paid to do.

For days (or weeks), Spider-Man continues to impress studio audiences and play to packed rooms. But one night, Peter finds police at the Parker home. They explain his Uncle Ben surprised a burglar who then shot and killed him. The burglar got away but police have cornered him at the old Acme warehouse at the waterfront. Enraged, Peter dons his Spider-Man outfit and confronts the burglar directly. After knocking the killer out, Peter sees his face and realizes in horror that it's the same thief from the studio. Guilt-ridden that he could have prevented his uncle's death if he hadn't been selfish, Peter realizes that "with great power there must also come -- great responsibility."

The movie adaptations tend to leave out the middle section, where he becomes a TV personality, likely in the interests of time. I've included scans of a handful of pages below (note that I did omit some of the in-between pages). 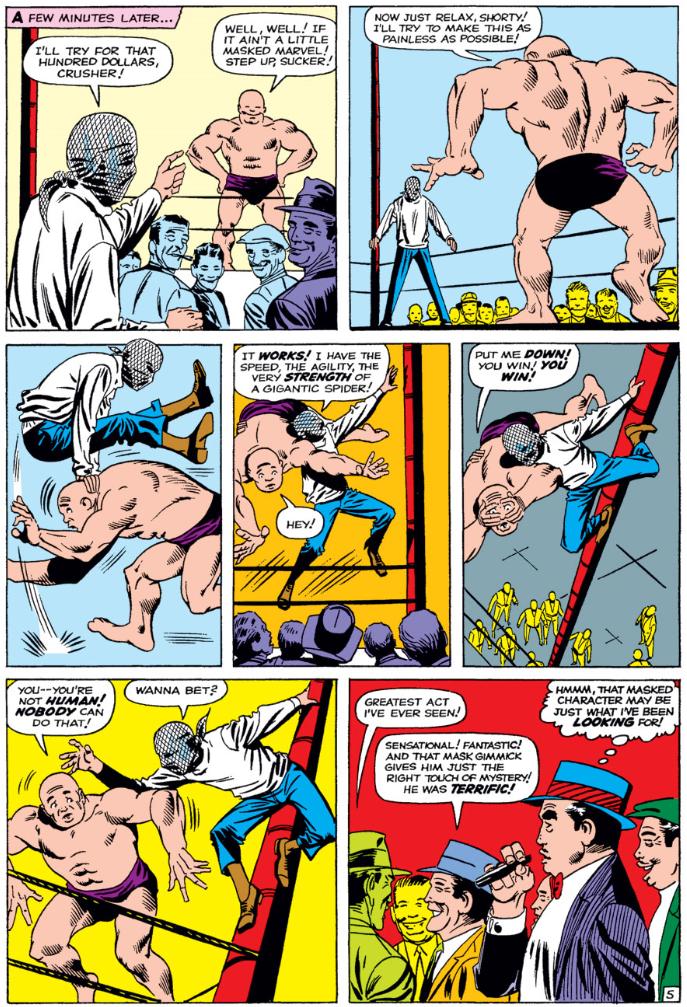 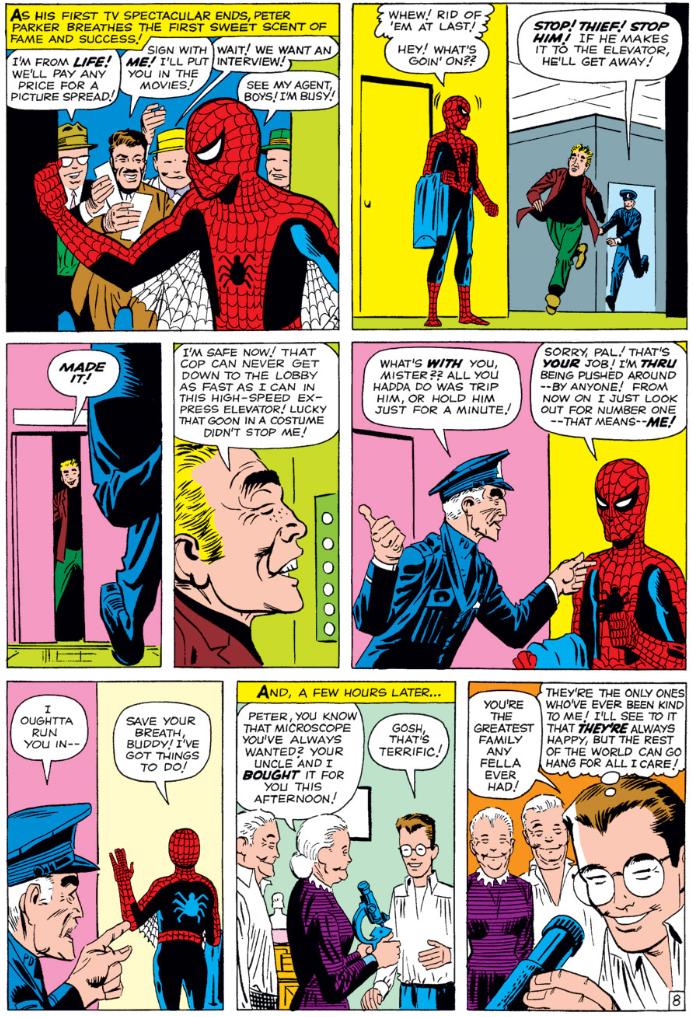 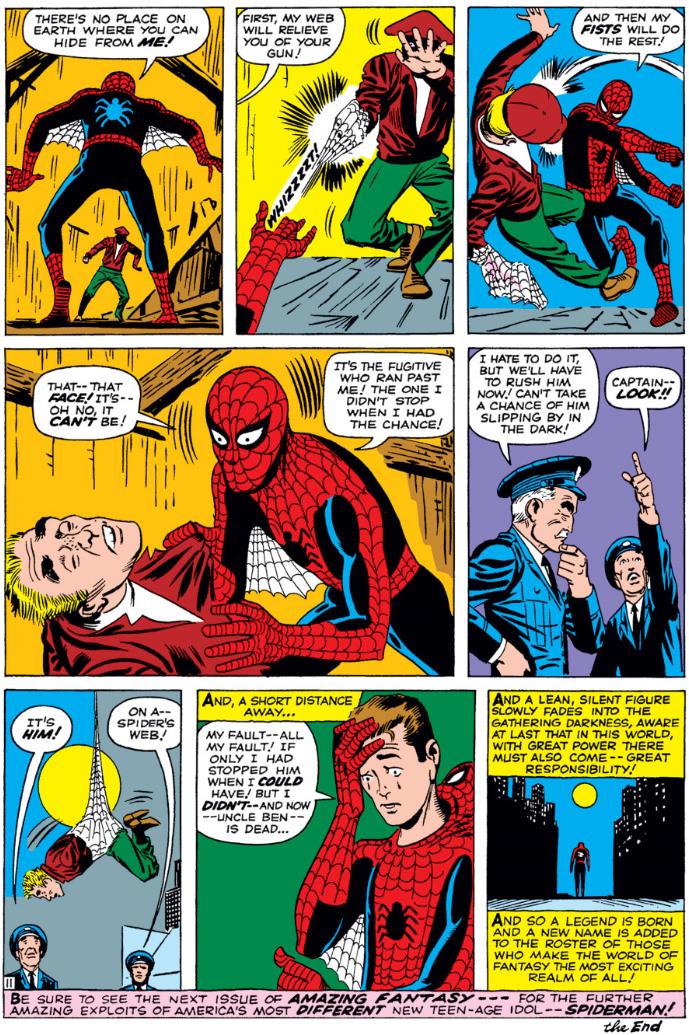 Jason Baker just beat me to the punch, but since I already got all the pictures ready, I'll add them here to supplement Jason's answer.

In the comics, as in the movies, one of the first things Peter Parker does after acquiring his superpowers is to wrestle "Crusher Hogan" for a cash prize. This takes place in Amazing Fantasy #15. 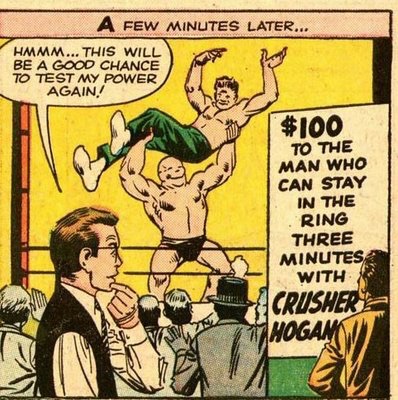 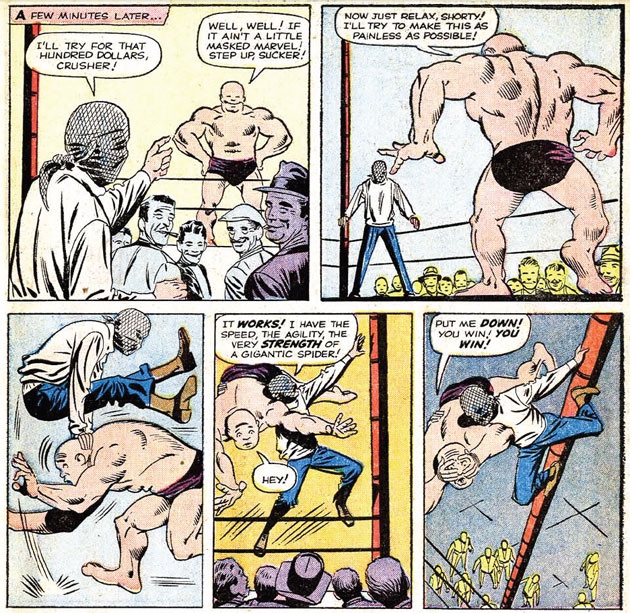 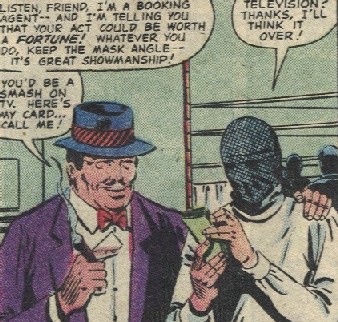 Not the answer you're looking for? Browse other questions tagged spider-man adaptation-comparison marvel or ask your own question.