Are the crew of the Enterprise-D famous?

We all know that the Enterprise-D had a wide variety of exciting adventures, exploring strange new worlds, seeking out new life and new civilizations and just generally going boldly where no one has yadda yadda. They even saved the whole damn Earth on at least a couple of occasions.

So how were the ship and crew viewed back home? Were they famous (celebrity status) with their adventures pored over in the newspapers daily or were their exploits the sort of thing only a space-nerd would be interested in, housed in obscure journals and secret mission reports accessible only to Starfleet Admirals?

In the TNG episode "Family", Picard returns to Earth for shore leave after events that included his capture and transformation by the Borg, and a Borg cube arriving at Earth to assimilate humanity — a catastrophe that was averted by the intervention of the Enterprise and her crew.

The episode gives us the strongest hints that Picard, by that point, had become well known back on Earth.

MARIE: The Mayor wants to give you a parade.

MARIE: Give you the keys to the city.

PICARD: No. he does not. I'm here to rest and spend some time with my family.

MARIE: Well, I've already warned the Mayor not to make any plans without talking to us.

Granted, this is only Picard's hometown, but not everyone is famous in their own hometown (or at least if they are, often not for the right reasons).

Much more telling: when Picard meets his friend Louis about the project to create a new subcontinent on Earth, Louis indicates that the United Earth government is seeking Picard to take over this project, which is indicative of Picard's influence, reputation, and fame:

LOUIS: You know, it's such a shame. The government is looking for someone to take over the project. A real leader who'll go in there and get things moving. And they are looking for you, Jean-Luc. I know, I know, you'd never leave Starfleet.

PICARD: No, I'd never leave Starfleet.

LOUIS: They want you. I mentioned your interest in the project, that's all. That's all I had to say. They jumped at the prospect.

Further along in the episode, Picard and his brother Robert have the following exchange:

ROBERT: Mind if I ask you a question? What the devil happened to you up there?

PICARD: Is this brotherly concern?

ROBERT: No. Curiosity. What did they do to you?

PICARD: You know what happened.

ROBERT: Not precisely. I gather you were hurt. Humiliated. I always thought you needed a little humiliation. Or was it humility? Either would do.

Their exchange suggests that some of the details regarding the Borg and the Battle of Wolf 359 were reported to ordinary citizens on Earth, likely via the Federation News Service. In particular, Picard's plight seems to have been reported to some extent. Since Robert and Picard were not really on speaking terms before this point, one must assume that Robert heard these details through the news.

Although current events (in particular, the Borg invasion of 2367) are certainly the main thrust behind Picard's fame on Earth, it does help that the Picard family is already famous: 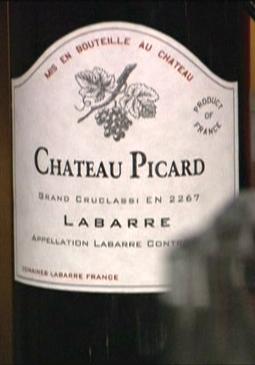 It is more difficult to ascertain whether the other senior officers of the Enterprise-D are famous on Earth, but we can make some reasonable speculations nonetheless:

As for Laforge, Crusher, Troi: there isn't much information from which to draw conclusions about their fame (or lack thereof). I suspect, nevertheless, that the success of the Enterprise-D is probably much more closely associated with Picard than with any of the other officers on board.

Note: Some have asked about O'Brien. It is true that he has been called the "Hero of Setlik III" for his actions during the Battle of Setlik III in the first Federation-Cardassian War. This would make O'Brien famous on Setlik III, and perhaps within certain Starfleet circles, but I suspect fame on Earth (which is what the question is about) would be unlikely. Perhaps if he had attended the Aldebaran Music Academy like his father told him to, his music career would have taken off, and then he might have been famous throughout the Federation for other reasons!

Possibly - perhaps more the ship than the individuals of the crew

The role of the news services in TNG is really downplayed from what I can see, however by piecing together some pieces of evidence it would be reasonable to think that the Enterprise-D, her crew probably being synonymous with the ship itself, was famous. Consider the following pieces of evidence:

A news service we have been informed of (emphasis mine):

During the Gorkon-assassination crisis in 2293, Valeris reported to Captains Spock and Scott that Azetbur had been named Chancellor of the Klingon High Council, citing that "it was on the news." (Star Trek VI: The Undiscovered Country)

From this we can gather that major galactic political events were most definitely the subject of news. Considering the number of political events that the Enterprise-D was involved in (for example, first contact situations; escorting of diplomats) the ship's role would probably be mentioned somewhere in news services.

If you recall from Generations (see video below) the reporters were quite animated throughout the launching, especially when the ship was dispatched on a rescue mission. Reporters in the 23rd and probably 24th century were still evidently dying to get a good story, so they would no doubt be digging to find any information they could and the Enterprise-D was involved in a lot of sticky situations!

In 2404 of an alternate timeline, a news program showed a video clip of the USS Voyager's flyby over the Golden Gate Bridge after returning to Earth, in honor of its ten-year anniversary. A commentator on that news program stated:

"These should be familiar images to everyone who remembers USS Voyager's triumphant return to Earth after twenty-three years in the Delta Quadrant. Voyager captivated the hearts and minds of the people throughout the Federation, so it seems fitting that on this, the tenth anniversary of their return, we take a moment to recall the sacrifices made by the crew."

Pay attention to the emphasised part of the above quote: this suggests that the general public were familiar with the situation of Voyager, if not some of their adventures. Hence, considering the Enterprise-D is the Federation's flagship, I would expect that they probably would be considered to be famous.

Going to go off on a little tangent but Picard may have been famous for being an incredibly skilled archaeologist before becoming famous (possibly) as a Captain. It was mentioned that in 2339, Picard was given a chance to:

"become the foremost archaeologist of his generation"

And at the age of 34 which might be considered young to take up such a position - this could have made him at least a little famous.

The very person who offered this opportunity was his professor, Doctor Richard Galen who was considered:

"the most renowned Federation archaeologist of the 24th century".

Picard refused this offer but the fact that he was given such a recommendation could have gained him some fame.

The conflicting and rapidly shifting data caused the Ferengi to target and fire on the wrong vessel, and since the Stargazer opened fire as soon as it dropped out of warp, the Ferengi ship had no time to maneuver out of the way before the phasers and photon torpedoes hit. The Ferengi ship was destroyed.

The Picard Maneuver was also inserted into the Starfleet Academy textbooks, which has got to mean something! (TNG: "The Battle")

As mentioned here, Patrick Stewart (and other members of the cast) was so annoyed with the costume that Picard can be seen tugging at this shirt on mumerous occasions. There's a video on youtube showcasing this. Hilarious!

In addition to the answers above we know that Geordi is famous, at least in the medical profession. From the first episode:

Crusher: Naturally, I've heard of your case. The visor implants you wear...
La Forge: Is a remarkable piece of bio-electronic engineering by which I quote "see much of the EM spectrum ranging from simple heat and infrared through radio waves et cetera, et cetera," and forgive me if I've said and listened to this a thousand times before.

An example of Data's fame comes from the Voyager episode Prototype:

TORRES: I guess, you could say that the robots we use are servants in a manner of speaking. But they aren't sentient like you. In fact, we have only one sentient artificial life form in our society, and he is treated the same as any human.

TORRES: That's right. He works on a ship just like you and I. He wears the same uniform I do.

TORRES: He has a name like the rest of us. Data.

3947: Data. I would like to be acquainted with this Data.

Another example of Data's fame shows how it has spread beyond the Federation to the Klingon Empire in the TNG episode The Chase:

NU'DAQ: Commander, your reputation for physical strength is known even in the Klingon Empire. You are familiar with the B'aht Qul challenge?

However, there is a chance Nu'Daq is buttering Data up because the Klingon wants Data to leave Starfleet and help the Empire solve the galactic DNA puzzle.

On the subject of Klingons, there are many examples of Worf's fame within the Klingon Empire, and Picard's involvement in the struggle for leadership of the high council would likely make them both well known to anyone following major political news of the Alpha Quadrant. An example from the TNG episode Rightful Heir:

GOWRON: Don't you see? This is exactly why they want you to join them. Because your brother sits on the Council and your voice carries weight in the Empire. They want you to influence others to follow them. Worf, we fought together once side by side to keep the Empire from being torn apart.

We don't know if the maneuverings of the council and the great houses of the Empire are only relevant to the Klingon elite, but it seems as if whenever Worf interacts with another Klingon, they already know about whatever current drama is happening with the House of Mogh.

If social media continues to evolve, and personal search results give people their customized bubbles of news, anyone and everyone can be famous to their own followers.

There are orders of magnitude more people, too, across the galaxy. So many will "follow" the Enterprise-D and select individual crew. If news is generally streamed not broadcast, you'll see what interests you.

There might be ten million Picard fans, but one fan can be alone in his city.

In a post-holodeck world, and real achievers will be famous.