I'm looking for a book, the plot involves something along the lines of:

On an alien planet a black crystal exists which when touched turns people into crystal or stone (petrifies them). This becomes contagious so the population is rounded up into a prison camp.

They escape the camp and go and survive in the nearby hills where they find a plant which they brew in a tea and eat which is the antidote to the crystal petrification.

No idea of the author or title, but I vaguely remember the front cover being purple-ish. I remember reading it in 1998-1999, but it may have been an older book.

They 'mine' the material and bring it back to their planet which causes the outbreak.

People's limbs petrify and people are limping with the petrified limb.

Definitely not a 100% match but there are some similarities to Sentenced to Prism. Matches are crystal life, infective, sounds like a prison book, purple on cover, published in 1985. Dissimilarities are the tea cure (at least I don't remember that) and the plot element of rounding people up into camps. 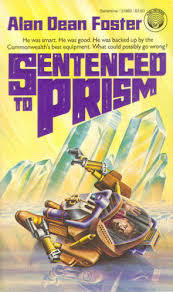 14
Story about human space explorers who run into alien telepath space crew
17
Help Identifying a Sci-Fi Book: Humans transported to alien world and given tasks to escape
6
book identification about kid turning into plant
1
Books about people turning into dragons
8
Book about a girl who suspects her neighbor of turning people into cats
9
Book about a girl painfully turning into crystal; one of her companions take her pain for short periods
7
Off the wall SF book, about a missing girl and a doctor turning people into giant bugs
9
Book about people turning to stone from power use
3
Anime where a girl is reborn as a baby on different worlds to find pieces of a crystal